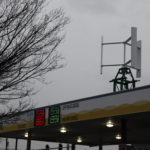 The vertical wind turbine on the roof of the Zarco 66 Earth Friendly Fuels Station at Ninth and Iowa is part of the station's ongoing green initiatives.

The goofy-looking white thing spinning on the roof of the Zarco 66 Earth Friendly Fuels station at Ninth and Iowa isn’t just a fancy-looking top.

It’s a vertical wind turbine, said station owner Scott Zaremba. And it’s part of that station’s ongoing efforts to incorporate more green initiatives. “We want to take some of these concepts and move them out into the community,” he said.

The turbine costs about $10,000, before electrical and engineering work are taken into account, Zaremba said. The turbine is anticipated to power about 5 percent of the total needs of the location.

It hadn’t been hooked up to the electrical grid as of late last week, though it was spinning on top of the roof with enough wind, Zaremba said.

The station is working with the Environmental Protection Agency to introduce a number of environmentally friendly initiatives, including green roofs, cleaner fuels and now an individual wind turbine for residential or business use.

The EPA has encouraged Zaremba to use the site as a space for a variety of projects. However, that doesn’t always mean the EPA will foot the bill — Zaremba funded the wind turbine himself.

It’s a project that has been in the works for years, he said.

The station lets community members know what’s possible in case they have similar ideas for their residence or business.

“That’s just another aspect of the green energy gateway” at the station, he said.