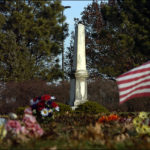 The gravestone of Thomas Barber rises in Pioneer Cemetery on Kansas University's west campus. Barber was killed 150 years ago during the Wakarusa War.

Kenneth Armitage, a retired Kansas University biology professor who taught for 40 years, says that if he’s buried anywhere, it’ll be at Pioneer Cemetery on West Campus.

“I just feel that I’m a part of Lawrence,” said Armitage, also the president of the Historic Mount Oread Friends, a group dedicated to campus preservation. “I’ve been a part of the university for my whole career. I would feel more at home there.”

The cemetery, which serves as trove of Lawrence history that harks back to the Bleeding Kansas era, continues to serve an ongoing purpose today as a way to honor people who have contributed to KU.

Since the cemetery was deeded to the KU Endowment Association from the city for $1 in 1953, more than 450 faculty and staff members have been buried in Pioneer Cemetery, which is near Irving Hill and Contant roads.

Monte Soukup, KU Endowment vice president of its property division, said the organization typically gets from six to 20 requests for burials per year, and about 1,000 plots remain available on the site.

He said the association and the Historic Mount Oread Friends have done work in recent years to ensure that the cemetery is well-preserved. After recent surveys of the markers, one done using GPS technology, Soukup said the association has a much better idea of how to plan for the future.

The cemetery has benefited from monument restoration, a wayfinding system to help people locate gravesites and other historical signage.

Many members of the public stop by, and the cemetery occasionally gets trips from local schools.

“It gets some pretty good traffic as far as cemeteries go, I think because of the historical aspect,” Soukup said.

It is the final resting place for three KU chancellors — Deane Malott, W. Clarke Wescoe and Raymond Nichols — along with a host of other contributors to KU, many of whom have buildings named for them on campus including professors Takeru Higuchi, Fred Kurata, Raymond Moore, Charles Oldfather, Henry Shenk and Edward Smissman; former Dean of Women Emily Taylor; and administrators Fred Ellsworth of the alumni association and Irvin Youngberg of the endowment association.

Today, because of limited space, KU Endowment has set certain eligibility requirements for people who would be buried there:

• University staff — full-time faculty members or those serving in an unclassified equivalent administrative appointment at the time of retirement or death — who served the university for at least 15 years.

• People who have given distinguished service to KU, including chancellors, vice chancellors and deans; KU Endowment trustees; and members of the KU Alumni Association board of directors.

• Spouses of any eligible person.

The KU dignitaries buried there join others who have been in the cemetery since the time of Quantrill’s raid on Lawrence.

In fact, all the victims of the Bleeding Kansas skirmishes were originally buried there before many were moved to Oak Hill Cemetery after it opened, said Karl Gridley, a local historian and member of the Historic Mount Oread Friends group. About six Quantrill victims are still buried in Pioneer Cemetery, he said.

The most famous of those is Thomas Barber, a freedom fighter memorialized both with a recently renovated obelisk in the cemetery and a poem by John Greenleaf Whittier.

The group recently found that one of the headstones thought to be lost had in fact wound up in the hands of the Kansas Historical Society. Gridley said he’s working with the group to get a cast made to be brought back to its original site.

“I think it’s wonderful that people discover it on their own and are intrigued by who’s buried there,” Gridley said.

Armitage said that the cemetery remains a bit of a secret to many — including some in the KU community — perhaps in part because it was abandoned for so many years.

“Unless you get up and walk that part of campus, you might never know it’s there,” he said.