Colby Couple raise billboard of Jesus on I-70 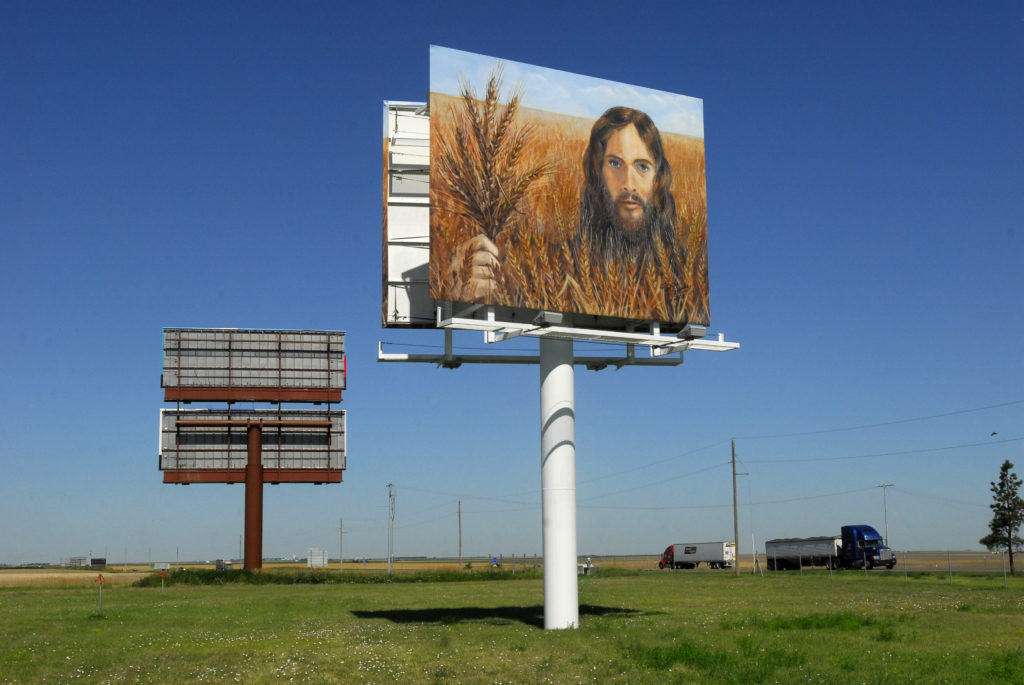 A painting of Jesus in a wheatfield hangs along Interstate 70 last month in Colby. Tuffy and Linda Kay Taylor erected the billboard for Colby residents and motorists who travel down Interstate 70 at all hours of the day and night.

Colby ? For Tuffy and Linda Kay Taylor, it’s a billboard with a powerful message.

Not just for them, they hope, but for Colby residents and motorists who travel down Interstate 70 at all hours of the day and night.

It’s a billboard with no words, however. Only a picture of Jesus Christ in a golden field of wheat, holding up a sheaf — the bounty of life.

“It’s a silent message,” said Tuffy Taylor, one of the key people behind the sign. “It’s something very special to my wife and I. To me, it’s one of those things that were so positive in my life.”

The Taylors are the ones behind the construction and installation of the billboard. They weren’t alone, however, as Commercial Signs of Colby helped assemble the pipe and put it up.

Now, it ministers to those passing by, in whatever form they want it to be.

“Everybody has their own beliefs,” Linda Taylor said, and that’s why there’s no message on the billboard.

The Taylors have had to put quite a bit of faith into what they are doing, considering they bought what had been an outlet mall, Southwind Plaza, on the southwest corner of Colby just weeks after 9-11 happened.

“It’s been a battle,” he said of taking such a large property and turning it around from near zero occupancy to what it is today. They’ve also built a Dodge dealership on the property, near the Jesus billboard.

Tuffy Taylor said he has been inspired by photos and billboards in different areas.

“The one that inspired me was one by Norton,” he said.

When he returned home to Colby, he told his wife about it: “Maybe that’s something we need to do?”

That set in motion a series of moves. Linda Taylor runs the Kansas Country Store in the shopping center, and has a woman from Concordia, Phyllis Shanks, who paints on a variety of mediums, including rocks.

“We called her and asked her if she would draw that,” Tuffy Taylor said of how the artwork developed.

Then they had to figure out how to display something that could be seen by so many other people. That’s where Commercial Signs came in. Tuffy Taylor was told what materials would be needed, and so he contacted a brother in Oklahoma who found the pipe for the billboard.

Tuffy Taylor made the drive to Oklahoma to get the pipe and returned to Colby. “My wife and I did the majority of the financing,” he said.

But he’s not so willing to say how much that ultimately was, instead giving credit to donations coming from others. He did, however, admit that had they hired the whole thing done, it would have cost $34,000.

The Taylors are paying the monthly light bill, which amounts to about $200.

But they aren’t taking credit for the billboard. No place will you find any indication that the Taylors are behind it, and Colby officials are in the dark as well.

“My idea, people can look at that and they can make up their own mind,” Tuffy Taylor said of the message the billboard sends. “They don’t have to be told.”