Collins, Aldrich announce plans to return to KU next season 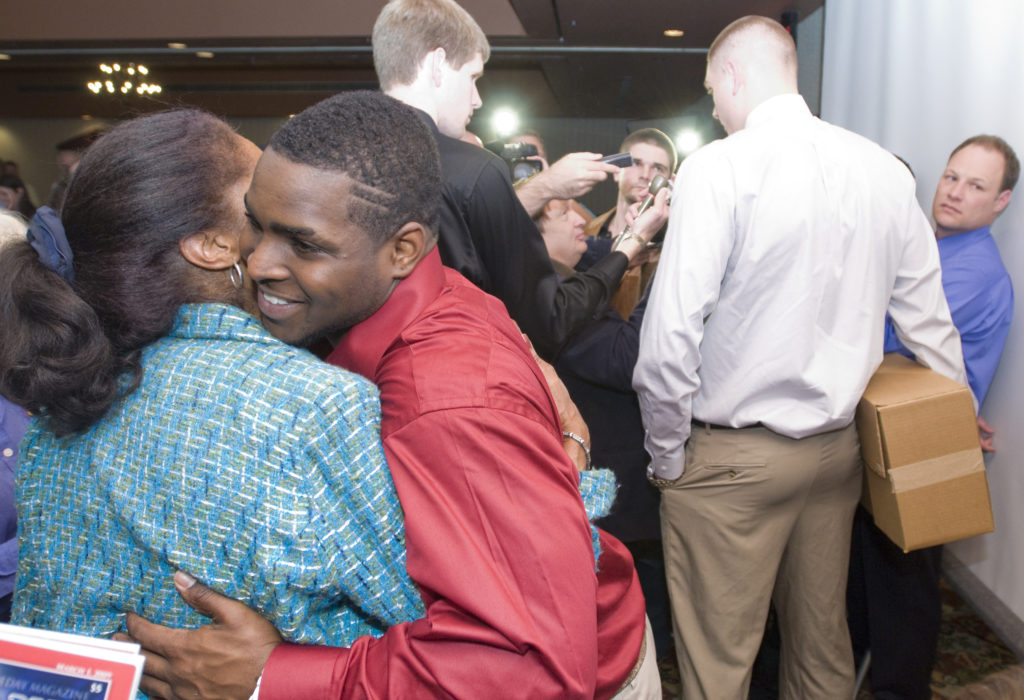 Kansas guard Sherron Collins (in red) gets a hug from Representative Barbara Ballard as center Cole Aldrich (in white) talks with media members after the KU basketball awards banquet. Collins and Aldrich announced at the banquet Monday at the Holidome that they would return to KU next season and not jump to the NBA. 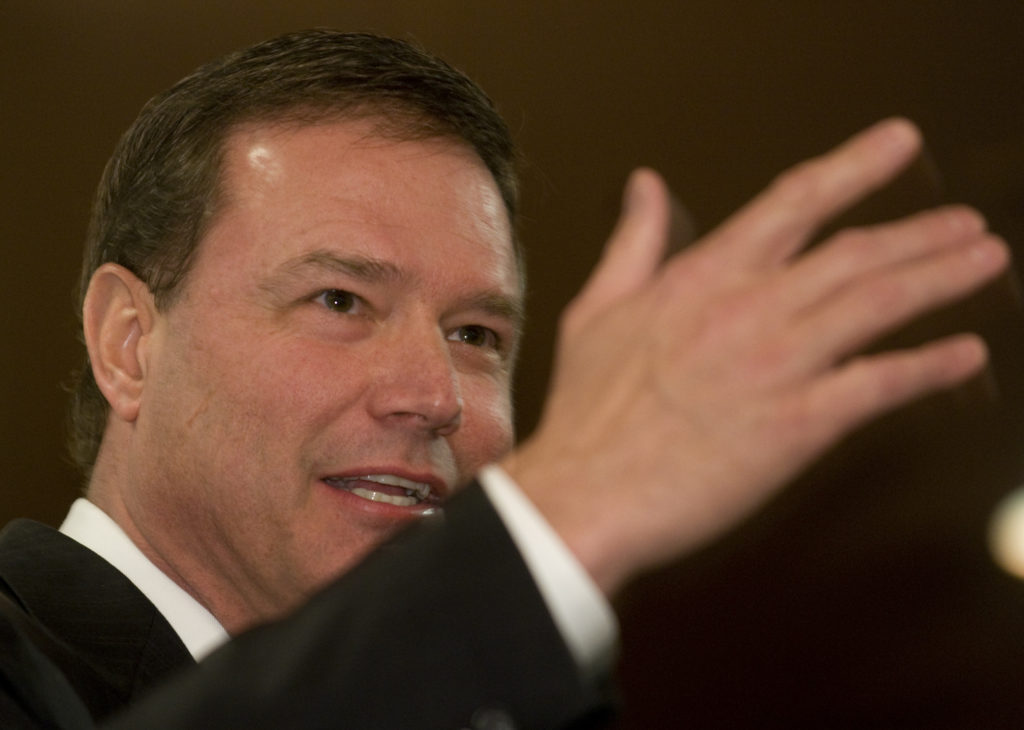 Kansas coach Bill Self cracks a joke as he recognizes members of his staff for their contributions in this 2009 file photo. Bill Self took time during his Elite camp for blue-chip high school prospects to meet with the Journal-World in support of Perkins. 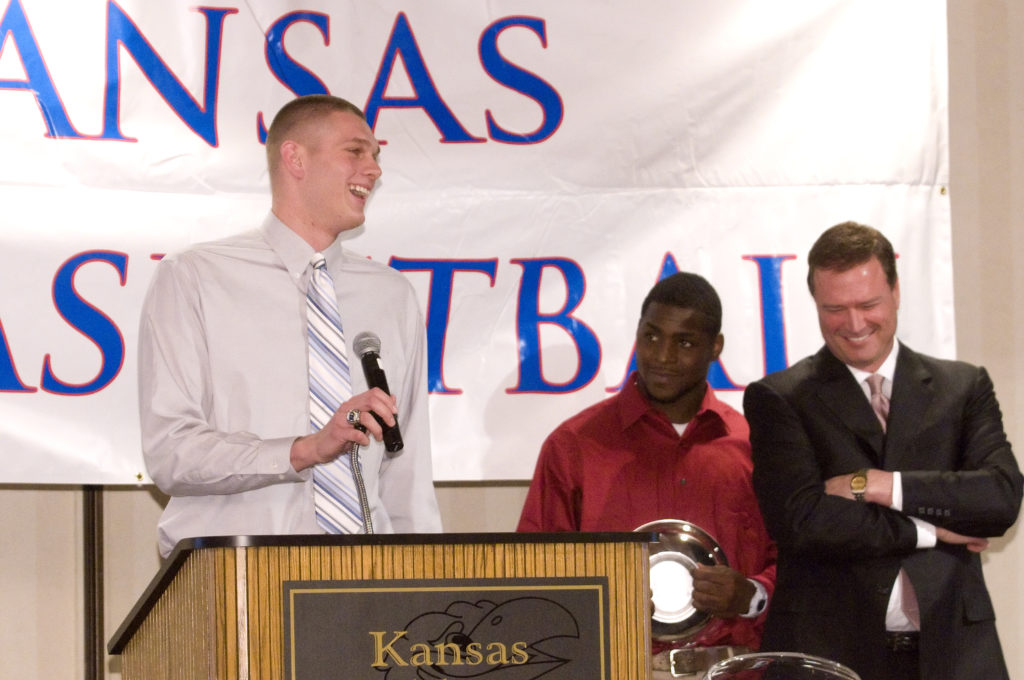 Kansas center Cole Aldrich, left, entertains the crowd at the basketball awards banquet April 13 at the Holidome, next to Sherron Collins, center, and coach Bill Self. Aldrich and Collins recently expressed no regrets in electing to stay in school for another year. The NBA Draft is tonight in New York.

Three hundred or so fans stood and roared their approval after the two first-team All-Big 12 picks revealed they’d put their NBA dreams on hold and would be back for the 2009-10 season.

“That’s two good recruits we just signed for next year,” KU coach Bill Self said, moments after sophomore center Aldrich, then junior guard Collins, confirmed they were staying at KU one more year.

“I can’t wait till next year when we try to go for one more (national championship),” Aldrich said.

Once the applause died down, Self asked Aldrich if that meant he was definitely returning to KU.

“As long as you don’t throw me under the bus next year,” Aldrich cracked.

Next, it was Collins’ turn at the microphone.

“It was a great year. Like Cole said, I will be back next year,” Collins declared in ending the 21?2-hour banquet on a high note.

Aldrich, Collins and Self met with the media after the banquet to explain the decision-making process.

Turns out it was a slam dunk for both players.

“The thing that was most unique was, neither one wanted any information. I didn’t get any information for either one of them. They said they didn’t need it,” Self said of information from NBA executives about where they might be selected if they entered the 2009 Draft.

“Cole said, ‘If I’m here one more year, I can come so close to getting my degree, which will guarantee me graduating from Kansas, and I’m having the time of my life.’

“Sherron will graduate because he only needs 20 hours after this year. They will have a chance to be All-American and do what they both want to do: be part of a legacy that brings home two national championships,” Self added.

Collins — likely a second-round draft pick in the June draft — informed Self of his decision at the State Farm All-America Awards banquet, which honored 10 players, at the Final Four in Detroit.

Collins said he figured he could increase his NBA Draft stock by staying another year. More importantly, he knew a decision to stay would please his mother, Stacey Harris.

“My mom had bugged me about having a Senior Day the whole year. She gets her Senior Night. I get my degree, and hopefully we’ll get another national championship,” Collins said.

Harris, who attended the banquet, admitted she was in favor of her son putting off the NBA another year.

“Ever since his freshman year, I said, ‘I need my Senior Day,”’ Harris said. “It’s not about basketball to me. You need an education regardless, and the people here are great. He made a good choice.”

Collins also conferred with fellow Chicago Crane High graduate/NBA player Will Bynum, who told him it would be a good idea to return to school.

“Will Bynum told Sherron in his home, ‘There are only two places for you to play — the NBA or Kansas — and if you are not 100-percent sure the NBA is right for you this year, then make sure you stay at Kansas,”’ Self said. “That’s a guy he grew up idolizing. I think he (Collins) made a good percentage play based on where he is and where he could be at the end of next year. He could help himself a lot (by staying).”

Meanwhile, Aldrich decided he’d be back for his junior year while sitting in his Jayhawker Tower apartment shortly after the conclusion of the season.

“I wanted to take some time to take in everything,” Aldrich said. “I was watching the highlights of the season back in my room on my computer. I was getting goosebumps. I was like, ‘I’ve got to come back.”’

He spoke with Collins about the matter.

“We talked a little bit. I said, ‘I am having way too much fun. I want us to do a lot of things very few people have done,”’ Aldrich said. “Sherron and I talked about this … we could be those special names in Kansas history that all the little kids look up to.”

They didn’t encourage him to go pro despite the fact many experts said he’d be a lottery pick, guaranteed millions of dollars.

“My mom was the one like, ‘Hey, you’ve got to go back. College is the time where you have most of your memories,”’ Aldrich said.

“Nobody has graduated in my immediate family from a university. That’s huge for me,” he added.

Aldrich won’t earn enough hours to graduate after his junior year, but said he’d complete work on his degree in Lawrence or in an NBA city the following year.

Self said fans should not expect Aldrich to be back for Year No.4.

“There will not be any questions about, ‘Is Cole staying another year after this one,”’ Self said.

“He is coming back for his junior year. I can’t see it being anything past that if he has a good junior year. … With Sherron being a senior, these guys know the safety net is not there any more. They will be more in line than they ever have been making sure next year is special.”

KU assuredly will be ranked in the top five next preseason, maybe even No. 1. Collins’ mom is confident KU’s collection of players could claim the second national title in three years.

“I want the old ring (from ’08). He gets the new ring,” Harris joked of a possible deal with Collins.

“I would think they would do everything possible to make sure they go out in style,” Self said.

Awards: There was just one award presented at the banquet for the second straight year. Self decided last year that it was too difficult to single out individual players and scrapped various awards handed out in the past.

Also in the mix next season will be newcomers Elijah Johnson, Thomas Robinson and Jeff Withey (after first semester).

Currently at 12 scholarship players (one under the limit), KU is still in the running for four players: Xavier Henry, 6-foot-6 from Oklahoma City; Lance Stephenson, 6-6 from Brooklyn, N.Y.; John Wall, 6-3 from Raleigh, N.C.; and Daniel Orton, 6-10 from Oklahoma City, who may ask out of his letter of intent at Kentucky.

“We can always get better. We have a scholarship to do so. We are recruiting guys,” Self said. “Even if this team returns status quo, I think we have a chance to have a really good team. If we add anything through the spring process, it would solidify our chances for making a deep run next year.”