No piece of her soul lost: Survivor of breast cancer shares story at tea 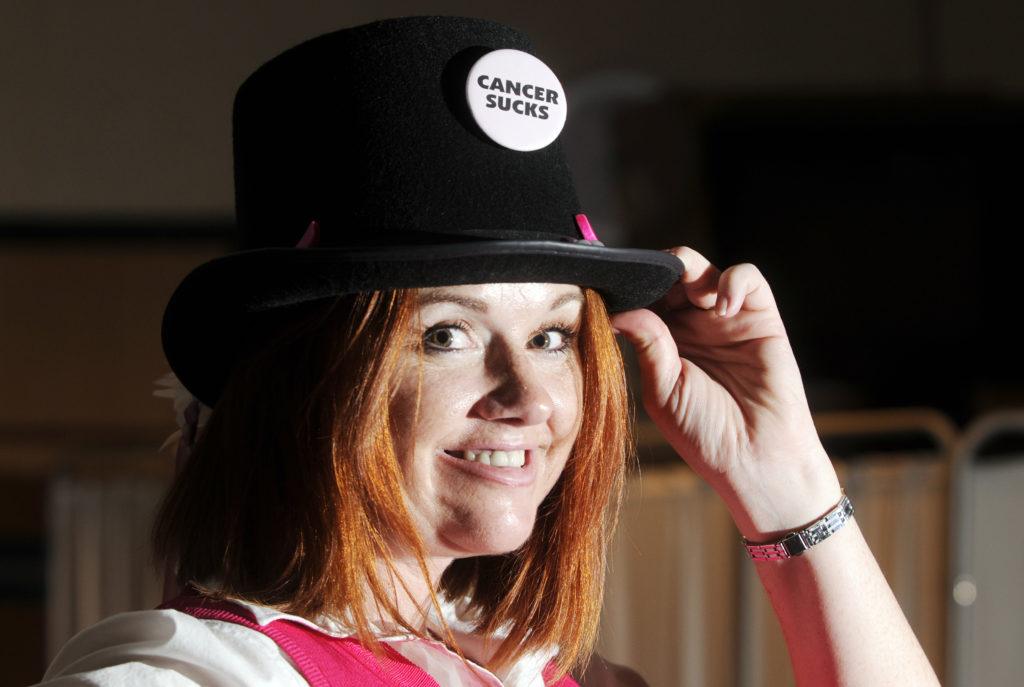 It was 2006, five years after receiving a breast cancer diagnosis, 15 months of chemotherapy and two invasive surgeries, that Lisa Covington, 38, heard the song, “I Run For Life,” which has become her personal theme song in a way.

“Each time I heard it, I was completely overwhelmed with emotion,” said the mother of two sons and stage four chronic cancer patient.

“They can do surgery after surgery and pump poison into my body, but they are never going to take a piece of me, my soul,” Covington said.

At the 10th annual Betsy Beisecker Memorial Tea on Saturday at Lawrence Memorial Hospital, 325 Maine, Covington sang that song to about 75 people, many breast cancer survivors and all supporters of increasing awareness and fighting the cancer.

Before Covington ever learned of her diagnosis, she only dreamed of singing in front of people. Her perspective changed because of the cancer, and she was inspired to move from the “corporate ladder” in Lenexa to various stages singing for the rock-and-roll Kansas City band The Peabodys. She has also become an activist and advocate for breast cancer awareness and said she would take advantage of every opportunity to share her story.

“I wanted to focus on what was important, and I had to change my whole set of goals,” she said. “I wanted to be in a band. I wanted to make a difference in the world.

“Me being able to sing at events, inspiration events like this, it kind of lets me make a difference and sing at the same time.”

When she shares her story, as she did Saturday, her main message is to keep a positive attitude and live in the moment because that’s what kept her fighting, she said. Also, she said to “know your body” and communicate with doctors. Covington had to convince nurses and doctors to pay attention to her concerns following a breast self-exam, she said.

The tea is a celebration of survivors and a good opportunity to educate people about early detection, said Judy Hollingshead, chair of the tea party, LMH nurse and a breast cancer survivor.

“I don’t think a diagnosis of breast cancer is a death sentence, and not too many years ago, that was how it was viewed,” she said.

The tea party also turned into a hat party of sorts this year. Women were invited to wear outrageous hats, which included a jungle-themed hat and Covington’s black top hat with a pink “Cancer Sucks” button.

The tea was sponsored by the Oncology Nursing Society Breast Cancer Awareness, a volunteer organization made up of LMH oncology nurses and health care professionals in Douglas County. The tea was started to honor the legacy of Analee E. “Betsy” Beisecker, a professor of preventive medicine at Kansas University and breast cancer patient who died in 1997.