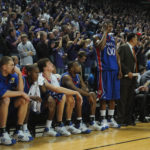 Above, Kansas forward Darrell Arthur (00) shows his displeasure as the final moments tick away in the Jayhawks' 84-75 loss to Kansas State. In top photo, K-State's Bill Walker (12) pounds his chest as he stands on press row. Wednesday at Bramlage Coliseum, the Wildcats snapped a 24-game losing streak to the Jayhawks in Manhattan.

Kansas State’s freshman-driven slaying of second-ranked Kansas in front of a loud, proud Bramlage Coliseum crowd evoked memories of Michigan’s Fab Five freshman class. The K-State rookies showed that much confidence, that much talent, that much savvy.

Reserve point guard Jacob Pullen, more so even than Michael Beasley and Bill Walker, drove the way to the finish line of an 84-75 victory.

Guards tend to come out of Chicago more ready for the big-time than most, as Sherron Collins showed a year ago by putting up 20 points to lead KU to its 24th consecutive Manhattan victory.

The baby-faced Pullen, who must have been standing on his self-confidence when he was measured at 6-foot-1, upheld the Proviso East guard tradition that sent Doc Rivers and Dee Brown on to big things.

Usually, Russell Robinson, Mario Chalmers and Collins have a way of melting the confidence of opposing guards, even on the road. They dive and dart, slap and swat and generally frustrate foes into retreat mode. On this wild night, Pullen blew past them, all the way to 20 points, four assists and one turnover. He made all 10 of his free-throw attempts. His length-of-the court drive, made with Robinson trailing him most of the way and then fouling him, resulted in a three-point play that put the Wildcats up, 73-61, with three minutes left.

Beasley, Walker and Pullen combined for 67 points. Afterward, in another Fab Five-like Michigan move, Walker joined a couple of teammates standing on the scorer’s table, long arms spread wide as the students stormed the court.

Walker got the Wildcats going early, Beasley carried them in the middle, and Pullen drove them at the end.

Pullen’s lone turnover – he has just five total during the active six-game winning streak – was greeted with a penetrating death stare from first-year coach Frank Martin and loud, acerbic words.

“I came from coaches who all they ever did was scream, scream, scream, so when Frank does it, it doesn’t bother me,” Pullen said. “I look at it as it means he has confidence in me or else he’d pull me from the game. You’ve got to have thick skin.”

The harshest words were sent toward KU’s players from a crowd that never lost its insane energy level.

More than any indictment of Kansas (20-1), this was a signal to the college basketball world that when discussing Final Four contenders, this young, ultra-talented team recruited to the Little Apple by Bob Huggins must be in the conversation. Huggins stayed just one year, but what a mark he made.

Twenty seasons ago, the Kansas schools faced each four times. If that happens again this season, and this time the final one is in the Final Four, it wouldn’t be much of an upset. K-State is growing that rapidly.

Beasley, who dominated the first half of the second half, had guaranteed a victory and didn’t seem to understand the ensuing fuss. He still doesn’t.

“I knew my team was capable of beating anybody,” he said.

It will be a great deal tougher to do next time, inside Allen Fieldhouse.