Modified vehicle tested in search for tunnels under U.S. border 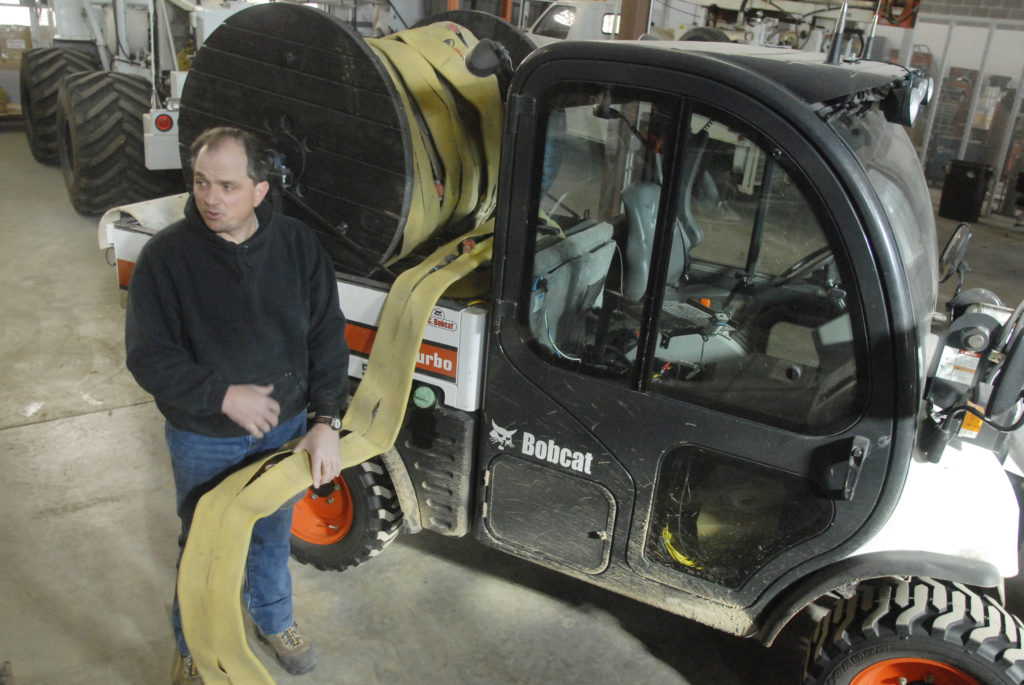 The key to finding secret, underground tunnels along the U.S. border might be parked in a Kansas Geological Survey garage in Lawrence.

It’s a converted Bobcat loader packed with electronic gear and a computer. On the front is a 60-pound weight inside a cylinder and on the back is a spool of old fire hose fitted with sensors.

KGS, which is based at Kansas University, has for years been testing the effectiveness of seismic sound waves to determine what’s under the ground. Since the late 1990s it has periodically received requests from the U.S. Army Corps of Engineers to do that testing along the California-Mexico border.

The information obtained by KGS was passed on by the Army to other agencies, possibly the Border Patrol or the federal Drug Enforcement Administration, said Rick Miller, associate scientist with KGS.

The seismic equipment has been used to find abandoned mines in Kansas, but KGS doesn’t always know the outcome of their work on the border.

“A lot of the stuff we work on and the information we get just goes into a black hole,” he said. “We will never know what happened.”

In February 2002, U.S. authorities announced the discovery of an elaborate tunnel 20 feet underground built to smuggle drugs. It ran 1,000 feet from Mexico under the border to a pig farm in California. A month earlier, Miller and a KGS crew were invited by the Army to test its seismic equipment in an area that was only a quarter of a mile away.

“It was an area where they said their intelligence indicated there were some tunnels,” Miller recalled. “Based on our testing it looked like we could see some tunnels.”

But Miller and his crew never heard anything about their findings, he said.

On a trip to the border town of Tecata, Calif., KGS crews were told to do their research covertly.

“If anybody asked, we were installing cable along the border from Tecata on the Mexican side to Tecata on the U.S. side,” Miller said.

Another trip to the border near Tijuana, this time at night and accompanied by DEA escorts, drew gunfire.

“We got shot at a couple of times, so the DEA packed us up and said that was enough,” Miller said.

Researchers use the Bobcat by driving along an area and using the cylindrical mass on the front to pound the ground every few feet. The pounding causes a seismic shock wave to move through the ground, Miller said. Sensors inside the fire hose strung out behind the vehicle track those sound waves. A computer and electronic equipment in the cab take the information picked up by the sound waves and use it to determine what it looks like below the surface.

“We can pop the ground and see several thousand feet in one second,” Miller said. “Sound waves travel five to seven times faster in the ground than through the air.”

Researchers get a reading of what a subsurface area looks like and can check for anomalies, or voids, below ground. Once a subsurface area is checked the first time, that information can be used to detect changes when taking future readings.

Seismic readings can be interfered with by a variety of geological and manmade sounds, such as traffic. KGS is working to develop technology that will better analyze the readings and subsurface imaging.

Homeland Security is interested in technologies that can be used to develop sensors along the U.S. borders to detect tunnels, according to the February issue of the magazine “Popular Mechanics.” The magazine lists the methods considered to be the most promising and who is working on their development. KGS’ work with seismic waves is on that list. Other methods considered include ground-penetrating radar, electrical resistivity, microgravity and cosmic rays, according to the magazine.

The military has been interested in the work KU and KGS has done with seismic waves as far back as the 1980s. KU geophysicist Don Steeples traveled to South Korea as a consultant to the Army in its search for tunnels along the demilitarized zone along the border with North Korea. KGS equipment was not being used, and the Army was working with a private contractor. Four tunnels were found, but only one was because of geophysical methods, said Steeples, who now is KU vice provost for scholarly support. The others were a result of human intelligence and drilling, he said.

“There has been a lot of advancement in the technology in the last 25 years. No question about that,” Steeples said.