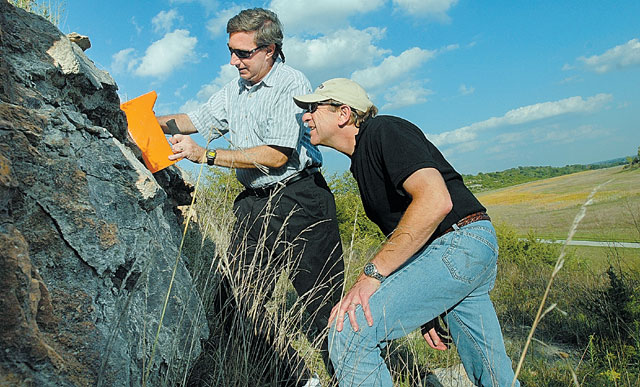 Robert Goldstein, chairman of the geology department at Kansas University, left, and Evan Franseen, head of stratigraphic research at the Kansas Geological Survey, observe the results from a spectral scintillometer during a demonstration on a rock wall Thursday near the Clinton Lake spillway. The two have developed a technique for testing the quality of limestone used to pave roads.

Most people don’t think about the quality of the rock under the pavement on which they drive – even after they hit a pothole.

But quality matters to those who sell the rock and pave the roads.

“We don’t want to put a product out there that’s supposed to have 20-year lifespan that all of a sudden has a five- or six-year lifespan,” said Robert Henthorne, chief geologist with the Kansas Department of Transportation.

Kansas University geologists have developed a new technique for quickly measuring the quality of limestone before it’s extracted and used to pave roads. They say the technique could help the industry by improving quarrying and saving money.

“The cost of having to repave is way, way up there,” said Robert Goldstein, chairman of KU’s geology department. The technique “ultimately should save taxpayers’ dollars. It should lead to smoother highways with fewer potholes.”

But not all limestone is created equal. Multiple factors, including the composition when the sediments were deposited millennia ago, can affect the quality.

With KU’s new technique, quarries would use a specialized Geiger counter to measure for the amount of clay in the rock. The clay would be detected through measures of potassium, uranium and thorium.

Finding clay in the limestone isn’t good. Its presence marks a stone of diminished quality. 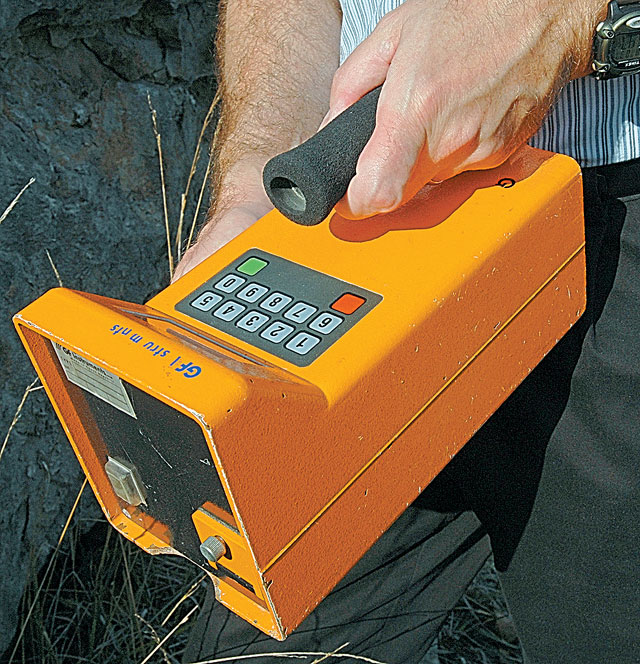 A spectral scintillometer, displayed by Robert Goldstein, measures natural radiation from potassium, thorium and uranium to provide a reading of clay content in limestones. Goldstein says that is a major factor in controlling durability of crushed rock in concrete.

Those who work in quarries would then plug the measurements into an Excel program, developed at KU, that would give the predictability that the stone is high quality or not.

All could be done in about a day’s time. And that’s a quicker turnaround than the current system, in which quarry operators call on the Kansas Department of Transportation and wait months for results, said Evan Franseen, head of the stratigraphic research section at Kansas Geological Survey.

“We’re confident that the technique works,” Franseen said. “Now it’s a matter of selling it and getting people to use it.”

To measure the quality of rock, KDOT currently takes samples by hand from a site and runs them through a series of tests in Topeka.

“I think it’s a very good technique that needs some exploration and additional testing,” Henthorne said. “It shows a lot of promise.”

The equipment costs about $8,000, Goldstein said.

KU has a patent pending on the technique.