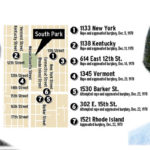 Charles Hunter is shown in a photo from the late 1970s, left, and in a recent prison photo. Despite being convicted of a series of rapes, attempted rapes and burglaries in downtown Lawrence in December 1978, Hunter maintains his innocence.

Hunter, while maintaining his innocence, has remained in the Kansas state prison system for nearly three decades.

And for all of those years, rape kits containing DNA evidence that might prove Hunter’s claims of innocence remained stored, and untested, at Lawrence Memorial Hospital.

But not for long.

Under a Kansas law that allows convicts to petition the court to have previously untested DNA examined, Jean Phillips, a lawyer from the Kansas University School of Law Defender Project, filed a motion recently with the district court seeking to have the evidence tested.

The Defender Project, which assists inmates with post-conviction cases, is acting as local counsel in conjunction with the New York-based Innocence Project, a national organization that works to use DNA testing to exonerate wrongly convicted people.

District Attorney Charles Branson said there are three slides with DNA evidence available for testing in Hunter’s case. The slides were stored at Lawrence Memorial Hospital until recently, when the evidence was collected by the DA’s office in preparation for possible forensic testing.

Branson described the evidence against Hunter as a “pretty solid case,” but he will not oppose the move to have the evidence tested.

“There’s not really any reason to oppose,” Branson said, explaining that the Innocence Project will pay for the tests and no state funds will be used. Branson said this is the first such motion his office has received since he took office in 2005.

The evidence will be sent to a DNA testing facility chosen by the Innocence Project. Branson said that if the testing provides results that cast doubt on Hunter’s guilt, the court will have a variety of options for dealing with the case – including granting a new trial.

But after 30 years, Branson said, there are no guarantees the samples will provide useful results.

“(The evidence) will be a real challenge to test,” said Branson.

A spokesperson for Orchid Cellmark, a company that has tested DNA evidence for the Innocence Project in the past, said there are too many variables regarding DNA testing to accurately predict how long testing of DNA material will take or how much it will cost.

A series of crimes

In December 1978, a string of rapes and home invasions occurred in Lawrence. The crimes followed a pattern: A young black male breaks into a home, holds a knife to the throat of the woman inside, and commits, or attempts to commit, rape.

Between Dec. 5 and Dec. 22, the attacker committed four rapes, attempted two others and invaded several homes.

Lawrence police arrested 16-year-old Charles Hunter, who, according to investigators, confessed to the crimes while detailing the location and specifics of the rapes and home invasions.

Several other pieces of evidence also pointed to Hunter as the attacker.

A finger splint was left behind by the attacker at one of the crime scenes. Hunter had recently been treated and supplied with a finger splint after receiving stitches at Lawrence Memorial Hospital.

At the same crime scene, investigators found a green stone left by the attacker. A ring missing two green stones was later recovered from Hunter’s apartment.

Pubic hair discovered by investigators was “comparable” to Hunter’s, but modern-day DNA technology that might have conclusively identified or disqualified Hunter was not available in 1979.

In addition, two of the victims positively identified Hunter as the attacker, though several other victims were unable to do so.

Court records state that Hunter had a history of delinquency in the juvenile court, but none of his previous crimes were as serious as the ones he was charged with: four counts of rape, two counts of attempted rape and eight counts of aggravated burglary.

Hunter was found competent to stand trial after examination by doctors at Bert Nash Mental Health Center, despite physicians’ findings that Hunter suffered from a mental illness and experienced delusions.

Although his appeal was rejected, Hunter has continued to file numerous unsuccessful appeals with the district court over the years. In those appeals, Hunter says that an inmate named “Marvin,” who Hunter says died in 1983, was the real perpetrator of the crimes. Hunter also says that Gene Simmons, of the rock band Kiss, is an “advocate” for Hunter and his case.

In an appeal filed with the court in 2005, Hunter wrote of his case, “I was plotted against by a Satanic Terroristic official and Opperatives, then I was cast into prison for rapes that the culprit, a one inmate ‘Marvin’ committed.”

According to the Kansas Parole Board, Hunter, now 46 and currently housed at Larned Correctional Mental Health Facility, was first eligible for parole in 1996 and will not be eligible again until December 2009.