KU debaters ranked No. 1 in the nation 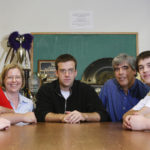 The Kansas University debate team is ranked No. 1 in the country for the second time in three years. From left is KU sophomore Dylan Quigley, of Wichita, junior Chris Stone, of Derby, graduate student and coach Jan Hovden, of Killdeer, N.D., senior Brett Bricker, of Wichita, professor and coach Scott Harris, freshman Mark Wilkins, of Topeka, and freshman Mathew Petersen, of Wichita.

It’s been a good year for student competitors at Kansas University.

KU had the Orange Bowl victory in January and the basketball national championship this month. And, of course, the KU debate team ended the year as No. 1 in the nation for the second time in three years.

While Kansas State is the only Kansas school that touts its debate titles with signs on I-70, it’s the KU squad that finished better than everyone else this year. Led by coach Scott Harris, the traveling Jayhawk debaters competed in 22 tournaments.

“We have students who are willing to work hard and make a commitment,” Harris said. “We have a program that has the depth needed to win competitions.”

Though the Jayhawks did not win the year-end tournament, they scored highly enough throughout the year – including 10 first- or second-place finishes – to pick up the national title.

“I think we knew this was going to be a positive season because of the work we did during the summer,” said senior debater Erum Shah.

Each summer the debate team gets a topic that will be explored throughout the year. This year’s debate topic was the Middle East.

In order to address the topic, the team holds several meetings during the summer.

Harris said this success will help him recruit new debaters to the team.

“We were a deep squad this year, we’ll be a talented squad next year, but how talented will depend on how many students come back,” Harris said.

This year’s squad is made entirely of students from Kansas. Harris said that should be a reflection of how strong the Kansas high school debate program is.

“Success sells itself,” he said.