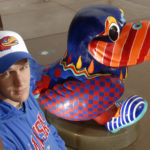 Kansas University senior Rick Phillips is making it his mission to get his photograph taken with as many Jayhawk statues from the Jayhawks on Parade as possible. Phillips is photographed by Mardis Gras on the Kaw Hawk by Janet Perkins, in front of the Lied Center on KU's West Campus.

In a symbolic farewell to his college years, Rick Phillips has embarked on a mission. He is tracking down every Jayhawk he can find.

“It reminds me of my time at school,” the Kansas University senior said.

Phillips is not after just any Jayhawk. He is searching for the flashy stars of the Jayhawks on Parade.

The statues first appeared in April 2003 as part of a fundraiser led by KU and Lawrence Convention and Visitors Bureau. In all, 30 birds found roosts throughout town. At the end of the exhibition, many were donated to charitable organizations to be auctioned off.

Some statues still stand in Lawrence where they continue to delight onlookers. But, like searching for old high school friends, Phillips has found that some birds have taken unpredictable paths since they flew the coop.

“Some of them are really hard to find,” he said. “They’re in obscure places.”

To Phillips and his mother, Patty Phillips, the quest offers an opportunity for a final tour of the city he has called home the last four years. Their search has taken them to roads, sidewalks and buildings that hold memories of Phillips’ college years.

When he first came to Lawrence, he was a teenager, unsure of how to handle his newfound freedom.

“It took a while to get into the swing of things – balancing the studying and the social scene,” he recalled of his first two years here. “Once you get that done, it goes pretty smoothly after that.”

During his junior year, Phillips finally picked a major and realized the end was in sight. He plans to enter the Navy when he graduates in May.

On a recent visit from Oklahoma, Patty Phillips and her son began their adventure. They got a complete list of the statues on the Internet. Then they traveled around town, catching up with each bird, one by one. At each site, they stopped for photographs.

“They’re just great,” Patty Phillips said. “To me, they’re just a fun way of thinking of the Jayhawk.”

They aren’t the first to set out on such a mission. A few years ago, KU student Rodrigo Duque engaged in a similar pursuit. He ultimately tracked down 27 of the 30 birds. In the process, he visited neighborhoods he’d never been to before and met Lawrencians who helped in the search.

“The people were very nice,” said Duque, who now is a KU senior. “Most of them were very cooperative.”

Some birds are believed to have left the state, but many remain in high-profile spots.

Another Jayhawk at Jayhawk Bookstore, the mosaic Bit O’Hawk, was damaged by vandals and is now in storage. The Kansan, a sunflower-bedecked bird, that lived at the Legends Place Apartments, 4101 W. 24th Place, was abducted in August. Police later reported that the bird met a terrible fate.

“I heard it was blown up,” complex manager Susan Rinke said. “I’m so upset. There’s a concrete pedestal out there that is empty.”

Gogh Hawks Gogh, a bird who took a page from Vincent Van Gogh, was at KLWN before it had to be retired.

“It went missing, and it came back vandalized,” said Jon Thomas, program director at Lazer 105.9. “It was pretty torn up.”

Classic Jayhawk, a standard bird that stands in front of the Kansas Union, has also had its ups and downs. The bird now on display is a replica of the original, which became structurally weak following an attack by vandals.

The popular twin bird still needs regular paint touchups, said Wayne Pearse, engineer for the Kansas Union. But he said vandals aren’t the problem. The bird is loved by children who often climb on it.

“That’s a thing of pride for us,” Pearse said. “It’s worth a coat of paint a couple times a year.”

Phillips doesn’t know if he’ll find every Jayhawk, but he and his mother will try to see as many as they can.

It’s a quest that can have no end.

“I still have the hope of one day finding the remaining three,” Duque said.

Where are they now?

¢ Lions and Tigers and Hawks, Oh My! – in front of the Hilltop Child Development Center, 1605 Irving Hill Road.

¢ Mardi Gras on the Kaw Hawk – at the Lied Center of Kansas, 1600 Stewart Drive.

¢ So Many Faces, But One Heart that Bleeds Crimson and Blue – in lobby of KU Visitor Center, southeastern corner of 15th and Iowa streets.

¢ Merhawk on the Kaw – Outside Jayhawk Bookstore, 1420 Crescent Road.

¢ Bit o’ Hawk – Owned by Jayhawk Bookstore, in storage because of a broken leg.

¢ Classic Jayhawk – A replica of original roosts in front of the Kansas Union, 1301 Jayhawk Blvd. The original, which was damaged and repaired, is inside the Union.

¢ Gogh Hawks Gogh – most recently at KLWN, 3125 W. Sixth St., but is no longer in public after being vandalized.

¢ Uncle Sam Hawk – at Lawrence Service Center on I-70.

¢ The Kansan – most recently at Legends Place Apartments, on 24th Street, but reportedly destroyed by vandals.

¢ Chip Off the Old Hawk – believed to be in private ownership in Lawrence.

¢ Jayhawk as a Cow on Parade – last known to be in private ownership.

¢ Primary Hawk – last known to be in private ownership in Lawrence.

¢ We Are All Stars – at Lawrence Visitor Information Center, 402 N. Second St.

¢ Hawk of the Arts – last known to be in private ownership.

¢ Holy Hawk – last known to have gone to a business somewhere in Kansas.

¢ Puttin’ on the Glitz – may have gone to California.

¢ Marvelous Mosaic – last known to be with private owner in Colorado.