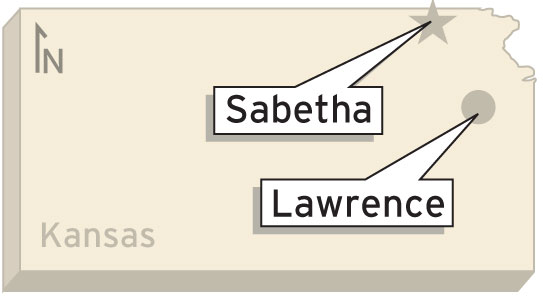 SABETHA ? Most communities need mountains, a nearby ocean or college to attract retirees.

Nemaha County has none of the above, but is doing just that.

It is the only Kansas county considered a retirement destination by the U.S. Department of Agriculture. To be considered such a destination, a community’s population of those age 60 and older must have grown by at least 15 percent between 1990 and 2000 as a result of people moving into the area.

“It is a very interesting situation,” said Laszlo Kulcsar, a demographer and director of the Kansas Population Center at Kansas State University. “It’s like a fascinating social phenomenon.”

Nemaha County is in northeast Kansas and has about 10,700 residents. Its biggest towns are Sabetha and Seneca; each has about 2,500 residents. The closest cities are Topeka and St. Joseph, Mo., which are about 60 miles away.

Kulcsar said he believes the Apostolic Christian Retirement Village in Sabetha has been key to the county’s retirement designation. The village has grown from a 26-bed nursing home in 1961 to a continuum care area with 210 residents.

“They seem to be attracting people who left Kansas back to Kansas,” he said.

Consider Betty Jane Kusler, 82, who grew up in Wamego and raised her children in Kansas City, Kan. She moved to Colorado in 1982. Kusler, who was stricken by polio at age 26, said she looked at nursing homes in Colorado before moving to Apostolic Christian Retirement Village, which is 13 miles away from one of her seven children who lives in Bern.

“Mountains are beautiful, but nothing takes the place of farmland. The hills just roll,” she said. Kusler also enjoys the peace and quiet of a small farm community. She said there are too many people and cars in Colorado.

In Sabetha, she can guide her electric wheelchair on nearby streets to a spot under a tree on a hill. It’s one of her favorite places.

“I watched the formation of a storm and I thought, ‘Oh, how beautiful,'” she said.

The natural beauty isn’t the only thing that enticed Kusler to move there in January 2005; she said it was the health care and friendly atmosphere.

“It’s just like they have known you forever,” she said of the staff. “It’s not just the physical care, but the mental as well. Laughter and happiness can do wonders.”

While many rural communities are struggling to get one doctor, Sabetha has five doctors, four dentists, several chiropractors and a dialysis center. The Sabetha Community Hospital completed a new 27,000-square-foot, $5 million addition about five years ago.

“For a small town, it is pretty strong in health care,” said Ed Strahm, administrator at the Apostolic Christian Retirement Village. “People can get the medical help they need here.”

Dr. Chris Tramp recently began practicing in Sabetha after receiving his doctorate at Kansas University. He returned to the area where he grew up because of the town’s cleanliness, schools and health care.

“They just have a really good medical system here, and it’s attractive to doctors to be here, honestly, because the medical system is so established,” Tramp said.

He also said the town is safe.

“We are well behaved,” he said, laughing.

Apostolic Christian Retirement Village, which is open to all religions, is like a community within Sabetha. It has 97 apartments, 12 assisted living apartments and a 94-bed nursing home on 22 acres. There are several dining rooms, libraries and activity rooms. There is a fitness center, two banks, a therapy room and small store. The buildings are connected with handicap-accessible hallways. Outside, there are walking paths and a pond.

“We’re like a family,” said Virginia Howerton, who was working on one of numerous puzzles in an activity room with another resident. They had participated in a group morning exercise and planned to join others for lunch.

Howerton, formerly of nearby Morrill, said she planned to live there until she “kicked the bucket” whether it be in the apartment she bought six years ago or in the nursing home.

Not only does the retirement village offer continuum care, but convenience for others such as Ramona Breeden, 78, who has a daughter with multiple sclerosis. In 1994, Breeden and her late husband bought two apartments and had an adjoining door built so their daughter could live in one. Their daughter now lives in the nursing home area which can be accessed without going outdoors. Breeden’s twin sister Leona Lukert now owns the other apartment.

“My sister has 11 grandchildren and they just go tearing through her apartment and into mine,” Breeden said. “We love it.”

The sisters grew up in Sabetha, but Breeden moved back after living in Nebraska.

Joan Whittenburg, 84, said she worked in at least seven nursing homes in Topeka before moving into the nursing home in the Apostolic Christian Retirement Village.

“It’s clean and we have a lot of fun here,” she said of singing, playing dominoes and taking out-of-town bus trips to places such as Wamego, Topeka and Omaha.

Despite few eating places and no movie theater, Sabetha Mayor Dave Emert said the town offers plenty of activities such as concerts, swimming, a nine-hole golf course and sporting events. He said his father, who has lived in the retirement village for three years, often has to turn down invitations.

“There’s just too much going on,” he said.

Emert and Strahm said the key to Sabetha’s survival has been its manufacturing industry, which has drawn former employees and employees’ relatives to retire in Sabetha. The retirees help fuel the health care system.

“Along with retirement, comes the Medicare income that keeps our hospital going,” Emert said. “Sabetha is a unique community in the fact that we have about 2,500 jobs in a town of about 2,400 people. We support a lot of the smaller communities around us.”

K-State’s Kulcsar has received two grants to research the socioeconomic structure and population trends of Nemaha County. They are looking at the relationship between the retirement community and businesses.

“Retirement migration can be an engine of sustained economic growth,” Kulcsar said. “If it is something that can help these small communities survive, then maybe we can come up with a model that could be useful for other small communities.”