Talk of rebuilding begins amid rescue 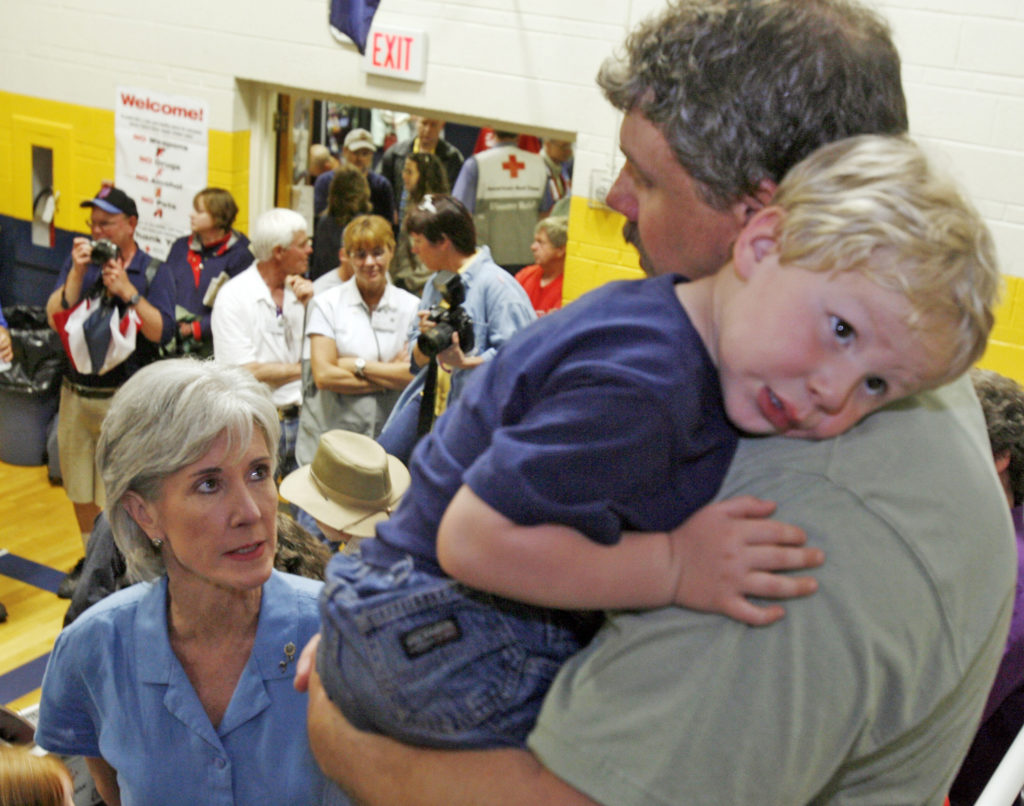 Kansas Gov. Kathleen Sebelius, left, talks to Jason West and his 2-year-old son, Bo, about when residents will be allowed back in to see their homes in Greensburg. A tornado destroyed about 95 percent of the town Friday night. Sebelius took a tour Sunday of downtown Greensburg and the emergency shelter in the Haviland High School gym. 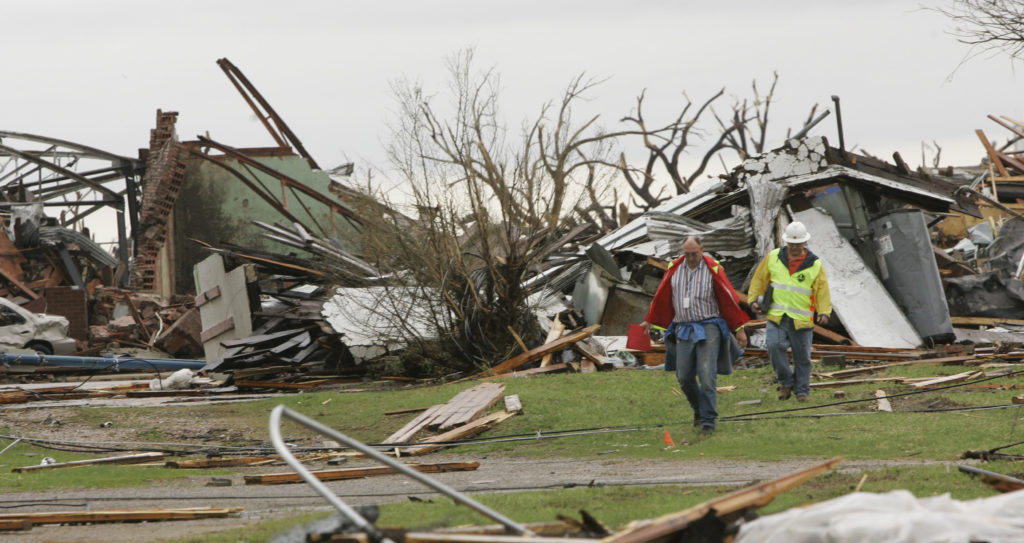 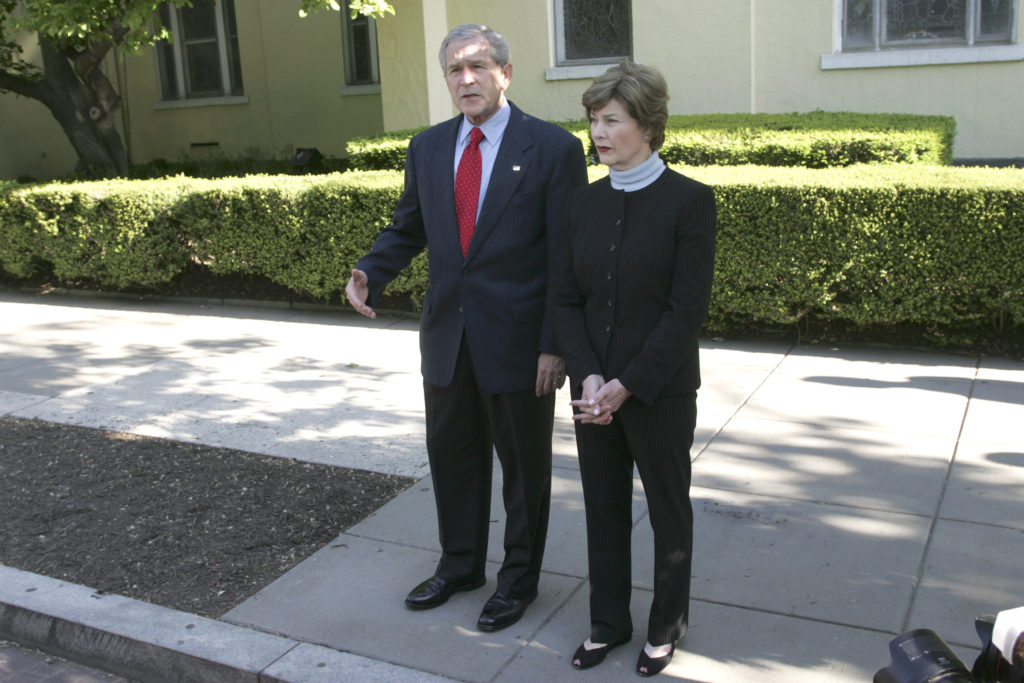 Greensburg ? Rescue workers dug through piles of rubble Sunday searching for anyone who might have been trapped by a tornado that obliterated this south-central Kansas town, while officials began talking about rebuilding.

At least 10 people were known dead from weekend storms. Eight of them were in the Greensburg area and two others died elsewhere in Kansas – one during the Friday night storms that hammered Greensburg and one in a second round of storms late Saturday, state officials said.

Rescue workers on Sunday used trained dogs to sniff for bodies and used their hands and heavy equipment to clear away the rubble. No one else had been found by early afternoon, and officials were hopeful the death toll wouldn’t rise.

Maj. Gen. Tod Bunting, the state’s adjutant general, said officials did not know if anyone was missing.

“A lot of people have gone to other places and it’s difficult to track them down,” he said.

National Guard engineers were helping with the search, which was expected to wind down by the evening.

“Some of the rubble is just so deep,” Bunting said. “That’s really what our problem is.”

During a tour of the town early Sunday evening, Gov. Kathleen Sebelius – who in December asked the Pentagon to replenish Kansas equipment left by the National Guard in Iraq – said the devastation in Greensburg shows why the state needs its equipment back.

Greensburg remained off limits to residents Sunday, but officials said they would be allowed to return this morning to recover what they could. Residents were to be bused in and had to be out of town by 6 p.m. CDT.

Dick Hainje, regional administrator for the Federal Emergency Management Agency, said the agency was bringing in travel trailers for some of the town’s residents – trailers that had been ordered for people displaced by Hurricane Katrina. But it wasn’t clear when people would be able to move into the trailers; debris was in the way and the town had no clean water.

While some residents wondered about the town’s future, Hainje was optimistic.

“The town will be back. I have no doubt of that,” he said.

“It’s going to take a long time for the community to recover,” Bush said Sunday, referring to Greensburg, after attending a morning service at a church in Washington. “And so we’ll help in any way we can.

“There’s a certain spirit in the Midwest of our country, a pioneer spirit that still exists, and I’m confident this community will be rebuilt,” Bush said.

The storms in Kansas were part of a weekend of violent weather, with tornadoes also dashing across other parts of the Plains states late Saturday. And on Sunday, the National Weather Service posted several new tornado warnings for south-central Kansas.

Early Sunday, an empty Union Pacific coal train derailed at Fort Riley after a trestle bridge that apparently had been weakened by high water collapsed. The engineer and conductor were taken to a hospital for observation, fort officials said.

The National Weather Service classified the tornado as an F-5, the most powerful possible. The weather service said it cut a 22-mile track, 1.7 miles wide, and had winds estimated at 205 miles per hour. The last tornado of that strength was in Oklahoma City on May 3, 1999, and killed 36 people.

Greensburg Administrator Steve Hewitt, who lost his home, estimated 95 percent of the town of 1,500 was destroyed.

“I see a community coming together. I see a future here. I really do,” Hewitt said.

State Rep. Dennis McKinney, the House minority leader and a Greensburg resident, said he hoped to rebuild his home in the same place.

But other residents were unsure about the town’s future.

Darin Headrick, superintendent of Greensburg’s public schools, said classes will be canceled for the rest of the academic year, with graduation being held elsewhere. When school resumes in August, the district, which has about 300 students, will hold classes in other communities. “Our teachers will have jobs; our kids will have classrooms to attend,” he said.

Among the few structures that survived was the Bar H Tavern, which was briefly converted into a morgue. Command operations for rescue efforts were moved into the town’s courthouse, which was damaged but still standing. The massive concrete silos of a grain elevator still towered over what is left of the town.

All the churches were destroyed. Every business on Main Street was demolished. The town’s fire engines were crushed and other crumpled vehicles were thrown around. Tree trunks stood bare, stripped of most of their branches.

The town’s claim to fame – the world’s biggest hand dug well – was buried under a mountain of debris. The gift store at the well had disappeared.

For decades, meteorite hunters from throughout the world have been drawn here to hunt for meteorites. The town’s extensive meteorite collection, including one weighing 1,000 pounds, was one of the casualties of the storm.

Scores of injured people were sent to hospitals.

The twister was part of a storm front that spawned tornadoes in parts of Illinois, Oklahoma, South Dakota and Nebraska, though damage was minimal, officials said.

The tornadoes that came with the second round of storms late Saturday caused scattered damage to farm outbuildings and homes and downed power lines. South Dakota had at least 20 twisters, with no injuries, the weather service said.

Tornadoes late Saturday in western Oklahoma destroyed at least eight homes and injured one person, according to the state Department of Emergency Management.

“To have this many significant tornadoes is tremendously unusual,” said Larry Ruthi, meteorologist in Dodge City.

American Red CrossCall: 800-REDCROSSVisit:www.redcross.orgMail:American Red CrossP.O. Box 96456Washington, DC 20090-6456Donations can be earmarked specifically for the Greensburg disaster, but donors must specify that at the time of their donations.