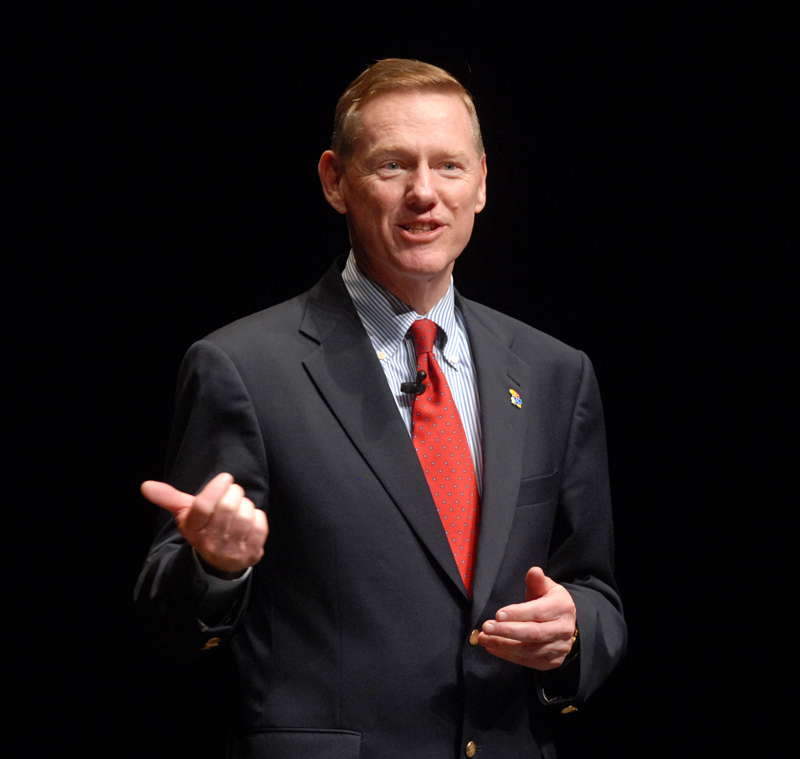 The alternative fuel of the future could be ethanol or maybe even hydrogen, but Alan Mulally doesn’t pretend to have a crystal ball.

“This is exciting,” said Mulally, Ford Motor Co. president and CEO, listing a myriad of directions people may turn to fuel automobiles in the future. “Somewhere in here is a solution that we’re all going to figure out, because we need to figure it out.”

The Lawrence native and Kansas University graduate chosen to revive the struggling auto giant returned to his hometown Monday to deliver the Anderson Chandler Lecture at the Lied Center.

Mulally spent nearly four decades at Boeing Co. before becoming president and CEO of Ford in September. The Dearborn, Mich.-based company posted a record net loss of $12.7 billion for 2006.

“When we come out of this thing, we’re going to be a turbo machine,” Mulally told the nearly-packed house at the Lied Center.

Mulally, who often referred to his mother, Lauraine Mulally, in the audience, chatted about his early years growing up in Lawrence, working at local businesses, and his young ambitions to be an astronaut.

His plans were derailed because of slight color blindness. Instead, Mulally took the path that led to a long career at Boeing, including such roles as vice president of engineering, senior vice president of airplane development and president of information, space and defense systems. He was CEO of Boeing Commercial Airplanes from 2001 until moving to Ford.

Mulally offered tips for successful cooperation in the workplace. Put people first, he said, and include everyone; create a compelling vision, listen and have emotional resilience.

“I think he’s a great guy to follow,” said Ben Miller, a KU business student who listened to Mulally’s talk. “He’s very successful. Maybe I could be as successful as him one day.”

Mulally’s test at Ford, which is restructuring and pressing on with investment in fuel-efficient cars and a full family of products and services, is to make the company viable, he said.

“The reason I came to Ford was to create a long-term viable Ford Motor Company for the all the reasons that go with that – its contribution to society; its creation of fabulous, high-tech, important jobs; United States competitiveness in manufacturing, engineering, design and science,” he said. “I think that progress on that is how Ford and I will be judged.”