Mulally donates van to Senior Center in honor of mother

Ford CEO to be grand marshal of today's parade 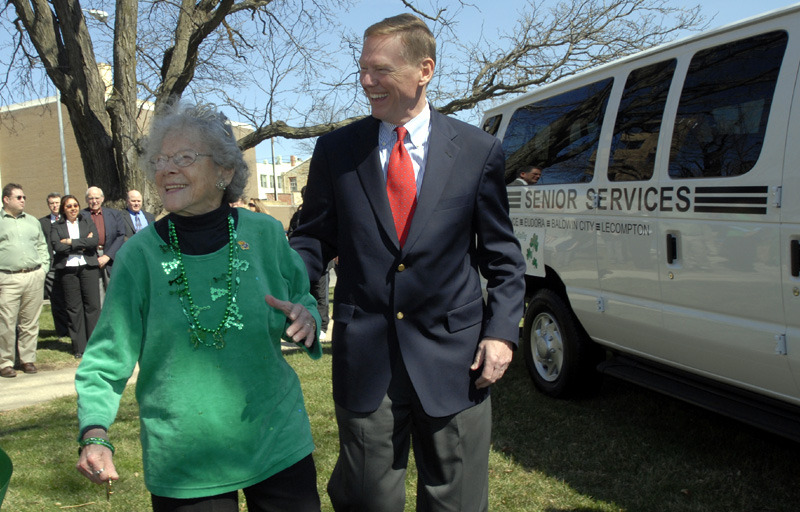 The CEO of Ford Motor Co. came back to his Lawrence roots on Friday and donated a 15-passenger van to a senior services center in honor of his 87-year-old mother.

Amid handshakes and hugs from old friends, Lawrence native Alan Mulally presented Douglas County Senior Services Inc. with the keys to a new $30,500 van nicknamed “the Mulally Trolley.” Mulally’s mother, Lauraine Mulally, clutched her son’s hand throughout much of the donation ceremony on the lawn of the Senior Center, 745 Vt.

“She’s the most fabulous mom in the world,” Mulally said. “She loves the Senior Center and she loves all of her friends here.”

Mulally, who became Ford’s president and chief executive officer in September after a long career at Boeing Co., is back in town to serve as grand marshal of today’s St. Patrick’s Day Parade. His mother on Friday wore green St. Patrick’s Day beads, green bracelets, a green blouse and a tiara.

Mulally said he’s been back to town a few times since taking the Ford job, but not in such a visible way.

“It’s been a godsend to have grown up in Lawrence, Kansas,” he told a crowd of about 75 people at the Senior Center. “I’ll always treasure it.”

“I look at him as someone who puts his pants on one leg at a time like anyone else,” Murfin said. “He’s a very positive influence.”

Mulally acknowledged that Ford faces challenges as the bigger vehicles that have been the company’s hallmark fall out of fashion, but he took the opportunity to talk up the company’s line of smaller models such as the Focus.

Mulally said he’ll be in town until after today’s parade. He plans to have breakfast with friends and family, spend time talking with his mother and make a trip to Laird Noller Automotive to pay for the van with a personal check.

The idea of donating the van came about when Mulally was devising a birthday gift for his mother that would help make up for missing some special occasions.

Lois Mead, interim executive director of Douglas County Senior Services, said the van will be used for taking members to doctor’s visits and special events. It’s already booked for an April 11 trip to a dinner theater in Overland Park.