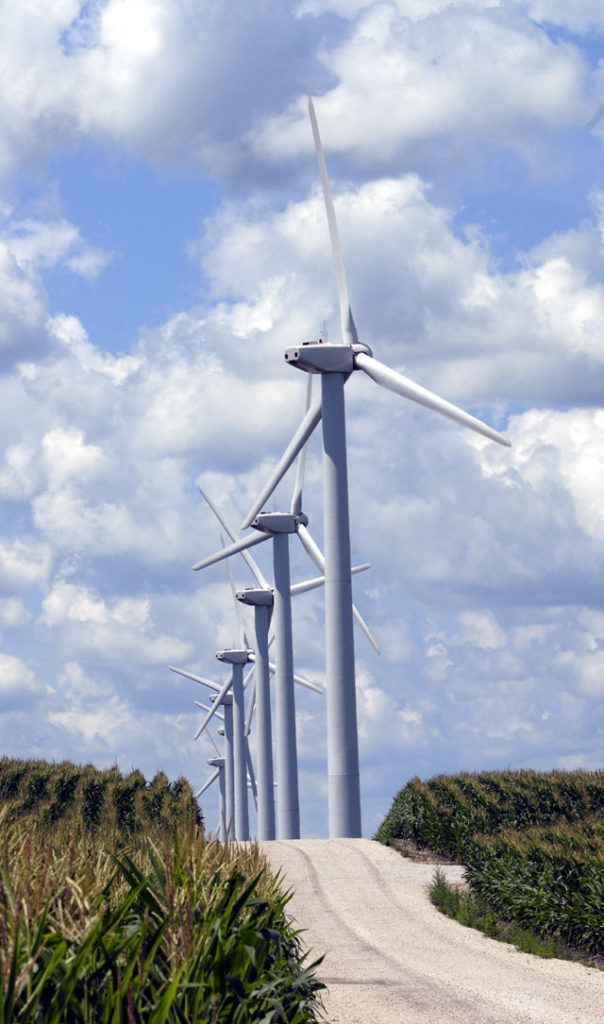 A wind-collecting unit, above, stands more than 60 feet tall outside Blairsburg, Iowa, where one of the largest wind power experiments in the U.S. dots the landscape.

Iowa Gov. Tom Vilsack challenged regulators and utility companies in his state a few years ago to produce 1,000 megawatts of renewable energy by 2010.

The push, known as a renewable portfolio standard and other incentives, has helped develop Iowa into a national wind energy leader.

With 135 giant wind turbines towering in the rural landscape of Wright and Hamilton counties and several other wind farms in north-central Iowa, the state has become the nation’s third-leading wind-energy producer behind Texas and California.

Iowa produces 836 megawatts of wind energy compared to the 364 megawatts Kansas produces, even though researchers have labeled Kansas as a state with more potential to produce wind energy.

“We’re still a long ways from reaching our friends of Iowa and Minnesota. They don’t have near the wind quality, but they still make it work,” said Jim Ploger of the Kansas Energy Office at the Kansas Corporation Commission.

MidAmerican Energy owns the Century Wind Farm and several others in Iowa that can power on average about 100,000 homes with the intermittent energy source.

Ploger said it’s currently an economics issue for the Kansas utilities with the relatively cheap price of coal from Wyoming, which Westar Energy uses to generate most energy for Lawrence customers. 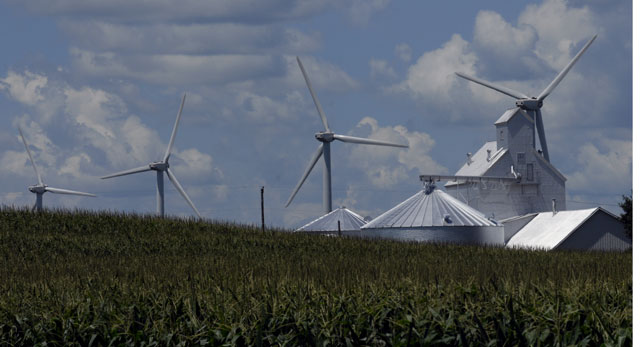 Another view of the farm. Iowa produces 836 megawatts of wind energy compared to the 364 megawatts Kansas produces, even though researchers have labeled Kansas as a state with more potential to produce wind energy.

But the interest is apparent, with 18 current wind energy proposals in Kansas.

“They’ve been working and studying. If they could just find buyers, they’d probably be moving dirt tomorrow,” Ploger said.

Construction was recently completed on the state’s third major wind farm, the Spearville Wind Energy Facility, east of Dodge City, and Kansas City Power and Light hopes to have the 100.5-megawatt facility working in the next couple of weeks.

Westar operates a small 1.2-megawatt wind-energy station at the coal-fired Jeffrey Energy Center north of Topeka. One megawatt can power about 300 homes for one day.

Some in the wind energy development business say Gov. Kathleen Sebelius’ public opposition more than a year ago to wind farms in the Flint Hills region has hurt development. 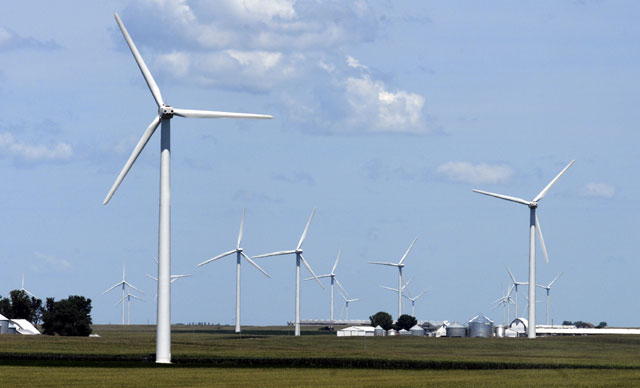 One of the largest wind power installations in the United States is north of Ames, Iowa, off Interstate 80 in Blairsburg, Iowa. Iowa has become the nation's third-leading wind-energy producer, behind Texas and California. Energy officials in Kansas think the state has potential to produce more wind energy than Iowa.

Sebelius created a task force that labeled an area “Heart of the Flint Hills.” It requires local approval for wind development there.

“The opposition in the Flint Hills has been the biggest obstacle to get this project developed, to find an interested utility and to get any policy advanced in the state,” she said.

Sebelius has called for utilities to install 1,000 megawatts of renewable energy by 2015. New recommendations from the Kansas Energy Council will attempt to provide more incentives for renewable energy development, Ploger said.

But the recommendations contain no renewable portfolio standard.

Ploger says the Flint Hills issue has calmed down because developers still see potential in western Kansas and other areas, even though it can be difficult to transmit electricity from there back to more heavily populated areas of the state. 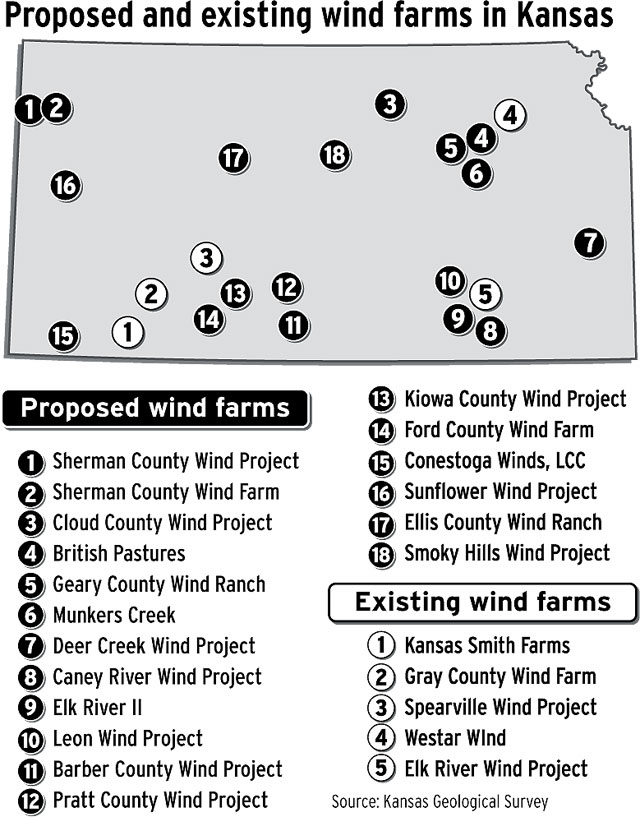 “The largest cost is building (wind farms). Once they are built, it’s very, very nominal cost to maintain them. The source of the fuel is free,” he said.

“Kansas really needs some more incentives to keep us competitive with the surrounding states,” she said.