Buried in the 670 pages of the federal No Child Left Behind law was a requirement that high schools provide lists of students’ names, telephone numbers and addresses to military recruiters.

Students can get off the list if they or their parents notify the school district in writing that they want to opt out.

But there’s a catch. Those who opt off the list find themselves also excluded from the lists provided to college and job recruiters. And opting out also means a student’s name cannot be published in yearbooks, honor rolls or newspapers.

Now, two Lawrence High School students are out to change that policy. They want students to be able to opt off the military’s list without being excluded from the other benefits of student life.

“It’s ‘all or nothing,’ and we don’t think that’s right,” said senior Lexie Welch, who, with junior Sarah Ybarra, is working to change the policy.

The pair first got interested in the issue when they decided to make a short film about military recruiting at high schools.

They said they had no idea that effort would end up with them working on a comprehensive documentary while attempting to get the school district’s privacy policy changed. 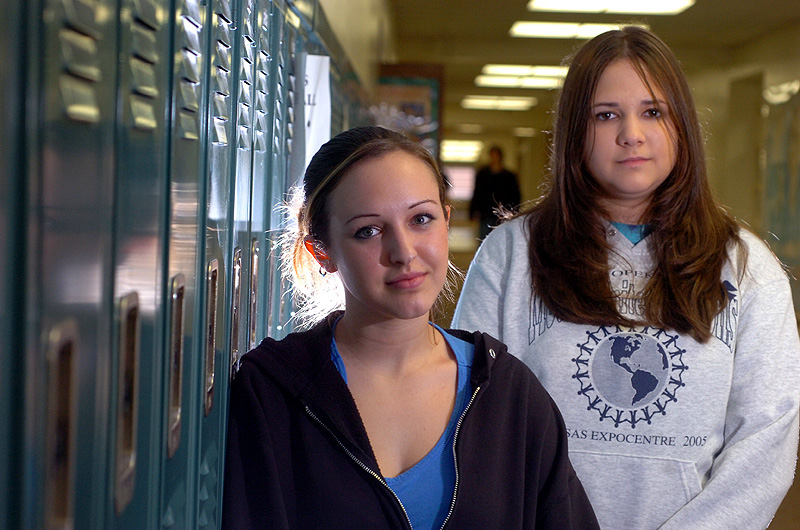 Lawrence High School students Lexie Welch, left, a senior, and Sarah Ybarra, a junior, have raised concerns about the school district policy concerning sending students' names to military recruiters, as required by the No Child Left Behind law. Welch and Ybarra, pictured Thursday at the school, are producing a documentary about the subject.

“It was really supposed to be only five minutes long, but we kept finding out things,” Ybarra said of the pair’s initial film idea.

The young women have ended up exploring the intricate details and ramifications of federal law, including the Family Educational Rights and Privacy Act, or FERPA.

The students have concluded that there should be a third option when it comes to filling out FERPA forms. Parents should be able to allow their children to be in the student publications and on honor roll lists while other information about them is kept from the public.

It may take action by the school board for that to happen, however, and the girls plan on making an appearance before the board and pleading their case.

Board member Leonard Ortiz said he welcomes a chance to hear from Welch and Ybarra. He noted, however, that the military recruiting information is tied to certain funding provided under the No Child Left Behind law.

“I’m not sure what we can do about it, but it would be worth looking at to see if there are ways they can continue to have their pictures in yearbooks and so forth,” Ortiz said. 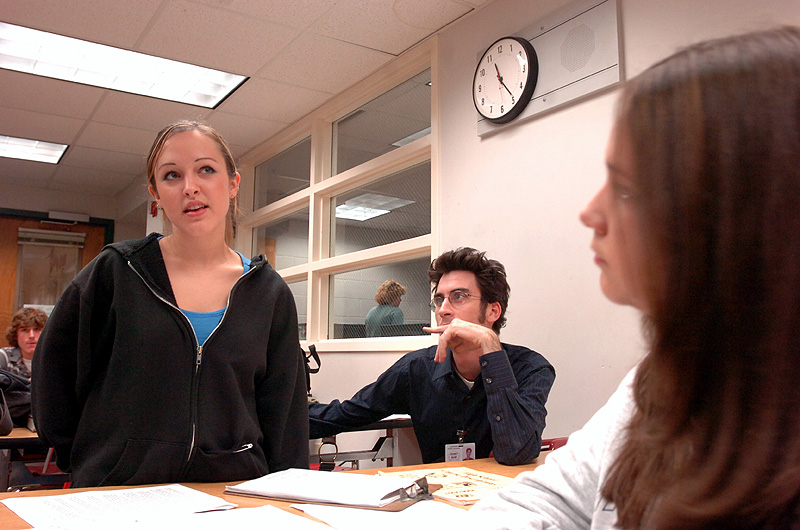 Lawrence High School senior Lexie Welch, left, and LHS junior Sarah Ybarra, right, have raised concerns about military recruiters in their high school and the accompanying school district policy. Welch and Ybarra, who are producing a documentary about the subject, are shown Thursday at the school with teacher Jeff Kuhr.

There are many aspects to FERPA, which became law in 1974 and has been amended several times, most recently in the late 1990s.

Welch’s and Ybarra’s quest to understand it led them to interview a congressman, an Army recruiter, their principal and other students and parents. They also said they expect to interview Supt. Randy Weseman before talking to the school board.

The idea for their project started when Welch received a letter in August from someone claiming to be an Army recruiter.

“Where did they get my information?” she recalled wondering.

The students launched their investigation in an advanced broadcasting class taught by Jeff Kuhr. Welch and Ybarra estimate they so far have about two hours of video to work with as they craft their documentary.

They also did a survey of parents about FERPA and found that 65 percent of those surveyed did not know of FERPA’s ramifications. They interviewed Principal Steve Nilhas about the role of ROTC in school and the wearing of uniforms. They also caught up with U.S. Rep. Dennis Moore, D-Kan., and asked for a comment about campus military recruiting.

But the biggest challenge, they said, was getting an interview with Army recruiters. They tried to talk to recruiters who manned a table in the high school commons area earlier this semester.

“They didn’t want anything to do with being interviewed,” Welch said.

A sergeant later agreed to an interview but wanted questions submitted in advance.

“We gave them the questions and he talked to us,” Ybarra said.

They told the sergeant they were interested in possibly enlisting some day.

Welch and Ybarra have put together an introduction for their documentary but said they probably will be working on the project until the end of the semester.

Kuhr said he is impressed with his students’ work and has lifted time restraints on them.