When it comes to humor and the presidency, Gerald Ford wrote the book.

“Humor and the Presidency” was the title of the 38th president’s 1987 collection of thoughts and anecdotes on the subject. It is no longer in print.

Ford’s legacy regarding humor and the presidency, however, is indelible.

Other presidents had been widely lampooned before Ford; Vaughn Meader enjoyed a high-profile career impersonating John F. Kennedy until the president’s 1963 assassination, and Ford’s immediate predecessor, Richard Nixon, was a favorite caricature target.

Ford, meanwhile, had long ago laughed off Lyndon Johnson’s charge that he couldn’t walk and chew gum at the same time. But when Chevy Chase pretended to be Ford during the first year of “Saturday Night Live” (1975-76), he created an impression that the commander in chief never could shake.

Chase didn’t wear a bald cap or try to copy the president’s speech patterns. He just fell down a lot, spectacularly, after news footage had depicted Ford stumbling on several occasions.

In Ford’s memoir, “A Time to Heal: The Autobiography of Gerald R. Ford,” he bitterly recounted how a brief stumble recorded by a television camera turned into a national story.

“There was no doubt in my mind that I was the most athletic president to occupy the White House in years … (but) from that moment on, every time I stumbled or bumped my head or fell in the snow, reporters zeroed in on that to the exclusion of almost everything else. … (This) helped create the public perception of me as a stumbler. And that wasn’t funny.”

John Robert Greene, a Ford biographer and professor of history and government at Cazenovia (N.Y.) College in Cazenovia, said Ford got the erroneous image because he was the first president whose every public move was scrutinized by a post-Watergate press. 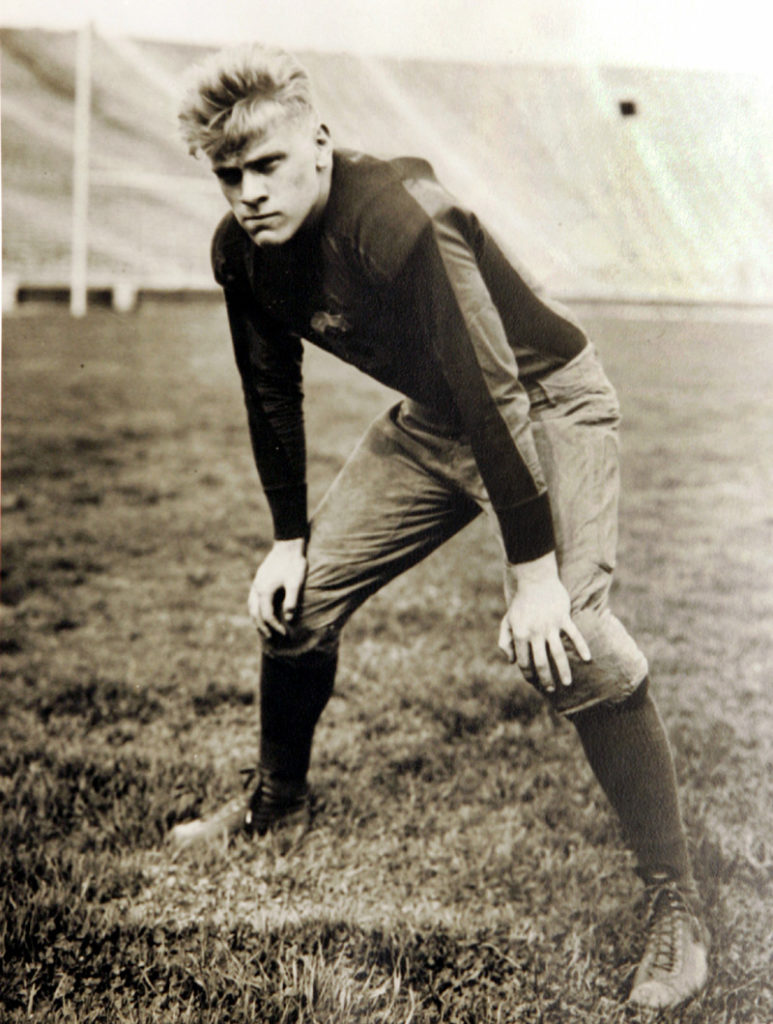 A photo provided by the Gerald R. Ford Library shows Ford as a football player at the University of Michigan. Despite being one of the most athletic inhabitants of the White House, Ford never lived down a stumbling incident - once Saturday

Never mind that Ford had been an all-star center with the University of Michigan Wolverines, collecting the football team’s most valuable player award. Chase’s act, week after week, cemented one public perception of Ford.

Chase’s Ford routines were arguably the centerpiece of a “Saturday Night Live” that was seen as groundbreaking and dangerous when it debuted.

“It was sort of audacious because no one had done the pratfalls, the president as a stumblebum, and Chevy’s stuff was incredibly good, and he committed to those falls,” said Tim Kazurinsky, a cast member in the 1980s. “Because ‘Saturday Night Live’ was new and innovative, it did signal that there’s going to be nothing sacred to this show.”

“I think it did open a door that you could poke fun at presidents on national TV and get away with it,” said Jeff Cohen, a progressive political consultant and author of “Cable News Confidential: My Misadventures in Corporate Media.” “Johnny Carson used to do it in his monologue, but he was pretty much aiming at all politicians, and it wasn’t so sledgehammery.”

Cut to the Chase

Chase said Wednesday in a Reuters interview that he came to know Ford as “a very, very sweet man” and “a terrific guy.” Still, Chase had intended his impersonation to draw blood.

“He had never been elected, period, so I never felt that he deserved to be there to begin with,” said the 63-year-old actor, who basically made the transition from writer to performer through the Ford sketches. “That was just the way I felt then as a young man and as a writer and a liberal.”

The lasting power of Chase’s impersonation was apparent in how often it was cited in obituaries for the former president.

Fine noted that in contrast to the more recent comedic attacks on Presidents George W. Bush and Bill Clinton, Chase’s act “was not a mean-spirited kind of critique: Our president is a bit of a bumbler, but he’s a nice bumbler, and that’s a good thing compared to Richard Nixon.”

Ford demonstrated that he was a good sport by appearing on tape on “Saturday Night Live”; he delivered the introductory “Live from New York …” line.

Ford was even more game about the “Saturday Night Live” jokes in 1986 when he spoke at a symposium on humor and the presidency: “On occasion I winced. But on the other hand, Betty and I used to watch ‘Saturday Night Live’ and enjoyed it. Presidents are sitting ducks, and you might as well sit back and enjoy it.”