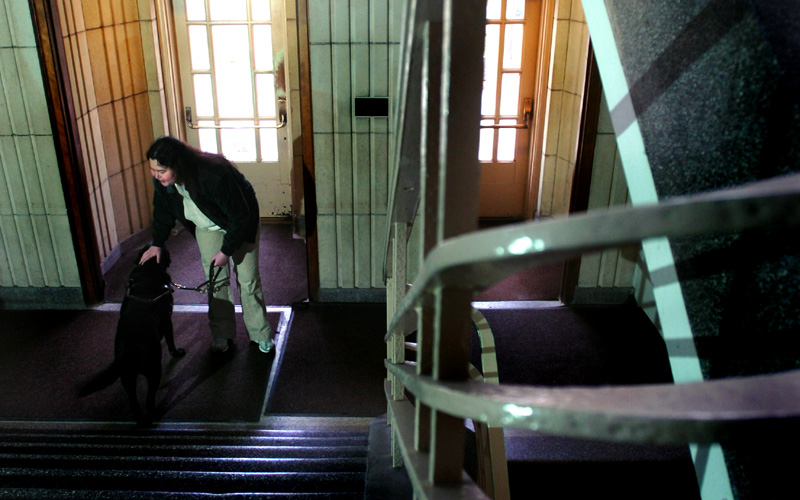 Rachel Magario, Kansas University graduate student, of Sao Paulo, Brazil, pets her guide dog, Hamlet, recently in the entryway of Lindley Hall. Magario has spent two and a half years exploring the university and is developing tactile maps to assist blind students such as herself in navigating the campus.

Rachel Magario once thought of Kansas University’s campus as a jungle.

Its lack of square blocks made it difficult for Magario, who is blind, to navigate.

“It was more like a challenge,” she said of learning the paths and buildings. “The campus was not going to win me. I was going to win and learn every piece.”

Now Magario, a graduate student, wants to take what she’s learned to help other blind students find their way. Magario is working with geography faculty and staff to create campus maps and diagrams for the blind.

The effort, which is just beginning, has received $5,000 in support from KU Endowment.

Magario came to KU in 1997 as an international student from Sao Paulo, Brazil. She was used to the square city blocks of her home city. But KU’s curving paths and hilly terrain posed a challenge.

A KU service at the time included two weeks of guided help. But two weeks weren’t enough. Magario called on friends to help show her around, and she set the goal of learning every nook and cranny.

Today she holds a mental catalog of things that many people pass by without noticing.

Wescoe Hall’s fourth floor has carpeting in the main corridor, for example. The back sidewalk from Watson Library to Blake Hall has a patch of gravel on the side.

These bits of information – along with scents and sounds – help Magario move freely.

Magario is working with KU’s Geography Department and Cartographic Services Office to create tactile maps, which use Braille and raised lines and symbols to indicate topographic features.

“The focus of Rachel’s project is trying to develop maps for the blind that are created by the blind,” Darin Grauberger, director of cartographic and GIS Services.

But creating materials that can be useful to the blind is a bit of a challenge.

The researchers are tapping Magario’s expertise. They’ve asked her to explain her mental map of the campus. That is, what she thinks the campus is.

And there are differences in what she notices and what the terrain really looks like. For example, the main strip from Chi Omega Fountain to Adams Alumni Center feels like a straight line to Magario, and not the curved drive that it actually is. 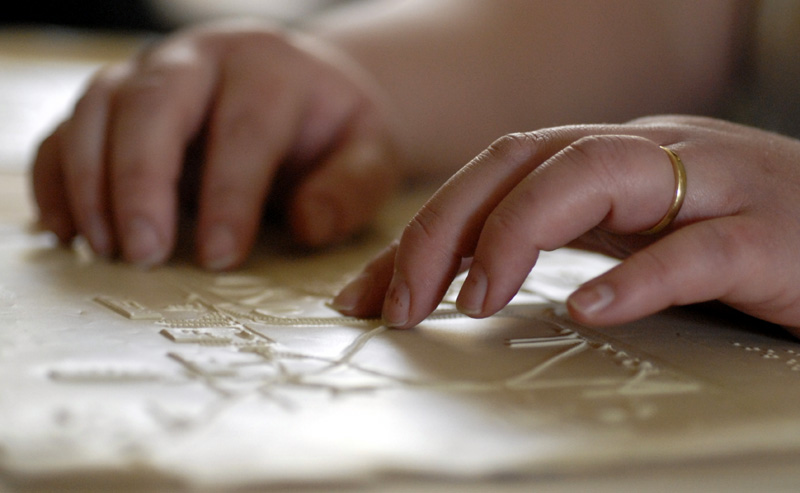 Magario runs her fingers over a tactile map recently in her Lawrence home.

And in another example, Magario doesn’t sense the angled turn from Jayhawk Boulevard south onto Naismith Drive. To her, that corner is straight and not a 90-degree angle.

Such discrepancies can be difficult to deal with when creating a document that is meant to help people get from one place to another.

If the map indicates a sharp turn, “it doesn’t help me if I’m actually in the field,” Magario said. “It confuses me.”

Those are issues that the researchers and Magario will have to work through.

The project, which will continue in the spring semester, is expected to take months before maps are produced that can be used by other blind people.

“If we could take Rachel’s experience and make it easy for new students, then they could do in a year what took her two or three years to learn,” said associate professor George McCleary.