Energy at the forefront

Topeka ? With a healthy state budget and three-year school funding plan in place, some say the Kansas Legislature should now turn its focus on energy.

“I see it as an important issue this year, and one that will stay on the front burner for several years,” said Joe Harkins, natural resources adviser to Gov. Kathleen Sebelius.

Politically, the timing may be right with energy concerns dominating everything from foreign policy to the cost of gasoline at the pump.

“Finally, we’re turning a corner in Kansas,” said Paul Johnson, a lobbyist for Kansas Catholic Conference, who has fought for programs to help people weatherize their homes.

When lawmakers start the 2007 legislative session in January, they will face a host of proposals, some of them put together by the Kansas Energy Council, which was re-energized earlier this year when Sebelius added legislators to the panel.

The council’s recommendations are expected to be finalized later this month and will cover conservation, production tax incentives and even basic energy education.

These are subjects lawmakers should face head-on, said state Rep. Tom Sloan, R-Lawrence, and a member of the council. 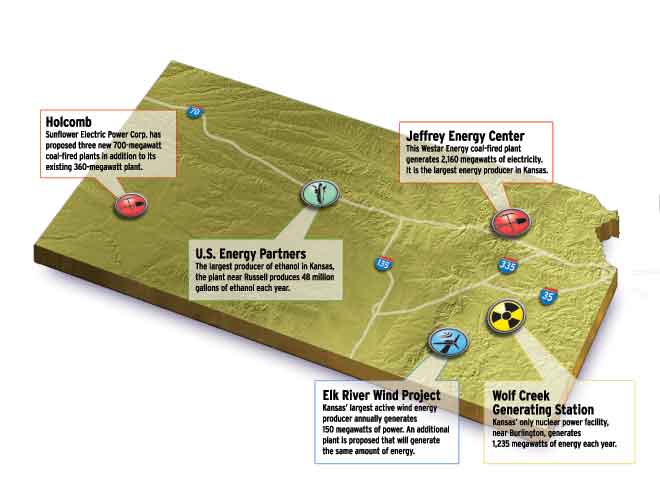 A major decision is awaited on the proposal by Hays-based Sunflower Electric Power Corp. to build three 700-megawatt coal-fired plants next to its 360-megawatt plant in Holcomb. If built, the combined plant would be one of the largest in the Midwest, but most of the power would be exported to Colorado.

Environmentalists oppose the project because it will add pollutants to the air, suck water from the aquifer and, they say, the continued dependence on coal will thwart efforts to increase electric capacity through renewable resources such as wind. Permits for the plant are being considered by the Kansas Department of Health and Environment.

Coal is burned to produce about one-half of the country’s electricity, but in Kansas, coal produces 71 percent of the state’s electricity, according to the Kansas Energy Report.

State leaders also are considering ways to make it easier for the development of so-called community wind projects, which are suited for smaller commercial operations financed by local investors who keep the electricity sales in the community.

But battles continue on the wind front, especially in the Flint Hills where the prevailing winds make it an attractive area for wind projects, but many oppose cluttering the scenic landscape.

“You’ve always got Nimby (not in my backyard), whether it’s a used car lot or wind turbines,” Sloan said. “Nobody wants change if they think it will adversely impact them. Many opponents of wind power support it for somewhere else.”

“At least a quarter of our energy, especially home-based, is wasted,” Johnson said.

Some have called for a statewide program to get utility companies to provide energy audits, which would give customers information on the costs and benefits of updating their major appliances.

Meanwhile, amid high oil prices, ethanol – a fuel made from corn or grain sorghum – continues to generate enthusiasm nationwide and Kansas. Eight plants are producing in the state and another eight are under construction or nearing construction.

Proponents say ethanol will help reduce dependence on imported oil, while opponents say it’s inefficient because it requires a lot of water to grow the crops needed to produce it.