For the better part of the past year, some young homeowners in East Lawrence held their tongues while neighborhood opposition to a planned development raged around them.

Now, a small but increasingly vocal group of 20-something residents have decided to take on what they feel are deep-seated views that change is bad and that making East Lawrence more urban won’t fly.

But some longtime East Lawrence residents and property owners view their younger neighbors as naÃive and predict the neighborhood’s relative newcomers will move on once the development increases both traffic and property taxes.

“No matter what, our property taxes over here have skyrocketed,” said Nicolette Proudfoot, a longtime resident of the neighborhood. “And they’re going to go up.” 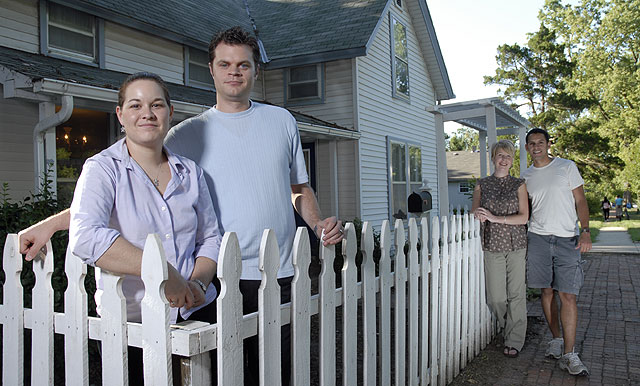 From left are Ashley Winters, her husband, Benjamin, Shannon Hodges and her husband, Isaias Izquierdo. These couples and other homeowners in East Lawrence have become more active in the neighborhood association and within the neighborhood, attending meetings and making their opinions known. But their interest in pro-growth development has met resistance from other residents.

Proudfoot helped organize the Old East Lawrence Preservation Alliance to lobby for changes to Harris’ development plan near Eighth and Pennsylvania streets. She said young people in the neighborhood don’t oppose property tax increases because they’ll be gone before they get too high to afford.

“A lot of people are of that mindset,” she said. “But that means they’re willing to move on when they get that high.”

Mark Kaplan, a member of the preservation alliance, said many of the younger homeowners – people who have moved to the area in the past few years – have a stake in the neighborhood only because of the Harris project.

But Benjamin Winters, 27, said that perception is just not true, and many young residents are here to stay. Winters lives a block from the proposed Harris residential and retail development.

“There does seem to be a fear by some that the young’uns don’t respect history, don’t respect the historical aspects of the neighborhood, and that we’re only interested in flipping the houses here to turn a profit,” Winters said. “It’s ludicrous. And it’s offensive.”

The conflict has come to a head in recent East Lawrence meetings. Hodges and others described them as screaming matches.

Neighborhood association president Janet Good has found herself in the middle of the squabble.

Many of the concerns come from longtime residents who have seen young faces come and go.

The worries that property in the neighborhood will be flipped or that owners will become long-distance landlords is real, but Good said young people willing to fix up property well and then sell it improves the neighborhood in its own way.

“I’ve gotten in a lot of trouble saying, ‘These are young people, their points are valid, and they’re going to be here long after the old guard is gone,'” she said.

“I was absolutely floored,” Benjamin Winters said. “I had a really hard time understanding why someone wouldn’t want something instead of the bus barn.”

A shelter for old buses now occupies part of the 800 block of Pennsylvania.

Isaias Izquierdo, 27, lives just blocks away and expressed the same confusion about why some neighbors oppose the project.

“The reasons that they give don’t make much sense to me,” Izquierdo said.

Izquierdo and others said they saw contradictions in arguments made by those who wanted the development stopped or changed drastically. They say commercial space in the development will remain empty, yet they lament additional traffic the new commerce would bring. They say the expensive, one-bedroom lofts and apartments aren’t family-friendly, yet they voice concern over New York School down the street becoming overcrowded with new kids.

Benjamin Winters said there was one simple reason for all of the opposition.

“The overarching fear of change,” he said.

When Good and the association began backing Proudfoot’s splinter group, some younger residents said they were hesitant to speak up because they were in the minority.

But after a recent Journal-World article, the Winterses decided to put out an open offer: Anyone who felt the way they did about development, about the neighborhood, should write them. They posted an e-mail address on the newspaper’s Web site.

Since then, the couple said, they’ve received a lot of response, most of it positive – more young people in support of development regardless of property taxes or density. Other responses have been negative, some profanity-strewn, from longtime neighbors.

Resident John Myers said the younger folks who support the development don’t understand that many in the neighborhood have battled for compromises in the Harris project.

“Basically, they don’t know exactly what’s going on,” Myers said. “I think they get the impression that we’re totally against development. That’s not it at all.”

Rather, Myers said, older folks in the neighborhood simply want the image of the neighborhood preserved – they want to grow, just not in the drastic direction they perceived the Harris project would take them.

“We’re fine with development. We just want to make sure it’s done right,” he said.

But after nasty e-mails and other kinds of neighborhood pressure – real or perceived – some younger residents said the East Lawrence establishment view them as meddlers, property flippers, people who want to make a buck off a fixed-up starter home and leave.

“We have a lot of questions as to where that sentiment would come from,” Hodges said. “Those people who make those assumptions don’t know us.”