Young adults try to make most of affordable accommodations

Chicago ? Some are buying homes with friends or siblings. Others barter for rent – or live in buildings where residents share occasional meals, childcare and sometimes a car.

In particularly pricey areas, such as Manhattan, still others are living in “dorms for adults.”

Housing costs that can dwarf a starting salary are prodding young adults in many parts of the country to get increasingly creative about their living arrangements – well beyond the moving-back-with-the-folks scenario.

They do it to save money, share resources and, when possible, to build equity. Along the way, many also see it as a chance to build community in the impersonal, big city.

“We live in a world, nowadays, where you’re encouraged to isolate yourself,” says Brian Gleichauf, a 30-year-old high school teacher who grew up in suburban Chicago. “You live in your own little home and you have your quarter-acre of grass to mow and everybody owns their own lawn mower and everyone has their own cars.

Among other options, he and wife Jenny, a 27-year-old pastor, are looking into Prairie Onion Cohousing, a small group of Chicagoans who are considering converting a vintage apartment building near Lake Michigan into multigenerational, environmentally friendly housing. Building on an idea that originated in Denmark, residents would buy or rent their own units, but share common areas and whatever resources and duties they agree upon. 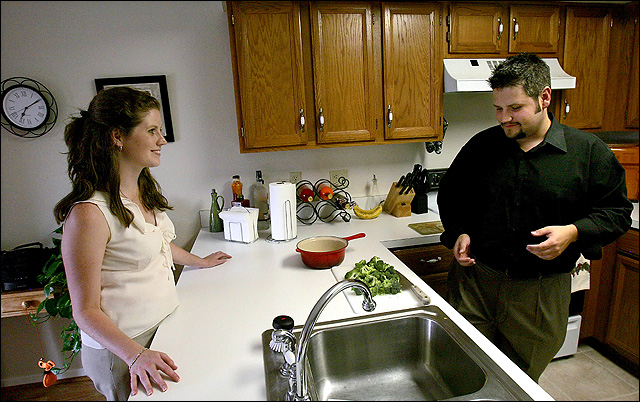 Jennifer Quint and her brother Jason prepare dinner at their home in Apopka, Fla. The Quints bought the house together this summer. They plan to rent a third room to a friend to help with expenses and then sell in about five years to buy their own places.

A similar project in Lawrence, Kan. – the Delaware Commons – has been in the planning stages for years, and construction is getting under way this summer.

Creating community is a driving force in the Gleichaufs’ case. But for some, sharing resources – and a mortgage – is a simple matter of economics, especially as interest rates have risen since spring.

“I quickly, quickly realized I wasn’t going to get anywhere on my budget,” says Jennifer Quint, a 25-year-old public relations professional. After her apartment building went condo, she bought a three-bedroom house in Apopka, Fla., with brother Jason, a 27-year-old accountant. They plan to rent the third room to a friend to help with expenses – with hopes of selling in five years to buy their own places.

Of course, such arrangements represent a small fraction of all housing deals.

“My sense is that it’s a growing trend, but it’s still a pretty small number,” says Paul Bishop, manager of real estate research for the National Association of Realtors.

More often, experts say, young adults are stretching themselves to buy property with little or no down payment and using interest-only loans. Those financing options became increasingly popular during the recent housing boom, but also carry risks such as a heavier debt load and an eventual day of reckoning.

Tougher to track are the cheaper housing deals made among friends or family or set up online, where bartering on such sites as Craigslist and TradeAway is in vogue.

After making an online posting, 26-year-old Christopher Stone is considering an offer of a two-bedroom house in Andover, Mass., in exchange for providing 15 hours of childcare a week for the family that owns the house. He’s then looking to rent the second bedroom to someone who could provide some care for his own young children.

In another case, Ian McIntyre says he and friends have flitted around the world since college, staying in touch by cell phone, MySpace and e-mail to set up mutually convenient housing situations. Now in Boulder, Colo., he has landed back with a platonic girlfriend he’s lived with on and off for the past five years.

“We agree that we probably will live together until one of us gets hitched. The convenience is huge, the companionship is huge and the financial rewards don’t suck either,” says McIntyre, who’s 25.

Companionship – or that need for community – is key for many.

It’s one reason Karen Falcon, an apartment building owner in New York, decided to try the “dorms for adults” approach by renting rooms instead of entire apartments.

Charging $725 to $825 per room in a four- or five-bedroom apartment – cheap by New York standards – Falcon goes with her gut when placing tenants with other strangers.

“Some people are kind of short or snappy. I don’t rent to those people,” she says. “You can hear in a person’s voice if they’re respectful, considerate, kind of sweet.”

In three years, she says she’s only had a problem with one tenant.

Still, these creative housing arrangements aren’t always perfect, as the Quint siblings in Florida have found.

After they bought the house in June, they quibbled over who would get the master bedroom and bath. Jennifer eventually won, but only after she agreed to take the smaller of the two common living areas as her own.

They also sometimes fight over noise from the TV. “And my brother doesn’t seem to understand when the trash goes out,” she says, laughing.

But she’s not sorry they bought the house together.

“It’s been quite an experience,” Quint says. “We get along better when we’re not living together – but so far, we’ve done really well.”