Topeka ? The transition chief for new Kansas Education Commissioner Bob Corkins said the kind of educational programs available at private religious schools should be available in the public school system.

“If it is your choice that your child receive a classical education, as at Cair Paravel or Veritas, they ought to be able to do those within the broad structure of public schools,” Daniel Harden said in a recent interview.

Harden is the head of a task force Corkins appointed after being hired by a 6-4 majority on the Kansas State Board of Education.

An education professor at Washburn University, Harden was hired by Corkins for $2,500 per month for up to three months to lead the transition.

In a telephone interview, Harden said he was a strong supporter of charter schools, which operate without some of the restrictions of traditional public schools.

“It’s always worth going down any path that is going to expand the ability of parents to make educational choices relating to their children,” Harden said. 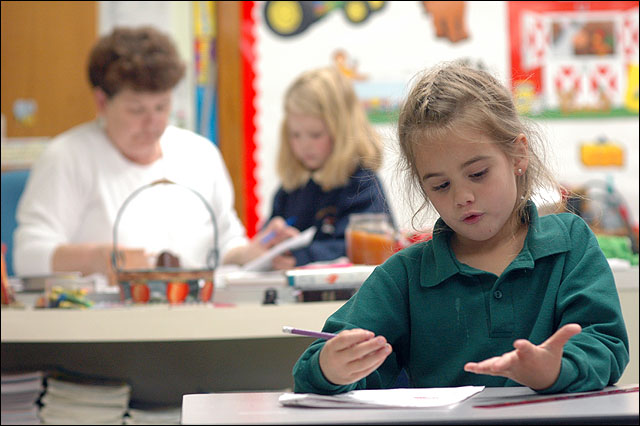 Delaeny Shelton, foreground right, works on a math exercise Monday in her first-grade class at Veritas Christian School. In the background, first-grade teacher Elaine Lackrone assists a student. Education Commissioner Bob Corkins' transition chief, Daniel Harden, says parents should be able to send their children within the public school system to schools like Veritas Christian in Lawrence or Cair Paravel-Latin in Topeka. It's about giving parents more choices, he said.

Corkins also is a strong supporter of private school vouchers and charter schools, and is expected to seek the board’s approval next month to ask the Legislature to enact laws supporting such initiatives.

Education groups oppose these measures, saying they would take funds away from public schools and help only wealthier Kansans who could afford to supplement state tax dollars with their own to send children to private school.

Per-pupil costs at private schools don’t include the required costs of transportation, special education, free and reduced meals, and other expenses, Tallman said.

Private schools are not required to accept every child, he added. “In every proposal we have seen for school choice, it’s the school that makes the choice, not the parents,” Tallman said.

Harden, a member of the Jefferson County West school board, said he supported public schools but would like to see more innovation.

Harden also defended his Washburn Web site, www.washburn.edu/cas/education/dharden, which declares “Traditional Education in the Year of Our Lord 2005” and provides links to numerous so-called conservative think tanks and publications. He said he didn’t support all of those organizations, but that his Web site offered a change from “what is normally offered.”

Harden said he would give Corkins a report this week on the transition team’s review of the Department of Education.

School groups have criticized the transition team for asking department personnel about whether they support private school vouchers. The groups said the question could be intimidating.

“I don’t know what the commissioner will finally decide on. It (the report) might be fairly nuanced. We certainly didn’t go into this preparing anyone for the chopping block,” he said.