But this time was different. The dunking of the goal posts in Potter Lake washed away 36 years of uninterrupted losses to the Nebraska Cornhuskers. And KU fans took full advantage of the opportunity to savor and celebrate their Jayhawks’ 40-15 thrashing of the Cornhuskers.

“This is the third time I’ve helped carry the goal posts and this time it felt the best,” said Andrew Meyer, a KU senior from Woodbridge, Va. “This was just euphoric.”

Jess Coffey climbed out of the water, shivering, after jumping in with a piece of the goal post.

“It’s freezing, but this was well worth it,” said Coffey, a Chapman sophomore.

This time a Potter Lake dunking wasn’t enough for some fans. About 25 students paraded one goal post upright down Massachusetts Street. At the Sixth Street intersection a Lawrence Police officer stopped the students from completing their mission of throwing the upright into the Kansas River.

“Thirty-six years of tradition, and we wanted to end it with a big splash,” said Adam Masonbrink, a KU junior.

Masonbrink and his friends then walked past Free State Brewing Co. and cheered with other KU fans. 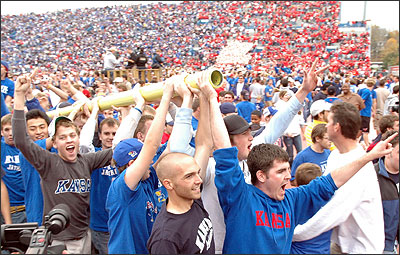 Elated KU fans carry a goal post out of Memorial Stadium after a 40-15 Jayhawk victory over Nebraska. Saturday was the second time in a week that fans made off with the goal posts. The first time was last Saturday after KU defeated Missouri 13-3.

Masonbrink said they carried the upright to Potter Lake and then to the Chi Omega Fountain on campus before their trek down Massachusetts Street.

An officer guarded the upright at 4:20 p.m., after the KU athletic department was notified of its location, a dispatcher said. It was removed about one hour later.

One group of Jayhawk fans found a different way to celebrate the victory.

Members of an online Jayhawk message board gathered at their tailgating site and jubilantly burned a Terry Allen towel one of them had kept since 2000. Allen, who was hired as KU’s head coach in December 1996, was fired in 2001 and replaced by Mark Mangino. They said they wanted to make sure the towel burning and the Nebraska victory removed any vestiges of the Allen era.