After 23 years in arctic Alaska, Ronnie and Almarie Chalmers relocated their family July 4 to hot-as-a-firecracker Kansas.

But seven weeks of scalding temperatures haven’t made the Chalmers family — son Mario is a freshman basketball guard at Kansas University — blow a fuse.

“We’ve had the opportunity to thaw out. It’s been very rewarding in that aspect,” said Almarie Chalmers, mother of Mario and husband of Ronnie, KU’s first-year director of basketball operations.

“I was telling a lady at the cleaners this morning, the beauty of the rain in Kansas is, you know it is going to go away,” Almarie said. “In Alaska, you get six, seven days of rain and get a little panicky. Here, you can relax a bit.”

In Kansas, Mario’s parents have enjoyed weeks of good night’s sleep, compared to sleepless day-nights in Alaska this time of year.

“One of the things I know I’ve noticed and shared with Almarie is we’re sleeping better,” said Ronnie, who snoozes like a baby in a small apartment with his wife. The couple won’t finalize the purchase of a new house in Lawrence until they sell their home in Charlotte, N.C.

“In Anchorage, there’s 19 hours of daylight. I’ve felt a little more energetic since we moved here. It could be a combination of being able to sleep at night without putting up the blinds — some people use aluminum (to shade the windows) — and the excitement of a new job.” 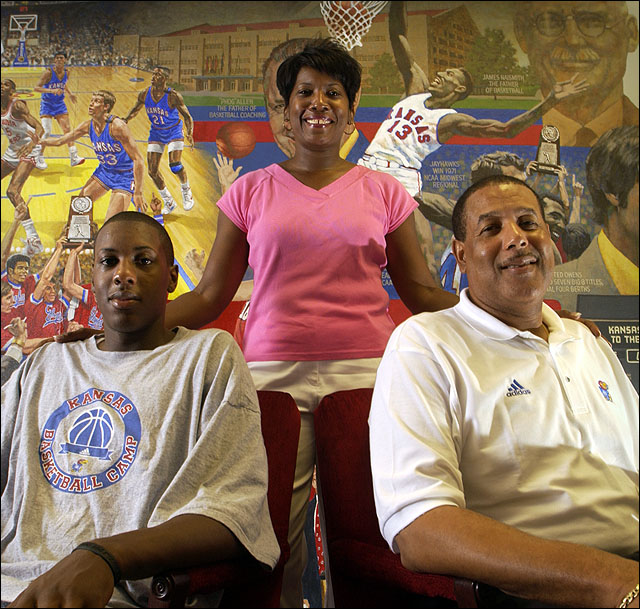 North Carolina, where high school sweethearts Ronnie and Almarie were born and raised, is where they thought they’d settle after Almarie in May earned retirement after working 20 years in an Alaska school district.

But Ronnie, who worked in the Air Force for 22 years (stationed in Massachusetts, North Carolina and Alaska) is jazzed about his new job for KU coach Bill Self. Before accepting the KU job in June, Ronnie was head coach at Bartlett High in Anchorage, where he compiled a 109-28 record and won two state titles in the past five years.

He will help organize day-to-day operations in the KU basketball office and will assist Scott Ward, senior associate director of academic and career counseling.

Ronnie Chalmers also will help lay down the law when needed. He worked as a medic and was player/coach for Air Force and Armed Forces basketball teams — squads that, in Ronnie’s words, “serve as ambassadors to promote peace through sports, through basketball.”

“I think it will be one of my strengths, because I’ve been in that disciplinary environment and I know it works,” Chalmers said. “You want the guys (KU players) to have fun, (but) we want to make sure they have all the right tools to make the right choices and understand if they don’t make the right choices there are consequences.”

Ronnie and Almarie will be watching one Jayhawk the closest. That’s their son, Mario — a 6-foot-1 McDonald’s All-American who is expected to start at KU.

Mario is happy to have his parents nearby.

“It’s good having them here, because I know I’ll always have them close by for support, to talk to them,” Mario said.

“I’ll go over there (to their place) sometimes,” he added, noting his mom is a “great cook.”

Almarie, who played college basketball at Winston-Salem State and Methodist College, is more than an outstanding chef. She was known throughout Alaska for her life-skills program that helped many students, including some at Mario’s Bartlett High.

“She would pray with us all the time, make sure we kept our focus, kept our grades up,” Mario said of his mom, who according to Ronnie was his “No. 1 assistant.”

“If anybody had problems, we could talk to her,” Mario said. “She was there all the time for us.”

Almarie plans to possibly start her life-skills coaching program in the Lawrence area “after we get settled a bit.”

“I’ve worked with numerous kids helping them get moving toward their God-given purpose, to try to figure out the direction they want to go in life, give them words of wisdom when they need inspiration,” Almarie said.

Self has fallen for the dynamic Chalmers trio, ignoring naysayers who said he hired Ronnie as a “package deal” to land floor general Mario.

Ronnie earned his bachelor’s degree in business administration from Wayland Baptist University and his masters in human-resource management and development from the University of La Verne in California.

“Ronnie and Almarie are awesome, totally into the team and the job,” Self said. “They are terrific. You always want to be around people who are excited, and they are excited being in Lawrence, Kansas.”

He instead will focus on his new job.

“I was thinking the other day, I am the only member of the staff who has raised teenagers,” Ronnie said. He and Almarie also have a 27-year-old daughter living in Charlotte, N.C.

“We will not strap the guys down or put handcuffs on them,” Ronnie said. “But they have to understand we are on a mission here. We are a high-profile program.

“The only way to do well in college is create a balance between academics, basketball and social life. I think I can share a lot of knowledge.”

Back to the gym

So can Almarie, who is looking forward to the start of basketball season when “we can do what we always do, spend most of our time in the gym.

“Ronnie told me he feels fortunate to have what he calls a ‘gym rat’ for a wife because I understand what he’s going through,” she said.

Now, if the family could just sell that place in Charlotte and move into the house they are eyeing in Lawrence.

“Paper plates and plastic forks work,” Almarie said, noting most of their furniture and household items were stuck in storage “someplace in Wyoming or Minnesota.

“Two people can justify eating out a lot,” she said, “but it’d be nice to maybe get into the kitchen sometimes, too.”