Tim and Carol Wilson found out too late their 15-year-old daughter, Kimberly, was playing something called the “pass out game.”

“We didn’t know,” Tim Wilson said Monday, in the hours before Kimberly’s funeral.

Kimberly, a popular, fun-loving student at Veritas Christian School in Lawrence, was found dead in her bedroom last week.

“The cause of death was compression of the neck,” said Douglas County Coroner Eric Mitchell.

Wilson said his wife found their daughter Tuesday morning. The girl had wrapped a plastic-coated bicycle chain lock around her neck, looped the chain over a dresser drawer, and seated herself in a position that cut off her air supply.

“We now have reason to believe our daughter had engaged in this behavior for at least a year, maybe two,” Wilson said. 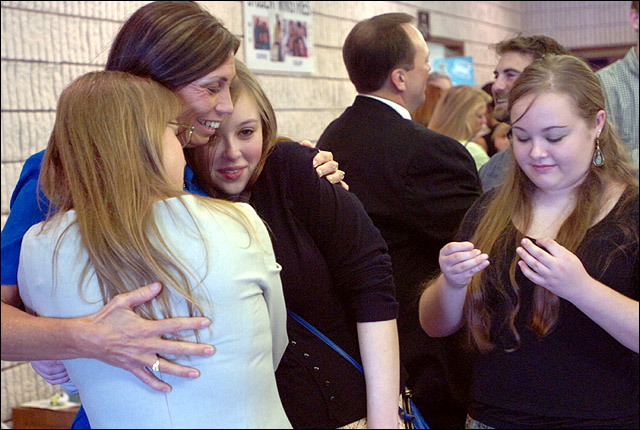 Carol Wilson, second from left, mother of Kimberly Wilson, is hugged by Carrie Mayhew, left, and Lauren Mayhew, 19, as Rebecca Mayhew, 17, waits at right to extend condolences Monday afternoon at the Free Methodist Church in Lawrence. Kimberly Wilson, 15, died accidentally last Tuesday at her Lawrence home while playing a pass

Among teens, this behavior – getting high by causing themselves to pass out – goes by several different names: “pass out game,” “fainting game,” “dream game” or simply “black out.”

And it is not uncommon.

“This is going on in every junior high in Lawrence,” said Tami Radohl, a Bert Nash Community Mental Health Center counselor at Southwest Junior High School.

“It’s important for parents to realize that it’s not just one type of child who does this,” said Carise Riemann, Bert Nash counselor at Central Junior High. “It’s not just the so-called troubled kids, it’s all kids. Nobody is immune.”

Pass-out games are not new, Riemann said. But in recent months, she said, increasing numbers of Lawrence teens appear to be trying it.

“I don’t think most kids understand how serious the consequences can be,” she said.

Usually, the game involves one person causing another to pass out and, seconds later, reviving the unconscious peer.

“It’s like anything else that creates a high or a buzz; it can lead to addictive behavior,” said Dr. Paul Loney, an emergency room physician at Lawrence Memorial Hospital.

When addiction reaches the point of passing out alone, Loney said, “they’re in deep trouble.”

At the coroner’s office, Mitchell agreed: “If you’ve put something around your neck and you’re alone and you lose consciousness, there’s no one there to correct the situation.”

Mitchell said there was no indication of foul play or suicide.

“We know our daughter did not commit suicide,” Tim Wilson said. “She had a history of playing this game. Her death was accidental.” 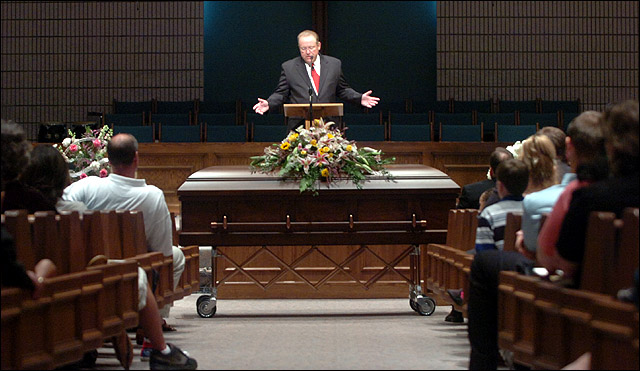 Kimberly was the third of the Wilsons’ four daughters.

Tim Wilson, who’s a software specialist at the Kansas University Endowment Association and pastor at the River of Fire Church, said the family was committed to warning others.

“We are very close to our children, and we did not know this was going on,” he said. “There were no outward signs – this isn’t like drugs or alcohol use, which a parent should be able to detect.

“We want parents to know this is out there.”

Taelyr Shelton, 14, said Kimberly – her friends called her Kimber – was a devout Christian who loved going to church.

“She was so full of joy, she had the most beautiful eyes, really big eyes,” Shelton said. “She liked going to my church, she just loved getting in there and worshipping. That was her favorite thing.”

Shelton said she, too, did not know Kimberly had been causing herself to pass out.

“She was my best friend,” said Shelton, who will a be a freshman at Veritas. “I’ve heard of the game, but I didn’t know she had played it. If I had, I would have told her it’s really dangerous.”