Michael Bruntz - Special to the Journal-World

The investigators had little evidence, even fewer leads, and the trail was growing colder with each passing minute.

“I think about it sometimes,” Bascue said, driving over the Arkansas River, “what we would’ve done if this had happened today.”

He’s not the only one. Investigators from around the country use vacation time and detour trips to visit Bascue’s office in Garden City to sift through seven blue binders filled with the fruits of the investigation.

One book is filled with the statements Perry Smith and Richard Hickock made to police after their capture Another is stuffed with crime scene photos, including two of boot prints that were among the few pieces of evidence gleaned from the crime scene that November morning in 1959.

The success of crime investigation TV shows such as “CSI” and “Cold Case” has brought the crime-solving possibilities of forensic science to the public. Though it’s unlikely the outcome of the Clutter case would have been different had the crimes occurred today, investigators probably could have solved it more quickly, thanks to advances in technology, police procedures and changes in the law.

Equipped with today’s technology, investigators might have obtained hair samples and run them through a DNA database of known fugitives or parolees. Today’s investigators still marvel at the detective work that broke the case.

“For the KBI, we call it our landmark case that put us on the map,” said Larry Thomas, a Kansas Bureau of Investigation agent. “It’s the rung on the ladder we all strive for.”

The KBI was founded in 1939, and at the time of the Clutter murders still was a relatively young organization with little experience working multiple murders. But agents like Alvin Dewey Jr., Clarence Duntz and others quickly got their feet wet in the investigation.

What investigators lacked in technology, they more than made up for with thoroughness and old-fashioned detective work. Bascue said police investigated each lead or tip, no matter how ridiculous it might have been — a long and tedious process.

One such lead involved Kenyon Clutter’s radio and binoculars, which police knew were missing from the crime scene. After Las Vegas police caught Hickock and Smith, the duo said in their confessions that they’d fled to Mexico City, where they pawned the items. As the trial approached, police knew they could bolster the prosecution’s case and validate Smith and Hickock’s statements if they found the stolen goods, so KBI agent Harold Nye went to Mexico City. He eventually found both the radio and binoculars in a pawnshop there.

“It confirmed and corroborated the story (Hickock and Smith) were telling,” Thomas said.

The big break in the case came midway through the investigation when Floyd Wells, a former hired hand on the Clutter farm, recalled conversations he’d had with Hickock while they were cellmates at the Kansas State Penitentiary in Lansing. Wells, who was still in prison, told police that Hickock said he was going to rob the Clutter house and leave no witnesses.

Wells’ intentions weren’t totally charitable when he implicated Smith and Hickock as suspects: The Hutchinson News had offered $1,000 for information leading to the apprehension of the killers.

A fellow inmate convinced Wells to divulge Hickcock’s and Smith’s names to authorities, and the information finally gave investigators a focus on names and faces. Wells eventually collected the reward.

Las Vegas police caught the fugitives Dec. 30, 1959, when two officers noticed Smith and Hickock’s car outside a post office. Investigators took the two into custody and immediately separated them.

Investigators who arrived from Kansas began interviewing the fugitives about the bad checks the two had passed in Kansas and other areas of the country. Fortunately, police had caught Smith and Hickock with a box that contained the boots that matched one of the prints left on the Clutters’ basement floor.

After a few hours, the conversation about the bad checks turned to the murders. Hickock was the first to crack, and when prodded about the murders, said, “Whoa, now. Hold on there. I’m no goddamn killer,” according to the book. It helped investigators that Smith and Hickock were separated. They couldn’t communicate, couldn’t corroborate one another’s stories.

KBI investigators hedged the truth, telling both Hickock and Smith there had been a survivor at the Clutter house. Capote said in the book that the possibility of a survivor hit the suspects like a lead hammer. The boots obtained from Smith and Hickock matched the boot prints found at the crime scene, erasing their alibis. After investigators showed Smith and Hickock photos of the bloody boot prints, the captured fugitives knew they were caught and started talking.

Had the crimes been committed today, investigators might have had more difficulty coaxing confessions out of the criminals.

So-called “Miranda warnings” were mandated after the U.S. Supreme Court in 1966 decided in favor of a suspect who signed a confession and later challenged his conviction saying he had not known the law protected him from making self-incriminating statements.

Although the Miranda warning wasn’t required at the time of Smith and Hickock’s arrests, investigators testified that they took great care to not obtain information illegally or through underhanded means.

According to the court transcript, Dewey testified: “I told Perry Smith he did not have to make any statement; that anything he said could be used in court against him. I also advised him that we were making him no promises of immunity or rewards. He was further advised that he had the right to be represented by an attorney.”

In Smith and Hickock’s case, a lawyer wasn’t present, and they could’ve abstained from making self-incriminating statements despite the evidence pointing to their guilt.

Bascue said the subsequent confessions and how they were obtained were also a little fishy.

Although Hickock and Smith admitted to the murders in Las Vegas, they didn’t give an official confession until they arrived in Kansas three days later.

In the official statement, Smith confessed to all four murders, although he’d earlier said he and Hickock each killed two members of the family. Bascue said he believed the original statement made in Las Vegas to be what actually took place and that the change raised questions as to what investigators talked to the criminals about during the car trip.

Bascue said he was impressed by how much freedom investigators had while trying to solve the crimes. He said it’s difficult to get suspects to talk after they’ve been taken into custody, let alone obtain a confession dictated to a court reporter, like those the KBI agents obtained from Smith and Hickock.

Assistant prosecutor Logan Green asked Dewey on the witness stand whether investigators used any duress to obtain the confessions. “No sir,” he testified.

Upon cross-examination, Hickock’s attorney, Arthur Fleming, asked Dewey whether he could tell whether Smith knew his rights before investigators interrogated him.

Dewey answered, “He said that he had been in the penitentiary long enough to know his rights.” 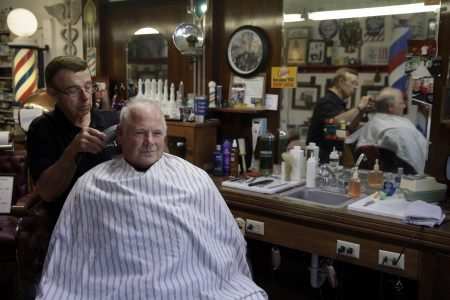