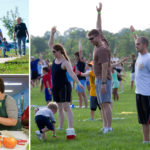 LiveWell Douglas County is celebrating its 10th anniversary in 2018. These file photos show a few examples of initiatives LiveWell has spearheaded. Clockwise from top left: This photo from 2010 shows Bennett Stammeyer, 6, Nevaeh Hogan, 6, and Natalie Caroll, 6, all part of the 300-student-strong marathon club at Langston Hughes Elementary School; participants stretch as the second "World's Largest Community Workout" gets underway in 2010; Lily Siebert, education outreach assistant at The Community Mercantile, shows Tavion Doleman how to work a garlic press at the Boys and Girls Club of Lawrence in 2010.

How do you make a splash and let people know about your new organization?

A news release, flyers or a Facebook page are a few options. Or you could bring nearly 3,000 people to the University of Kansas’ Shenk Recreational Sports Complex for the “World’s Largest Community Workout.”

That’s what LiveWell Lawrence did in 2009, shortly after a grant from the Kansas Health Foundation allowed the Douglas County Community Foundation to launch the initiative in 2008.

The coalition now known as LiveWell Douglas County comprises local health advocates from many walks of life, and it’s celebrating its 10th anniversary this year. 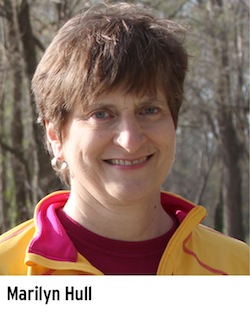 In the past decade, LiveWell has done a lot of strategic planning and behind-the-scenes work. But it’s also materialized throughout the community in visible, tangible ways that Dan Partridge, director of the Lawrence-Douglas County Health Department, called “expressions of bigger efforts.”

Here are a few ways you might not realize that LiveWell, oftentimes in partnership with others, may impact your daily life.

The first school garden to be part of the “Growing Food, Growing Health” program broke ground at West Middle School in 2010, and several of the Lawrence school district’s middle and elementary schools have added gardens since. Some have even begun to sell their crops at local farmers markets.

“School gardens (are) connected to the purchasing policies that the schools have adopted … to try to bring in local and fresh foods,” Partridge said. Those policies also include the Farm 2 School program, which aims to purchase food from local farmers and link the classroom to the garden and lunchroom to bolster kids’ nutrition education.

The gardens mean kids can get their hands dirty, learn about growing fresh produce and even taste their hard work when it comes to fruition.

LiveWell Douglas County has invited the public to a free breakfast in celebration of its 10th anniversary.

The event will also recognize 2018 Culture of Health Action Award winners and recipients of community wellness grants. For more information and a full list of those to be honored, visit livewelldgks.org.

“It’s kind of the tip of that spear, where kids can touch and feel and sense things,” Partridge said. “They’re not really going to care about the policy or all of that other behind-the-scenes work, but it’s one of those ways to engage and hook kids into adopting better lifestyles down the road.”

The gardens are one example of LiveWell’s initiatives to boost access to locally grown produce. Another is the “Market Match” program, which launched in 2014. It matches Supplemental Nutrition Assistance Program (SNAP) benefits — aka food stamps — dollar for dollar up to $25 at farmers markets, so recipients can actually spend $50. Since 2016, the Double Up Food Bucks program has allowed virtually the same through a federal grant.

The Summer Food Service Program, which offers kids ages 1-18 free lunches during the summer, involves LiveWell, the school district, the city, the local Kansas State University Extension office and more. Partridge said it is another example that illustrates how organizations can come together to tackle a major need.

“When we work in our silos, we can’t make the impact or the progress that we can if we worked collectively,” he said.

The WorkWell work group hosts an annual symposium to educate employers about best practices to not only help their employees feel better at work, but also to help them be more productive, Partridge said.

Some examples could include smoking policies for company grounds and promoting cessation training; educating employees about the health effects of sitting all day; and getting more physical activity in during the workday — “finding ways to kind of make that fun and turn it into a habit for folks,” he said.

Though efforts haven’t been uniform across all organizations, Partridge said several workplaces have also implemented healthier choices in their vending options. He said the more that can happen, the better it will be.

“When you can start changing the number of choices out there and making the healthier ones more not only available but socially acceptable, behaviors do change,” he said. “So I see it here every day, just in the work we do to make sure that we’ve got fresh fruit, vegetables, cheese; all of those things are here and affordable and accessible.” 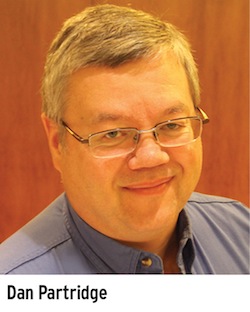 Community bike rides; marathon clubs in Lawrence schools; improvements to the area trail system; bicyclist and pedestrian safety education in schools, plus safe routes for kids to reach them — these are among examples of how the general public can “touch and engage and live out” policy-level changes, Partridge said.

“LiveWell has been really instrumental in creating that active transportation system,” he said.

In 2012, the Lawrence City Commission approved a “complete streets” policy that aims to make new and rehabilitated city streets more pedestrian-friendly through shared-use paths, sidewalk improvements, accessible curbs and other such means.

These changes don’t happen overnight, but several projects are fully or partially implementing the complete street concepts. Those include two bike boulevards the City Commission approved in May — one on 21st Street, from Iowa Street to Massachusetts Street, and one on Lawrence Avenue, from Harvard Road to Bob Billings Parkway.

The nation’s largest e-cigarette maker, Juul, earlier this month announced plans to stop selling its fruity flavors in stores and “pledged other steps to make it clear that it doesn’t want kids using its e-cigarettes,” The Associated Press reported.

Partridge said he believes the company did so in large part because of public advocacy groups — such as LiveWell — around the country.

LiveWell’s Tobacco 21 work group has been at the helm of a policy that would raise the age to purchase tobacco from 18 to 21. The Douglas County Commission approved the change in September, and the Lawrence City Commission is considering it.

“Speaking personally, that’s some of the most important work in front of us, that Tobacco 21 piece, and changing the direction we’re on with our youth and their use of e-cigarettes,” Partridge said.

Additionally, the cities of Eudora, Lawrence and Lecompton have restricted the use of tobacco in public parks, and KU went tobacco-free in July.

Asked where he thinks the Lawrence-Douglas County area stands in comparison with other communities, Partridge said above average but not high performing.

“I say that because we have some real big problems that we just need to make progress on. Income inequality, housing — big social problems that really hold us back,” he said.

He added that binge drinking was a problem we tended to write off — “‘kids will be kids,’ or ‘college students will be college students’ — but are we doing what’s right by them when we just stop there?”

LiveWell has also established an ad hoc committee on sexual violence prevention, which is in the process of conducting a nine-month community needs assessment in Lawrence. It currently has a survey online at stacarecenter.org/survey and invites all Lawrence residents ages 18 and up to participate.

Partridge said the coalition was always looking to grow its ranks.

“LiveWell is only as strong as the people that are in it and the commitment and the work that they do,” he said.

For more information or to get involved, visit livewelldgks.org.