‘I knew I could fight and kill somebody if I had to’: New show shares views of women veterans 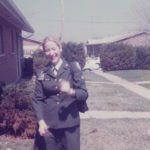 Sherry Gill, Lawrence, served in the U.S. Army from 1976-1979. She will recite an essay she wrote about her experiences in the military in a Lawrence Arts Center show "Rethink: I Am a Veteran."

When Lawrence resident Sherry Gill joined the U.S. Army in 1976, she said she was willing to kill if she needed to.

But that’s not how the higher command originally saw her, or any woman, contributing to the armed forces when she was placed in the Women’s Army Corps. The WAC was a military unit that placed women in “gender appropriate” roles, according to the National Museum of the United States Army.

“I had to do a lot of ironing, pressing and starching of uniforms,” she said. “I wanted to be a soldier. I knew I could fight and kill somebody if I had to, if that was needed.”

Gill and other women in the WAC thought the ironing and other chores they were required to do were meaningless because they all wanted to be combat soldiers, she said. Many of those women eventually got their chance because the WAC was disbanded in 1978, and Gill joined the first group of women in the Army to move over to the combat roles. 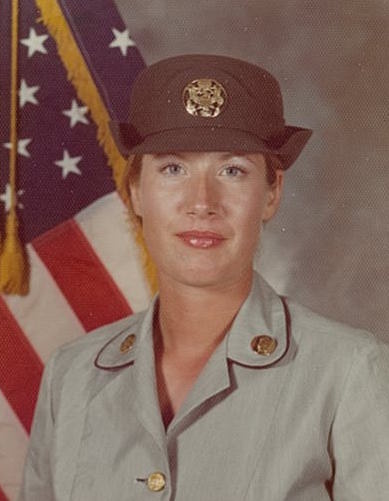 Sherry Gill in her Women’s Army Corps uniform. When the WAC was disbanded in 1978, Gill was part of the first group of women to become combat soldiers.

She said the women were first tested by throwing dummy grenades.

“They wanted to see if we could throw,” she said. “We thought that was ridiculous because we knew we could throw, were strong and they were clueless. (The Army leaders) still hadn’t wrapped their head around women being soldiers.”

Gill, who now works for the Douglas County Sheriff’s Office, served in the Army from 1976 to 1979 and then in the National Guard for four years in the late 1980s and early 1990s, she said.

“In the new Army, with the National Guard, we didn’t do any kind of ironing,” she said. “I was a real soldier, and I was respected for that.”

Gill’s experiences in the armed forces, along with the experiences of seven other local women veterans, will be reflected in a Lawrence Arts Center performance, “Rethink: I am a Veteran,” which will run during Veteran’s Day weekend. 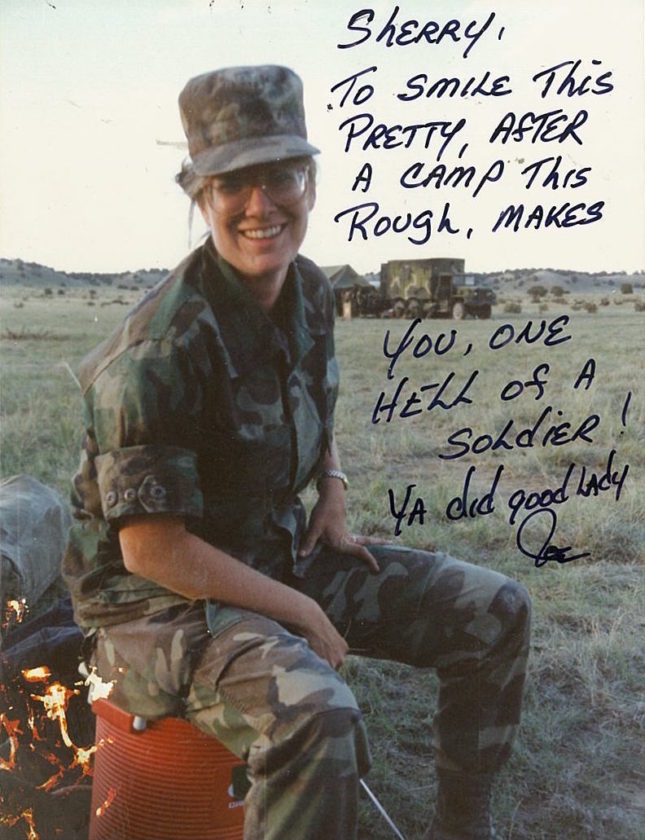 A note to Army veteran Sherry Gill, Lawrence, is written on a photo of her after training. Gill originally served in the Women’s Army Corps before becoming a combat soldier in the late 1970s.

Elizabeth Sullivan, director of the show, said local actors will be performing several vignettes based on interviews with eight local veterans. Gill and Brooklynne Mosley, another veteran whose experiences will be in the show, will also perform some of their own stories. Gill said she will read from the essay she wrote, called “Grenades Beat the Hell Out of Ironing.”

Although the show will portray many of the struggles the women faced in the Armed forces — be it sexual abuse, glass ceilings, toxic masculinity and other issues — Sullivan said the show also goes into the many positive aspects of the military, such as the education and camaraderie.

“It’s this piece of society that really opened up their minds,” she said. “The through line is that all of these women all definitely gained something and they would do it all over again if they could, but there are definite challenges when it comes to being in the military as a woman.” 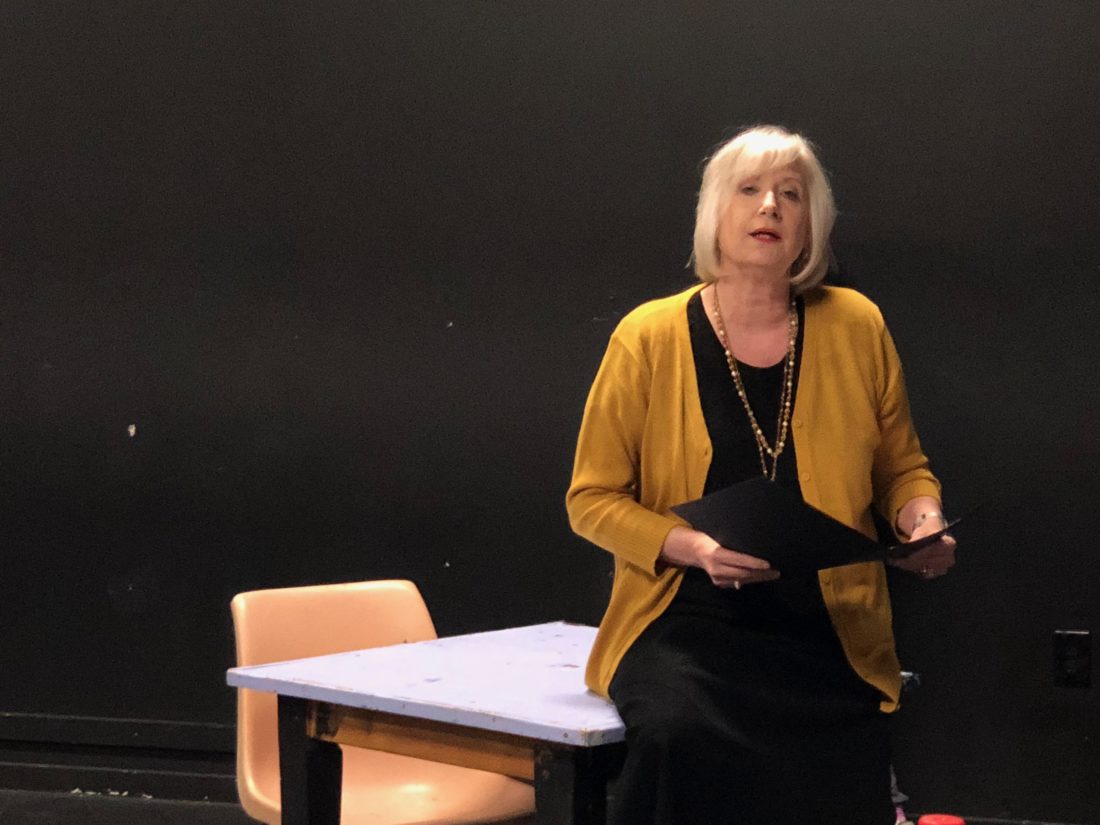 Sherry Gill, a Lawrence veteran, reads her essay “Grenades Beat the Hell Out of Ironing” during rehearsal for “Rethink: I Am a Veteran” on Nov. 1, 2018.

Lora Rimmer, a veteran from Paola who now lives in Baldwin City, said there were some difficulties during her career in the Army, but there were plenty of great aspects, as well.

“There were hard times, with mortars falling or you’re being deployed when kid’s 10 months old,” she said. “Those are all really hard times, but we’re not broken. So much is in the press these days about (sexual assault), so there is some really tough moments. That’s true for all soldiers.

“But we’re not broken. We had moments of camaraderie and support of one another and family. You know you made a difference. That’s the nugget that you can hold onto.” 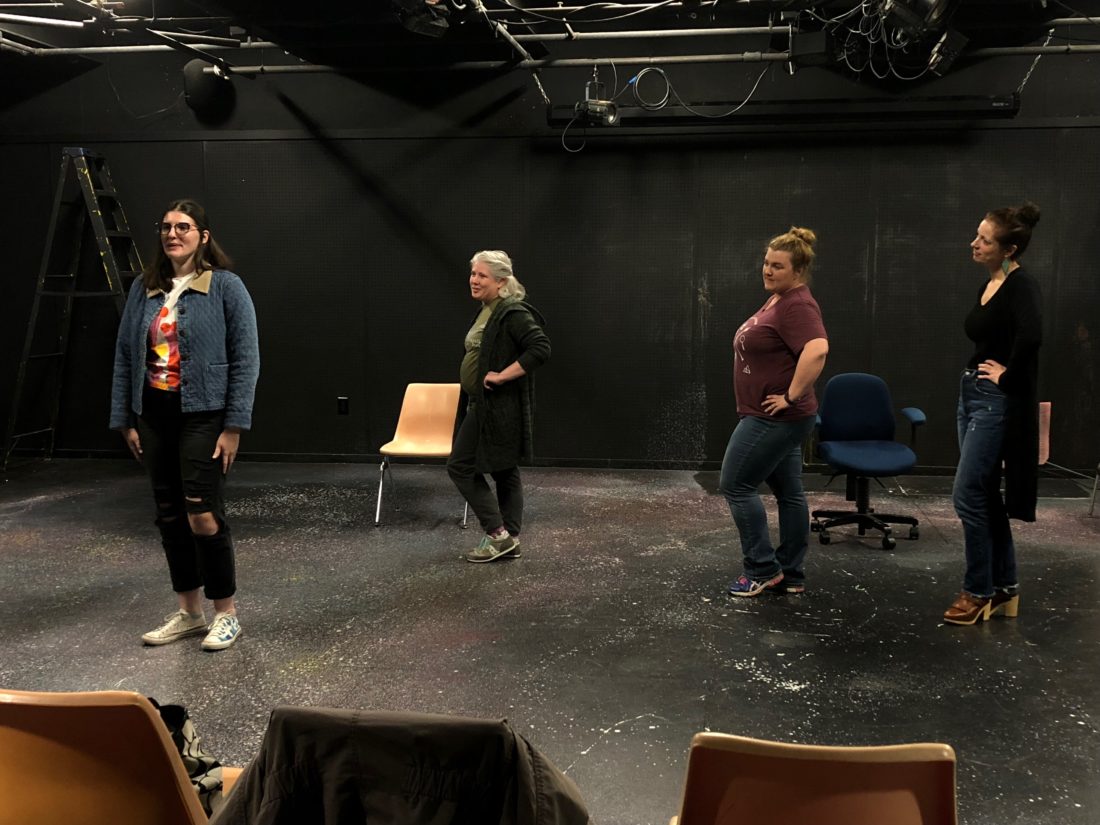 Actors (from left to right) Anina Supernaw, Dana McCoy, Samaria Fleig and Kirsten Paludan perform during rehearsal for “Rethink: I Am a Veteran” on Nov. 1, 2018. In the scene, the actors portray women veterans’ military experiences in a parody of beauty pageants.

Rimmer joined the military service through ROTC at the University of Kansas. She also served in the National Guard.

She served several roles throughout her 28-year career, beginning as a signal officer, which works with communications, and ending as a military science professor to train young officers at a university in Texas.

She said the most interesting part of the show for her has been meeting the women who served in the military before her.

“These are the ladies who paved the path for me,” she said, and she noted that she retired in 2016 as a lieutenant colonel. “That’s a higher rank than any of these ladies had. If they hadn’t done and been part of the military and performed the way they obviously did, then I would have never been able to make that rank.”

Since retiring, Rimmer said she’s noticed other women have moved further up the ranks than she had.

“It’s really awe-inspiring being in a room with these ladies and know that they came before me,” she said.

Nancy Hope, who served in the Navy from 1976-1980 as a line officer in Puerto Rico and Japan, said her military career gave her a new perspective on the world.

After leaving the Navy in 1980, she continued to live in Japan working as a designer for a clothing company. She eventually returned to the United States and joined the University of Kansas in 1990, serving as the associate director for the Kansas Consortium for Teaching about Asia.

She said she’s excited for the show because it reflects on a part of her life that she hadn’t thought about in a long time.

“For many of us, we put it on a shelf and it was finished,” she said. “This way allows us to reflect and share.”

The show will premiere at 7 p.m. Friday at the Lawrence Arts Center, 940 New Hampshire St. More performances are scheduled for 3 and 7 p.m. Saturday and 3 p.m. Sunday. Tickets are $15 for adults, $12 for seniors and $10 for students and veterans.