University of Kansas leaders hosted an opening ceremony for KU Innovation Park's newest research and office building, shown here on Aug. 17, 2022. The building is on West Campus, next to the what used to be known as Bioscience and Technology Business Center, which is also near the KU pharmacy school.

A $24 million research and office building will house nearly a dozen tech companies and eventually add about 225 employees to the University of Kansas’ West Campus, a Lawrence crowd was told Wednesday.

An opening ceremony for the recently completed building at KU Innovation Park attracted many of the state’s top leaders on Wednesday, and also produced much talk about how the new KU-led project will produce benefits far beyond the jobs that locate there.

“As I’ve dug into the numbers, I’ve seen the importance of this innovation campus,” Gov. Laura Kelly told the crowd, which also included U.S. Sen. Jerry Moran, and multiple leaders of the Kansas Legislature. “It enables our state to not just keep up with economic trends, but to set them ourselves.”

But, make no mistake, the jobs are good too.

University of Kansas Chancellor Douglas Girod and Kansas Gov. Laura Kelly were both on hand for an opening ceremony of KU Innovation Park’s newest research and office building on Aug. 17, 2022.

The new 66,000-square-foot building — the third phase of KU Innovation Park, which is on a portion of West Campus north and west of 23rd and Iowa streets — is known as a “graduation facility.” It is designed to take companies that are outgrowing their space in the business incubator building of KU Innovation Park and move them into larger space with more extensive laboratories.

There’s also something else larger about the new space: the leases. They average 10 years in length, which means companies that move into the new space are less likely to leave the city. Economic development leaders for years have lamented that the community has had some success in growing start-up companies, only to see them move to other communities as they grow.

“As a university, our mission is to educate the leaders of tomorrow and to help create healthy and vibrant communities, and this is a big part of a vibrant community,” KU Chancellor Douglas Girod told the crowd. 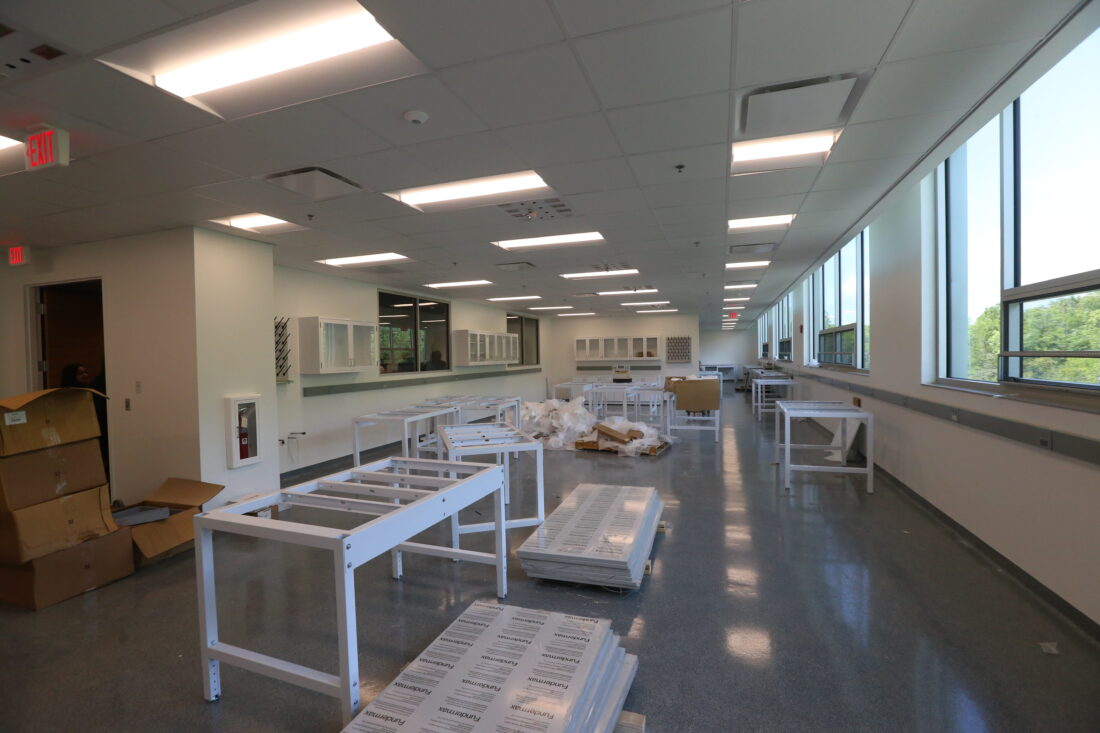 Leaders of KU Innovation Park said 10 companies already have signed on to locate in the building, with one already in operation in the facility and others in the process of moving in and putting the finishing touches on laboratory space. An 11th company — an architectural and engineering firm — is in the final stages of completing a deal to move to the site. When that deal is done, the facility will be nearly fully leased.

However, since most of the companies locating in the new facility are moving out of the incubator space, there will be an opportunity to add 10 to 20 smaller companies in the incubator facility.

KU Innovation Park executives are estimating, all told, that the new building will allow Innovation Park to house about 425 employees in the three buildings that now exist in the park. That’s an increase of about 225 employees over what was possible before the new facility.

Leaders continue to expect a variety of companies to locate in the park, ranging from traditional tech firms like biomedical startups to less-obvious technology entities, such as design and engineering companies. The Kansas Department of Transportation has its bridge and road design group in the building, for example, which has served as a catalyst for attracting private engineering firms that work with the state.

JEO Consulting is the first business to occupy the newest research and office building at KU Innovation Park, which hosted an opening celebration on Aug. 17, 2022.

And despite its early reputation as an incubator, the KU project isn’t limited to companies that are in their fledgling stages.

On hand Wednesday were officials from ADM, one of the largest food processing and agribusiness companies in the world. It is one of the firms moving from the incubator facility into the new graduation facility. Currently, ADM has four post-doctoral researchers in its Lawrence office, but the new space is being set up to accommodate 14 people, likely a mix of new full-time positions and interns.

The company has figured out what other large firms — Garmin, the giant in the world of GPS, was one of the first big firms to move into park — also have seen.

“It is a great pipeline for us,” Derek Butler, the senior scientist in charge of the Lawrence operations, said of how the facility helps ADM hire KU students.

Chemical fume hoods are in place in a new laboratory for ADM, which is one of the tenants for KU Innovation Park’s newest research and office building, pictured here on Aug. 17, 2022.

The ADM story is one KU leaders hope to see repeated. Butler said ADM long had been aware of some KU researchers, and then in 2012 began working with one particular one more closely as part of a USDA grant-funded project. At that point, the company decided it would make sense to have some ADM employees located closer to the research. Now that KU is creating new facilities, it makes sense to have even more of them.

“We might be doing two- to three-year projects here where we really tap into a professor’s knowledge,” Butler said. “We wouldn’t really be able to do that at the main facility.”

Girod said the idea behind Innovation Park is to allow both students and faculty to interact with the private sector in ways that are beneficial to all involved. Now, the challenge is figuring out how to do it on a larger scale.

As we’ve reported, KU has at least three more phases it hopes to complete at Innovation Park. The first two phases are a pair of $30 million buildings that would house a pair of specialty research projects. One would house the Kansas National Security Innovation Center, which would focus on research related to cybersecurity and other innovations that could be used by the homeland security or defense industries. The other would house the Kansas Bio-Innovation & Sustainability Center, which would focus on research related to green energy and a host of environmental issues, among other topics. That one could be especially beneficial to companies like Panasonic, which plans to build a $4 billion plant in De Soto to manufacture batteries for electric vehicles. The plant would be less than 30 minutes away from KU Innovation Park.

Girod said KU was involved in the state’s efforts to attract Panasonic and believes there is good potential to grow the already significant relationship with the company.

“We know there may be an opportunity for Panasonic to bring some of their research and development here in the years ahead,” Girod told me after the event. “That could be a huge opportunity.”

In addition to those two buildings, KU leaders have said they envision about 10 new buildings over the next 15 years that would provide 800,000 square feet of research, laboratory and office space. Additionally, KU Endowment — which owns much of the property on West Campus — has concept plans that show about 75,000 square feet of retail development and about 300 living units being constructed on or near West Campus as part of a plan to make Innovation Park more of a live, work and play destination.

KU leaders are hoping to get word soon on whether Innovation Park will receive a huge state grant that would provide a major boost in completing the next research and office phases of the project. As we’ve reported, Innovation Park has applied for a $50.8 million grant through the state of Kansas’ SPARK program, which is funded through federal pandemic relief funds.

Word on funding awards for those SPARK programs has been slow to develop, though. Kelly told me after the event that some meetings on those funding issues had recently been delayed but that the process was still moving forward. Girod also said he didn’t have a timeline for when KU might learn of the fate of that grant application.

But Girod told the crowd at the opening ceremony that KU leaders are positive more is to come with Innovation Park.

“Don’t get too comfortable,” Girod said. “We will be back here for another ribbon cutting. We are going to keep this train rolling.”

More military aircraft to fly over KU stadium Saturday, with a practice run on Friday

KU enrollment grows for the year, fueled by largest freshman class since 2008

Iranian students at KU decry brutal government crackdown; ‘they are killing people in the streets’

The University of Kansas' Department of Theatre & Dance will host five live shows this season, including the ...

Thanks to a new federal grant, the University of Kansas is creating a new center to prevent youth violence in ...