Face-mask program being developed for restaurant workers; some believe up to 40% of local restaurants won’t reopen 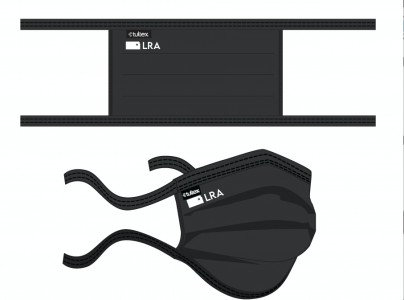 The Lawrence Restaurant Association plans to order at least a couple thousand masks like the ones above to outfit local restaurant workers once establishments reopen for dine-in service.

Lawrence restaurants aren’t fully open yet, but already some of you have been asking whether their employees will be required to wear masks when they do start serving dine-in customers again.

Formal guidelines haven’t yet been announced by local public health officials, but if a group of restaurant leaders have their way, diners are going to be seeing masks at every turn and table.

Rick Martin, co-chair of the Lawrence Restaurant Association, said that group was working to order thousands of reusable masks that will be distributed to restaurant employees across the city.

So, when the waitstaff drive the forklift bringing my platter of barbecue and burgers, I should expect them to be wearing masks. (No word on whether hardhats will have to be worn if the crane has to be brought in.) That’s the happy mental picture that can sustain us until restaurants do fully reopen, presumably later this month and perhaps as soon as May 18.

But Martin — who has been in the restaurant business since the late 1980s, most recently as a former partner of Limestone pizza — is girding the public for an unhappy picture too. He’s pretty sure there are going to be significantly fewer restaurants in Lawrence.

“If I averaged my own prediction with what I’ve heard from others, if we are at 60% of the restaurants we had before the crisis, I would be surprised,” Martin said.

In other words, Martin thinks the pandemic will push about 40% of all Lawrence restaurants out of business.

“It is just a low-profit margin business, with low assets and not a lot of safety nets to keep you going,” Martin said.

Those restaurants that do reopen then will be in a serious fight for survival, Martin said. Making customers feel safe and comfortable will be a big key to success. That is where the mask program hopes to help.

The masks will be washable and, importantly, more comfortable and functional than many of the homemade varieties. Martin said the restaurant association thought it was important to provide restaurant employees with quality masks — the plan is for each employee to have two masks to accommodate washing schedules — since they are going to be viewed as critical pieces of equipment.

“I think it is important to have a mask that is made for what it is supposed to do,” Martin said. “If you are constantly touching the mask to adjust it or make it more comfortable, that totally defeats the purpose of the mask.”

The masks also will have one other feature: a logo of the Lawrence Restaurant Association. Martin said the group thought it was important that diners — and employees, too — are reminded that there is an organization that is spending a lot of time thinking about safety and other big-picture issues for the local industry.

“We want to establish a unified emotion in this reopen project,” Martin said. “If lots of people are wearing the same mask, it will provide some comfort and take some of the fear out of it.”

Current plans call for the general public to be able to buy the masks too. Martin said Cottin’s Hardware has agreed to sell the masks, and details are still being worked out on whether the masks can be used as a fundraiser for the association, which has taken on several charitable endeavors during the pandemic. The largest has been a fund that has distributed $70,000 to about 350 restaurant employees who have lost work because of the pandemic.

Even if the masks don’t end up being a big fundraiser, Martin thinks there is value in letting the public be part of the effort.

“It helps create that unified feel and that we are all in this together and want to support each other,” Martin said.

Restaurants that are interested in ordering masks through the program are asked to reach out to the association via email at eatdrinklawrence@gmail.com.

Here are a few other comments from Martin on what the industry is thinking as it waits to learn whether public health officials will allow restaurants to resume dine-in service on May 18:

• There are a lot more cleaning issues to think about than the average layperson may realize. One is public restrooms at restaurants. Will staff clean the restrooms after each use, or will restaurants install self-cleaning stations in the hope that customers will clean before and after use?

• Also expect a condiment conundrum. Martin said it probably would not be feasible for many restaurants to have ketchup, mustard, salt, pepper and other condiments on the table, which was common before the pandemic. Anything that multiple people touch could be problematic. Instead, expect more condiments to be delivered to the table in single-use servings, which may increase waste because many of those containers likely will be of disposable plastic.

• Finding workers to staff restaurants will be difficult early on. Martin said many employees were college students who have left Lawrence with the cancellation of in-person classes, and other employees simply may not feel comfortable going back to a job that requires so much interaction with the public. Plus, some may be reluctant to end their unemployment benefits, now that workers are receiving a $600 per week booster payment through federal legislation. “That absolutely is a very real issue,” Martin said.

• Martin thinks Lawrence diners will be fairly cautious in making a return to in-person dining, unless there is some major piece of good news between now and May 18. “The news is changing people’s moods on a daily basis.” Absent that, he expects business to start slowly. He thinks some restaurants also won’t open immediately after the restrictions, instead choosing to wait until capacities can be increased.

That may surprise some people, but the public doesn’t often understand how important volume is to a restaurant’s bottom line. Martin, who has served as an instructor for multiple culinary and hospitality classes, said an average net profit in the industry often is 5% to 7%. To put that another way, a 7% margin on an $8 meal results in a 56-cent profit. If the volume isn’t there, it makes for a long day’s work with little to show for it.

To make matters worse, some of the best times to capture volumes have been lost this year.

“The NCAA tournament, Mother’s Day and graduation, those are a big part of your year for a lot of restaurants,” Martin said. “The long-term financial crisis for restaurants won’t be over on May 18 by any stretch of the imagination.

“I’m just pleading for people’s support and for them to stay in this together, be understanding, and get out and spend money when they can.”