A look at what retailers reopened on the first day they could; nonprofits hope new Giving Tuesday Now day takes off 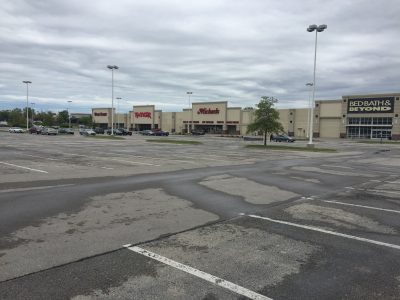 The city's largest shopping center — Pine Ridge Plaza, which stretches between 31st and 33rd streets on south Iowa — was largely devoid of customers on Monday. Many of the major retailers, including Kohl's, Bed Bath & Beyond and TJ Maxx did not reopen for traditional shopping, even though local health orders were lifted to allow such re-openings.

At downtown Lawrence’s Rally House, the hoped-for outcome is right there in its name: a rally. But shoppers for the most part didn’t even stir, let alone rally, on the first day that many “nonessential retailers” were allowed to reopen following an easing of Douglas County’s stay-at-home orders.

At about 2:45 p.m. on Monday, a clerk at the sportswear shop Rally House said the store had one customer since its 10 a.m. opening.

It appeared to be that type of day across much of Lawrence, as shoppers were not out in any significant numbers on a cloudy and rainy day, and many of the city’s largest retailers remained closed.

The city largest shopping center, Pine Ridge Plaza stretching from 31st to 33rd street along Iowa, just as easily could have been named Whispering Pines. It was largely quiet. Anchor stores Kohl’s, Bed Bath & Beyond, TJ Maxx and World Market all were closed to traditional shopping, even though the change in the Douglas County stay-at-home order would have allowed each of them to open. Some of the stores, most notably Kohl’s, had started curbside service.

The major exception in the shopping center was Michaels, the hobby store. It was open for traditional shopping, although with shortened hours. While my main hobby during the pandemic has been seeing how high I can stack my hair (I’m hoping the ceiling fan lopes some of it off,) more traditional hobbies must be in high demand with the pandemic. Hobby Lobby, which is across the street from the Pine Ridge Plaza, was one of the other large south Iowa Street retailers that was open for full shopping. Both Michaels and Hobby Lobby had previously been open as essential retailers, but then pulled back after the companies nationally faced backlash. Shopping activity appeared mild to slow at both stores on Monday.

A couple blocks north, the big retailers Dick’s Sporting Goods and Ulta Beauty both were open but continued to limit customers to curbside orders. The biggest retailers on the corridor, Walmart and Target, have been deemed essential retailers and have been open for traditional shopping pretty much throughout the pandemic.

In downtown Lawrence, the bag was a bit more mixed, but no more full of shoppers. Other than a handful of stores, like Weaver’s Department Store, most downtown shops have been closed under Douglas County health orders.

Boutiques, though, were showing signs of life on Monday, although many were still keeping their front doors locked. The Etc. Shop, 928 Massachusetts, was requiring people to call ahead or knock on the door. Yes, knocking is a part of today’s retail world, even though there were indications shoppers hadn’t yet gotten used to the idea.

Some businesses, like the Toy Store, 936 Massachusetts, had expanded from curbside service to now taking appointments for people to do in-person shopping. 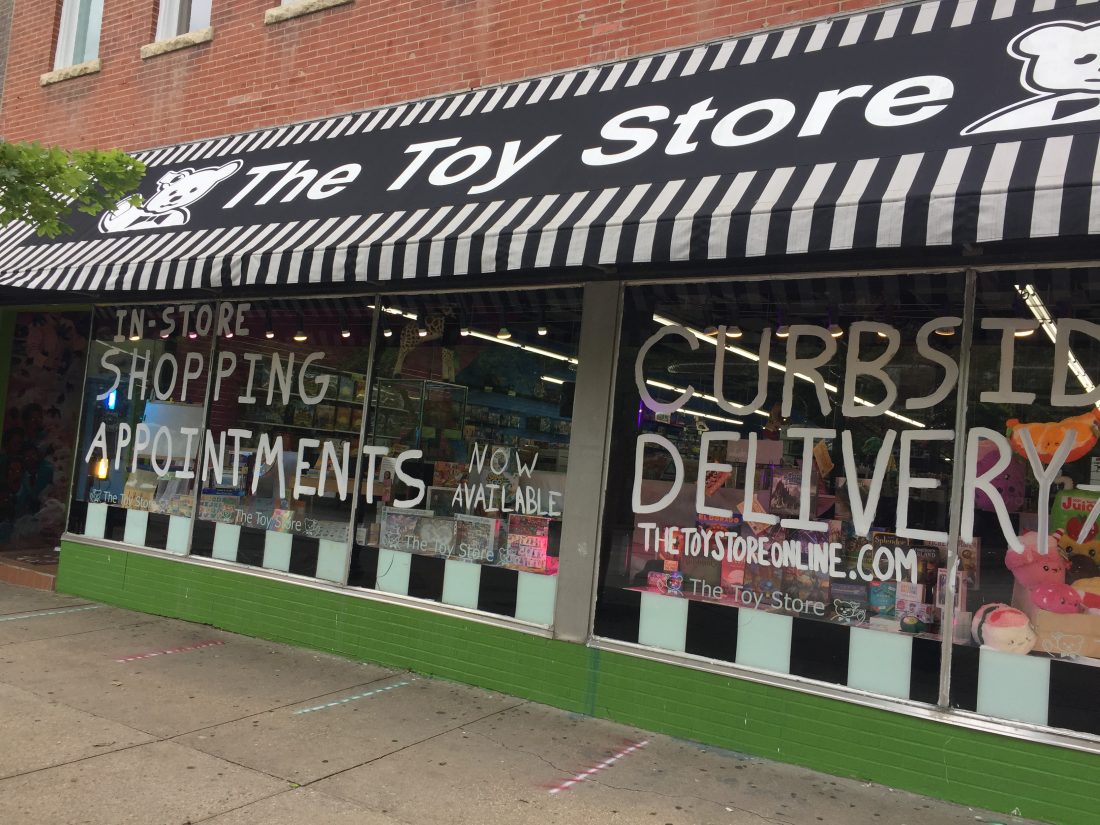 Some businesses kept their front doors locked on Monday, but were offering the new service of appointment shopping for those customers who still wanted to walk the showroom floor.

Some business owners were on site, but not yet open. Morgan Fellers, owner of Eccentricity at 716 Massachusetts, said she plans to open her boutique on Tuesday, although only from noon to 4 p.m.

She doesn’t expect business to be great.

“I think people will be pretty cautious for awhile,” Fellers said.

But, even if the cash registers aren’t ringing much, there are other reasons to get the reopening process started. Some of them have to do with lifting the spirits of the owner.

“I felt like it is what we needed to do,” Fellers said. “I need that little bit of normalcy back, even if it is just for a few hours a day.” 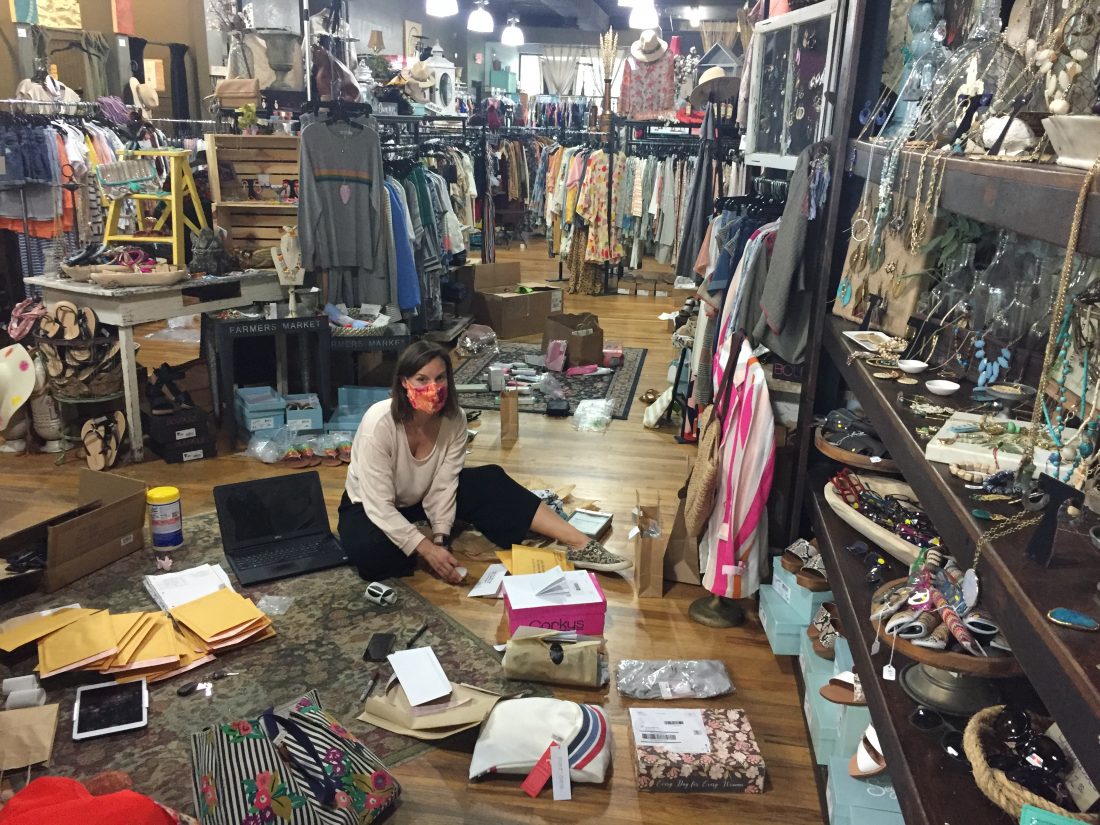 Morgan Fellers, owner of Eccentricity, plans to open her downtown Lawrence boutique on Tuesday, May 5. On Monday, Fellers was filling orders that would be delivered later that day. She said the boutique during the pandemic has had a steady stream of delivery business, which has been a new service for the business.

A few signs or other business owners indicated they also were planning to reopen tomorrow, including Jock’s Nitch sportswear at 826 Massachusetts and Delaney & Loew Kitchenalia at 732 Massachusetts.

Kelly Corcoran at Love Garden Sounds, 822 Massachusetts, said he plans to reopen his used record shop on either Thursday or Friday. He said he’s still assessing the comfort level of his employees, and also is working on getting the right protocols in place.

“The rule will be masks are mandatory,” Corcoran said. “We are trying to find a charming way to say that, but the rule will be you have to wear a mask to come in here.”

Other businesses also had some restrictions in place, though most were not requiring that masks be worn. Several were self-imposing occupancy limits. Sally’s Beauty Supply in the Pine Ridge Plaza, had a limit of 8 people in the store at once. Au Marche was limiting its shop to four customers at a time. The state has a 10-person limit on gatherings, but that doesn’t mean stores have to limit customer sizes to 10 or less. Rather, that is the top size for a gathering that isn’t able to adhere to social distancing guidelines. Stores that have enough room for people to stay at least six feet apart can have more than 10 people.

Some businesses also were requiring people to use hand sanitizer before entering the store. Ad Astra Running, 734 Massachusetts, was one of those businesses and also had a sign near the front door offering another piece of advice.

The next test for the Lawrence retail market probably will be this weekend, as more stores may reopen by then. May 18 also could be a big day, as that is the date restaurants in Douglas County tentatively are scheduled to resume in-person dining. 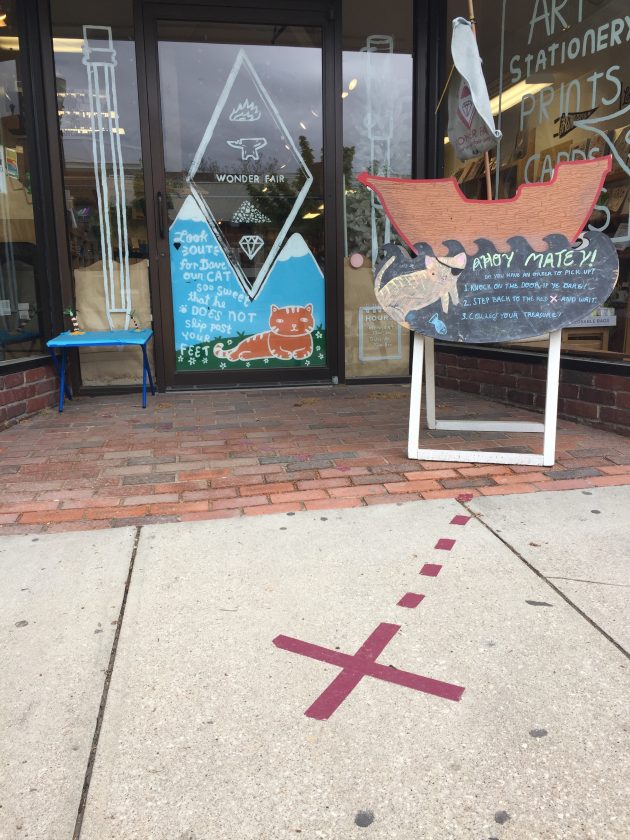 Some stores were providing specific instructions on how customers should interact with the business. The art and stationery store Wonder Fair even drew an ‘X’ on the sidewalk where people should stand while waiting for their item to be brought to them.

• One quick piece of news impacting the nonprofit industry. Tuesday — as in tomorrow, May 5 has been designated as Giving Tuesday Now.

The national nonprofit Giving Tuesday usually hosts a day-of-giving campaign the Tuesday after Thanksgiving. But, due to the strain COVID-19 is placing on social services and nonprofits, the group has added a new day to its calendar.

People don’t have to go through the Giving Tuesday nonprofit to donate. People can give money to the nonprofit of their choice, or they can choose to give in ways that aren’t measured in money. That can be donating time or advocating for a cause, the group’s website suggests.

Locally, the Ballard Center has been working to spread the word about the new philanthropic effort. Becky Price, executive director of the Ballard Center, said she knows many of the community’s social service agencies are facing significant strain.

“We do Zoom calls together,” Price said of the nonprofits. “There is some crying on those calls, and a lot of stories. It has just been really hard for so many.”