Spring Parade of Homes goes to a virtual format this year; builders talk about pandemic impacts 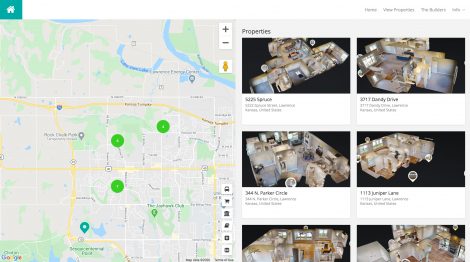 photo by: Screenshot/Lawrence Parade of Homes

Lawrence Spring Parade of Homes will be held in a virtual format in May 2020 because of the coronavirus pandemic.

I know what the prominent style changes have been in my quarantine-era home: claw marks on the inside of the front door and the elimination of all full-length mirrors. (Wear pants, people.) Normally, though, I’m getting up to date on new housing styles at the Lawrence Spring Parade of Homes. The event — originally scheduled for last weekend and this weekend — is still giving home-lovers a peek at new construction, but it is now in a virtual format.

The parade’s organizer, the Lawrence Association of Homebuilders, is using special video technology that lets the user control a 360-degree view and allows for movements throughout the house and beyond.

“It really is almost like you are walking through the house,” said Bobbie Flory, executive director of the association. “You can even go outside and see the neighborhood.”

People can take part in the virtual parade by going to lawrenceparade.com. The website includes virtual tours of 16 homes, with prices ranging from $295,000 to just less than $795,000.

Users have a couple of ways to take a virtual tour of a home. They can simply hit the play button on a video and watch a fairly traditional video walk-through of the home. Or users can click on a special icon which allows the user to control the pace of the walk-through and direct the route.

If you have ever used the walking person feature on Google Maps, you are familiar with the technology. Some home shoppers also already may be familiar with the system, as some real estate agencies use it. Flory said the industry had been trending to more virtual tours even before the pandemic, but she thinks the stay-at-home order will accelerate the trend in Lawrence.

She said a new type of normal was starting to emerge with potential homebuyers. First, they tour a home on their own using one of these virtual tours. Then they arrange for a second tour with a real estate agent via Facetime or Zoom technology, then if they are serious about buying the house, they do an actual walk-through.

“I think this is something that is going to stay with us,” Flory said of the trend of buyers being a little bit more distanced.

A more pressing question may be what the homes market will look like in the near term. I just recently got statistics for March home sales. I’ll detail them at a later time, but they were healthy. Lawrence was off to a fast start to the spring home-buying season. But April has been a different story from everything I’ve been told.

“We don’t know what is going to happen, but it is very concerning what we are seeing right now,” Flory said.

Paul Nuzum, owner of Nuzum Homes L.C., said “showings have been basically nonexistent.” Construction work on homes, however, has continued. State and local restrictions have not required construction activity to halt. Nuzum, though, said construction was happening at a slower pace because most residential builders were limiting the number of people who could be on a job site at the same time.

“It can be a scheduling challenge,” Nuzum said.

The houses under construction now are ones that were started before the pandemic hit the economy. Whether builders will start new homes in the summer is an open question in the industry. With unemployment totals at historic highs, there are worries about how many buyers will be in the market.

“I’m just going to try to keep my eyes open and evaluate as it goes,” Nuzum said. “We all are learning on the fly here.”

As for this year’s homes on the tour, there’s a mix of styles and sizes. Dominant trends continue to be similar to the past few years, where big kitchen islands and open floor plans are popular.

While scars from the pandemic may change architecture in America in some ways — office cubicles could change, and restaurants may value drive-thrus more than ever — it is unclear that the pandemic will change how homes are designed.

Nuzum, for instance, said he didn’t think families would give up on the open floor plan, even though more walls might help with quarantining a family member.

Perhaps more likely is rethinking how cities and neighborhoods are designed in general. There has been a big push nationally, and somewhat in Lawrence, to build more densely. Flory, who has followed local planning issues for decades in Lawrence, wonders whether the pandemic will cause a pause in that drive for more density.

“It is interesting how our circumstances may turn those desires on end,” Flory said.

Nuzum said he was not expecting the idea of density to lose favor in Lawrence. Rather, he said some people may be inclined to look for a home in rural Douglas County.

“But I don’t think there will be a big change in how the City of Lawrence or civil designers lay out neighborhoods,” Nuzum said.

In the meantime, homebuilders are hoping people take time to look at a few homes on a screen. Since the tour is virtual, people will have more time to see the houses. The website will be active for several more weeks.

“Maybe it can provide a little bit of entertainment for people who can’t get out much,” Nuzum said.