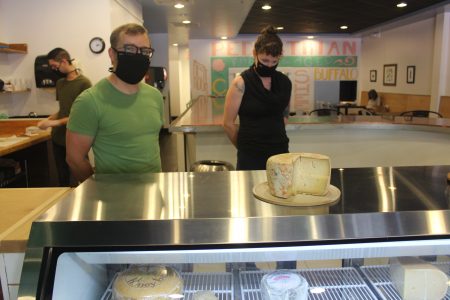 David and Holly Heitmann explain one of the shop's featured cheeses to a visitor. The shop at 845 Massachusetts St. sells cheese to go and several items for dine-in service.

The phrase “say cheese” has ruined many a photo. Rather than smile, I bolt to get a flask of wine and a bag of tortilla chips (just in case it turns into a nacho party.) If cheese also excites you, there is a new shop in downtown Lawrence to take note of.

Pedestrian Cheese has opened at 845 Massachusetts St. — the former home to Luckyberry — in recent weeks. Patrons have multiple ways to enjoy cheese from the shop. They can buy it by the pound, buy a curated cheese tray to eat at home or in the store, or they can order any number of sandwiches that feature cheese.

Owners Holly and and David Heitmann, wife and husband, are hoping area residents get into the idea of trying cheese in many different ways. That’s one of the benefits of a small, locally owned cheese shop, Holly said.

“You can go to a lot of places and get interesting cheese, but often it is in larger quantities,” Holly said. “I think that is the most fun aspect of having a local cheese shop. You can try it a little at a time.” 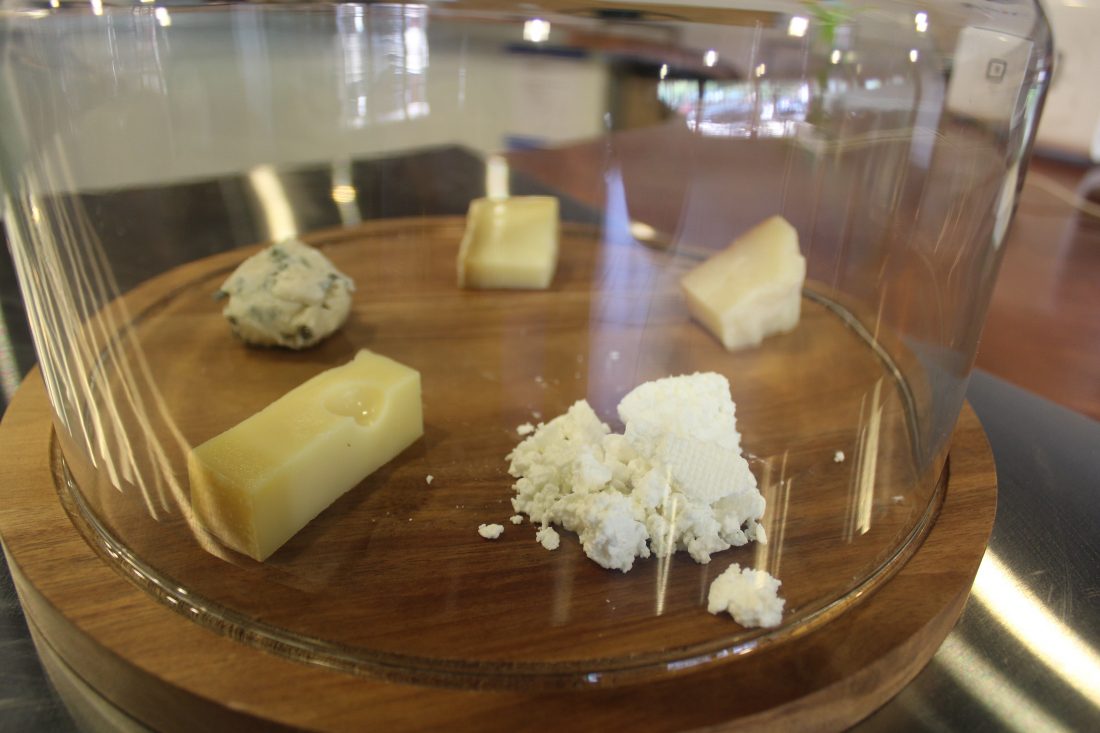 Pedestrian Cheese currently is offering a mix of both regional cheeses — including some from Kansas, Missouri and Iowa — plus more traditional European varieties.

Right now, the cheese counter is a mix of creations from near and far. The shop currently features two cheeses from Missouri, one from Iowa, and a Kansas cheese called Cottonwood Cheddar from Wiebe Dairy in Durham. Plus, there are classic European cheeses, including a French cow milk cheese from Burgundy, a Gorgonzola from Italy, and Emmental, which is billed as the original Swiss cheese full of holes.

Expect more cheeses in the near future as the shop builds up its connections, particularly in the U.S. cheese world.

“There is only so much sourcing that can happen through large distributors,” Holly said. “We are reaching out to specific creameries and buying directly.”

If you are partial to the combination of wine and cheese, the shop can oblige. Pedestrian Cheese has its liquor license. The shop plans to have five wines on tap, plus a selection of bottled offerings.

Maybe you are more of a Wisconsin cheese-eater, which I think requires you to wear a foam cheesehead hat and engage in arguments about the best way to cook a brat. That’s a cheese exercise that usually involves beer, and the shop can handle that, too. David is a former employee of Free State Brewing Co. He’ll make sure that the shop is stocked with beer. Current plans call for five beer taps plus various bottled brands.

As for menu items, the shop offers about a half dozen sandwiches that Holly said are kept intentionally straightforward.

“I think our whole focus when it comes to food is simply things of really good quality,” said Holly, who has worked in local and area restaurants for the last 15 years. We are not reinventing the wheel. We are doing a lot of classics.”

Of course, that includes a grilled cheese. It features the Kansas-produced Cottonwood Cheddar and a “bloomy rind” cheese. But Holly said the shop’s muffuletta — which has a vegetarian version featuring roasted eggplant and peppers — and the Reuben sandwich have been some of the more popular offerings. Holly said the Reuben features corned beef that is made in house, plus the high-quality Swiss cheese.

The shop also has devoted a corner of its space to another type of service: a small market that sells a few essentials for people who perhaps live downtown and don’t want to travel elsewhere for an item or two. Right now the shelves have everything from toilet paper to ketchup and mustard to oatmeal.

Currently, the shop is open Wednesday through Sunday from 10 a.m. to 6 p.m., but Holly said the business likely would add a true dinner service to the mix in the next week or so. 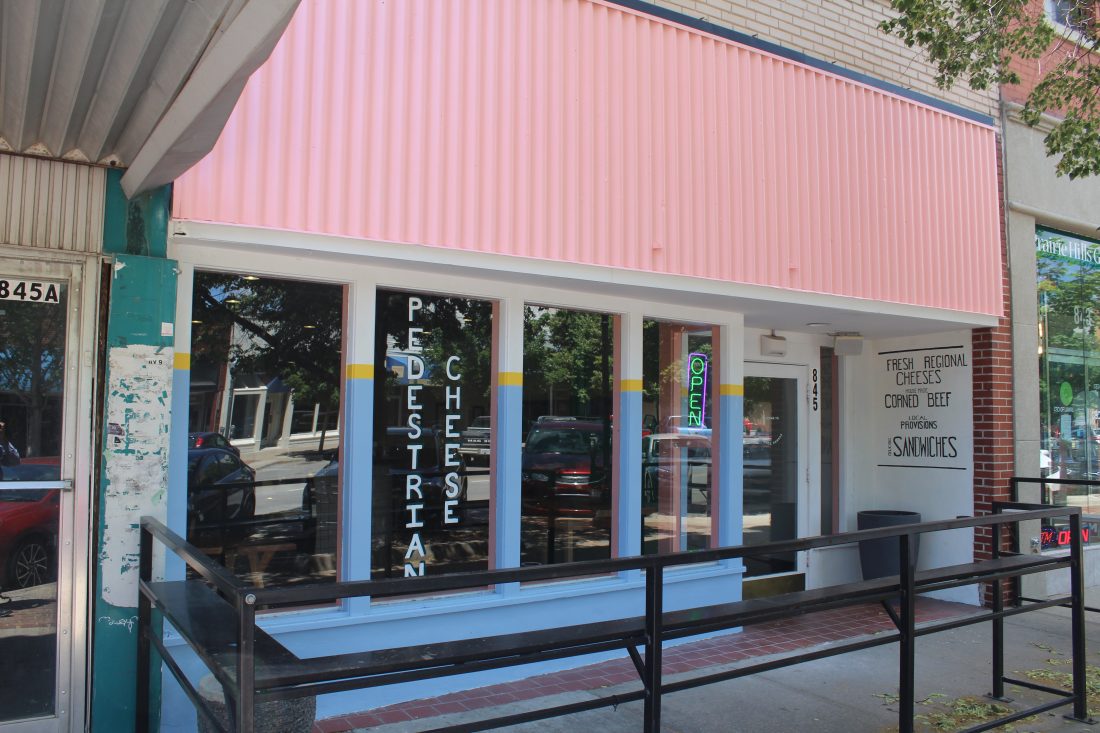 Pedestrian Cheese is located at 845 Massachusetts St. in the building that formerly housed Luckyberry and before that Penny Annie’s Sweet Shop.