photo by: Olivia Lawhorn/Special to the Journal-World

The Big Pig grilled cheese sandwich, which includes ham and pulled pork, is served with a cup of tomato basil soup at Cheesy Street inside Lawrence's Lucia Beer Garden & Grill in downtown Lawrence.

This Town Talk column appeared in the Jan. 22, 2020, edition of the Journal-World’s Crave food supplement. More from that section, including interviews with Lawrence restaurateurs, can be found here.

I’m definitely not a restaurant critic, and I’ve found it is dangerous to be a food critic. (The things that can be done with a turkey baster when you tell the chef the bird is a bit dry …) But writing about restaurants is one of my favorite tasks.

One of the reasons why is because I almost always peruse the menu and find something that sounds delicious, unique or just plain weird. So, for the Journal-World’s first attempt at a special section highlighting the area’s restaurant industry, I thought it would be fun to look back at some of those 2019 finds.

But, before I do that, a word about this section. Lawrence seems to love restaurants. They’ve become a part of our identity, in some ways, and certainly a major part of our entertainment scene. With that in mind, we wanted to do something that gave readers a bit more of an extended look at Lawrence restaurant industry. In this section, you can see interviews with four restaurant owners or chefs. Hopefully, you’ll also take time to look at the ads and learn something about a handful of restaurants too. This is our first effort at creating a special section for area restaurants. As such, I would enjoy hearing from you about what you hope future sections may include. Reach out to me at clawhorn@ljworld.com

Enough with the appetizers, though. Let’s get to the main dish. Here are 15 restaurant items that caught my eye in 2019:

As the parent of kids who raise 4-H hogs, I’ve had a pork belly put me in a jam before. (I still don’t know how that hog ended up behind the wheel of a demo derby car.) But I like the sound of Cheesy Street’s pork belly jam much better. The new grilled cheese restaurant inside Lucia Beer Garden & Grill serves pork belly jam as part of its Big Pig grilled cheese sandwich. In addition to the jam — which has some coffee, brown sugar, pork belly and other ingredients — the sandwich comes with ham, hickory smoked bacon, melted cheese and artisan sourdough.

A doughnut shop next to my high school would have been more dangerous than even the Bunsen burner in the chemistry lab. But doughnuts have arrived virtually next door to Free State High School. Humble Donut Co. has opened inside Orange Leaf Frozen Yogurt, 4801 Bauer Farm Drive. The shop has a unique system that makes mini-doughnuts to order. A unique one on the menu is the s’mores doughnut. It has chocolate icing topped with graham cracker, chocolate chips and marshmallow drizzle. No campfire is used, but maybe a Bunsen burner? 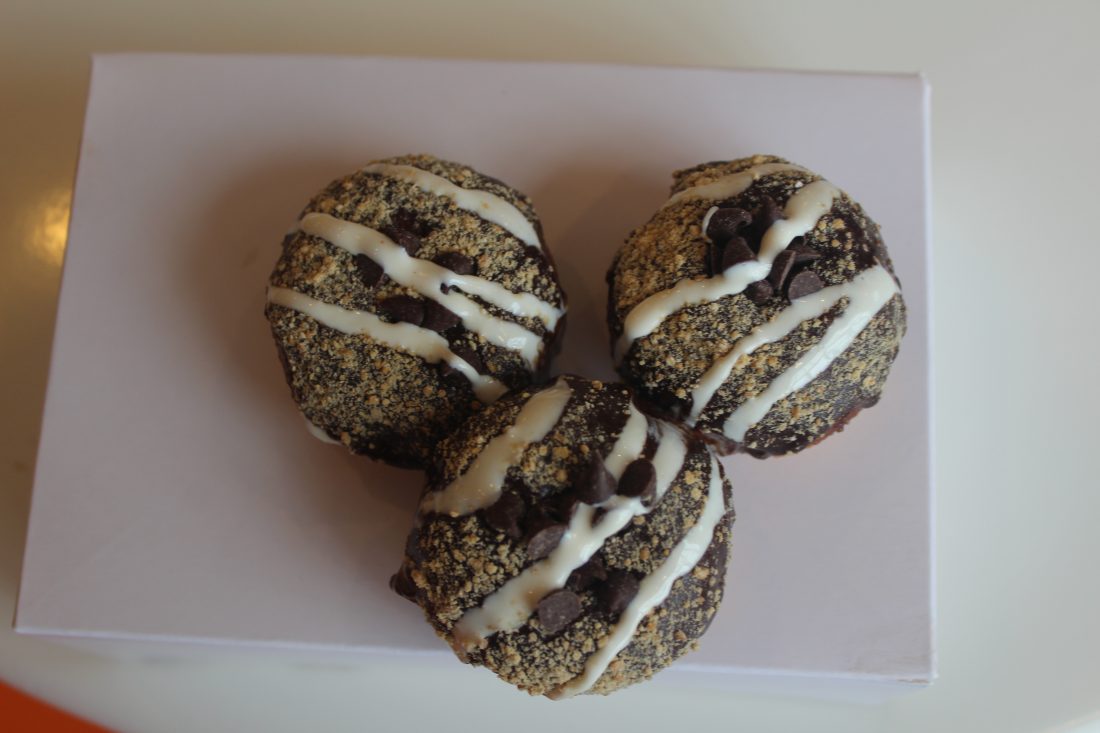 photo by: Olivia Lawhorn/Special to the Journal-World

S’mores doughnuts are served at the Humble Donut Co. inside the Orange Leaf Frozen Yogurt store near Sixth Street and Wakarusa Drive.

Lawrence Beer Company opened a new restaurant at 4811 Bob Billings Parkway to complement its large brewpub in East Lawrence. The west side location is smaller and has a menu that is more handheld. I would like to hold this one in one hand and the steering wheel of a ’55-T-Bird in the other, although I’d better get plastic seat covers to prevent the mess. Maybe I’ll just focus on the sandwich. The Thunderbird Burger has a house-ground chicken patty, cherry pepper mayonnaise and mustard slaw, among other ingredients.

Ta Co. owner Jay Draskovich, of Drasko’s Food Truck and Catering, told me the restaurant’s seven-layer bean dip is a pretty good example of what the restaurant is aiming for — fun and approachable but a bit gourmet. It uses homemade refried beans, plus black olives, guacamole, sour cream, pico de gallo and other ingredients.

You have one less Hy-Vee store to go to in Lawrence, but the remaining location at Kasold and Clinton Parkway is going to have some new restaurant offerings. Look for a Mia Pizza to locate in the store this year. Think thin-crust pizza that is made right in front of you like at a Subway counter. An extensive toppings bar lets you come up with a lot of creations. There also has been talk of a hibachi grill going into the store. I’ll keep an ear open for more on that.

Bap is Korean for cooked rice, and a new food truck called the Bap Stop aims to serve a lot of it in Lawrence. As the weather warms, Emily Henry plans to have the food truck open regularly in the parking lot of Scholle Chiropractic near 19th and Massachusetts. Rice bowls will be a big part of the menu. In addition to veggie version, look for one featuring rib-eye and another featuring pork belly.

I will have fries with that — I’m talking about with my burrito, of course. It is a thing at Pancho’s Mexican Food, 1618 W. 23rd St. The fast-food Mexican restaurant has french fries all over its menu, but particularly inside its burritos. Look for the Mar y Tierra, which features shrimp, steak, rice, guacamole and fries.

If you have read the column at all this year, you know I’ve done everything but rent a blimp to try to get Casey’s and its breakfast pizza in Lawrence. In August, Casey’s opened its first store in Lawrence at 1703 W. Sixth St. Yes, a second is still planned just west of 31st and Iowa. And, yes, I’ve eaten the breakfast pizza a few times — a layer of scrambled eggs with cheese sauce instead of tomato and toppings like bacon and sausage. Soon, I’ll be doing a good impersonation of a blimp.

Sure, Mama’s Tamale Shop, 602 W. Ninth St., has all sorts of homemade tamales, tacos and empanadas, but particularly unique are sweet tamales. Instead of red or green sauces, they are topped with items like whipped cream, cherry sweet milk, cinnamon sugar and caramel. The menu includes: sweet pineapple, which includes dark and golden raisins; coconut and almond; cinnamon and pecan; and a chocolate berry variety featuring both cranberries and raspberries. 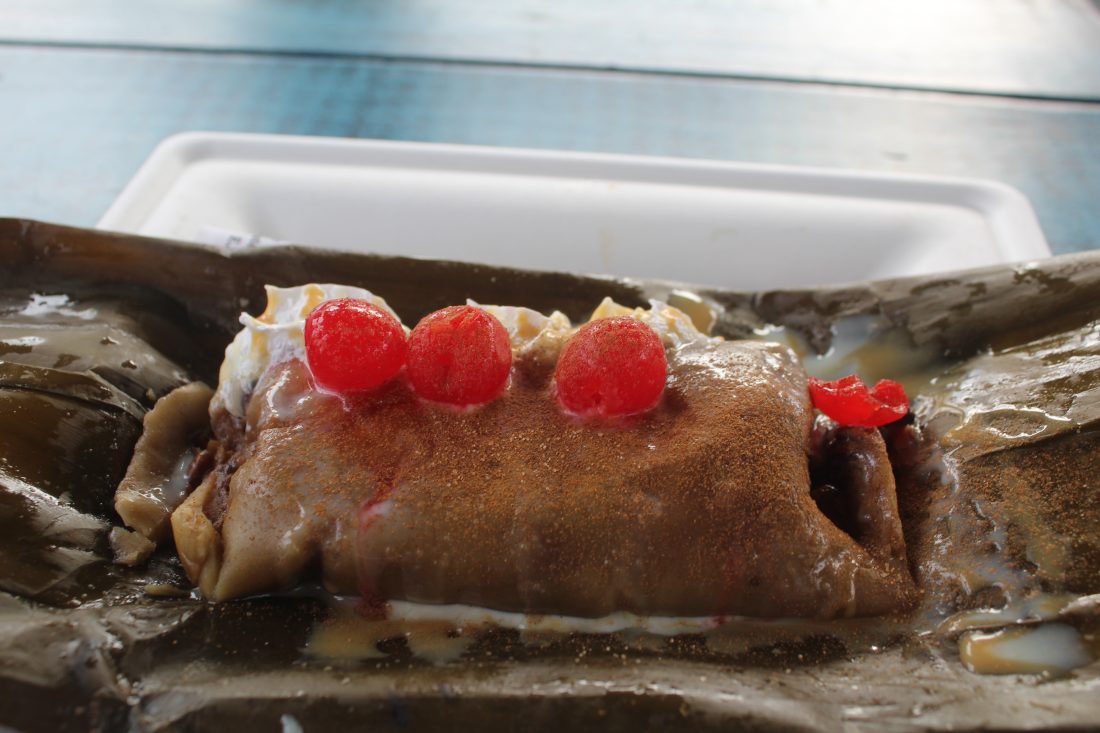 In addition to traditional meat and vegetable-filled tamales, the menu at Mama’s Tamale Shop, 602 W. Ninth Street, includes sweet tamales. Above is a caramel apple version.

Down South in Hell Sandwich

My cheating ways on board game night have led some to say I’m heading to Hades. Now, it looks like I have a sandwich for the trip, and also a restaurant where I can play board games. Lawrence’s RPG — short for “Restaurant, Pub and Games” — has more than 1,000 board games at its location at 724 Massachusetts St. It also has the Down South in Hell Sandwich on its menu. It features smoked pulled pork, fried chicken breast, bacon gravy, a fried egg, pickled jalapeño, Texas toast and a shot of hot sauce.

No, a chef isn’t serving up the popular Star Wars character on a platter. That would be infeasible. The cook time would be insane. Rather, C3PO is one of the beer offerings at Black Stag Brewery. The name is a play on some of the flavors in the beer — chocolate, cherry and chipotle — while the P stands for the porter style of beer. Co-owner Kathryn Myers told me the brew definitely has a chipotle aftertaste and pairs well with steak. Someone else told me to drink it while wearing a Darth Vader mask, but I think that was someone who just doesn’t like my face.

Yes, you’ve stumbled into the acronym portion of the tour. Dempsey’s Burger Pub isn’t new, but does have new owners. Brothers Tom and Pete Sorrentino bought the restaurant at 623 Vermont St. from longtime owner Steve Gaudreau. The brothers gave the restaurant a remodel and refresh but kept the menu pretty much the same. The Thai P.B.B. burger is one of the more popular with Thai peanut sauce, pineapple chutney cilantro, bacon and Sriracha aioli.

You don’t have to convince me to add mashed potatoes to a dish. Nate Keller, owner of PoorBoy Burrito Co., 1900 Massachusetts St., told me mashed potatoes are the key to his breakfast burritos. A layer of the potatoes helps hold the cheese, eggs and other ingredients together. “Everybody thinks it’s goofy until they try it,” he said.

Ondori opened as a noodle shop that also planned to serve some Chinese street food in early 2019. The restaurant at 1008 Massachusetts St. has changed its menu a bit since I last talked to the owners. It looks like kabobs are now a big part of the offerings, including quail egg kabobs. I don’t know how it works either, and I’ve got five empty egg cartons to prove that it doesn’t replicate well with chicken eggs. 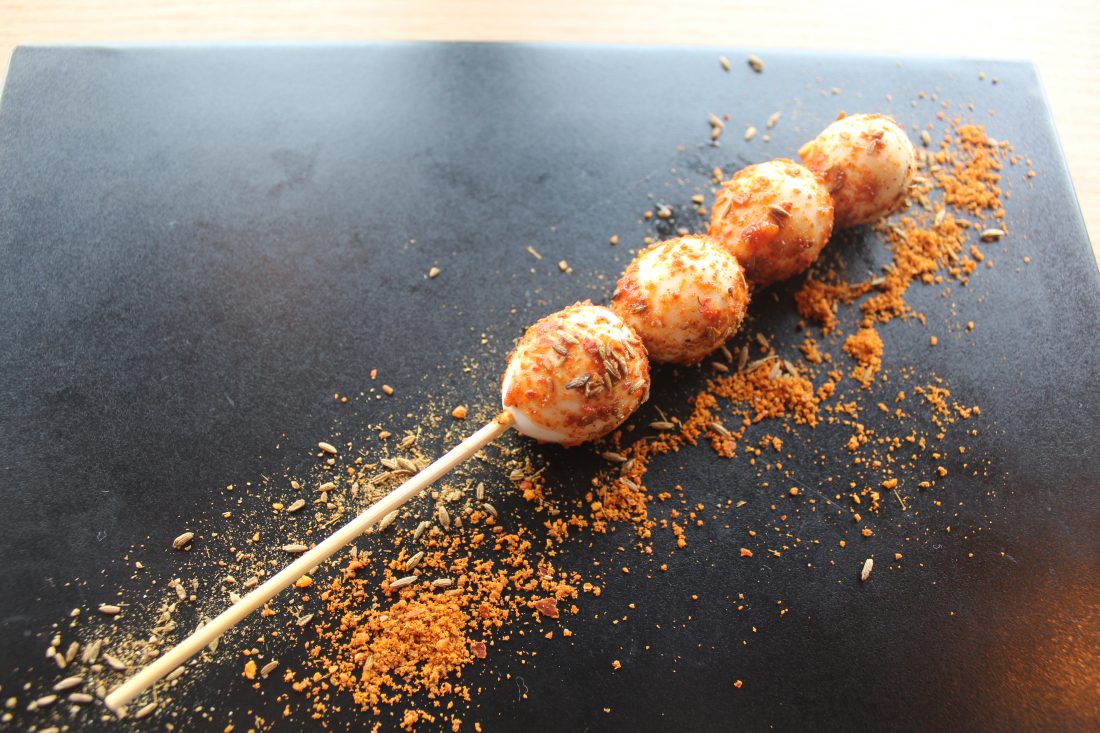 A skewer of quail eggs is on the menu at the Asian fusion restaurant Ondori at 1008 Massachusetts Street.

Twisted Fresh, 4931 W. Sixth St., takes pride in not having a deep fat fryer anywhere in its restaurant. Restaurant founder and owner Alan Rust said the idea behind Twisted Fresh is just to serve a “healthier version of everything.” Wraps and bowls are a big part of the menu, but so too are fish tacos. The restaurant has a mahi mahi taco that features a Cajun version of the fish, along with pico de gallo and a honey Sriracha aioli.

Let’s end with that one because less deep fat fried food sounds like a good resolution for 2020. Well, at least for you. I have professional obligations, you know. Here’s looking forward to a fun food year in 2020.

Lied Center’s 2020-2021 season to include America, Rosanne Cash, “Charlie and the Chocolate Factory” and more