A new retail paint store has filed plans to locate on one of the last available retail lots in the Bauer Farm development, which is near Sixth Street and Wakarusa Drive. The proposed lot is shown above where the "for sale" sign is located. The site is next to the Sprouts grocery and across the street from Theatre Lawrence.

Plans have been filed to fill one of the last remaining retail lots in the Bauer Farm shopping center near Sixth Street and Wakarusa Drive. But don’t look for the vacant lot across the street from Theatre Lawrence to be another entertainment or food destination. Instead, plans call for a retail paint store to locate on the site. (Perfect. I’m too tired to paint the town red after a night at the theater, but I’ll buy a pint of red in case I feel more spirited after a good nap.)

Denver-based Wall Development Group has signed a contract to purchase the vacant lot just west of the roundabout at Bauer Farm Drive and Champion Lane. The roundabout is basically in front of Theatre Lawrence. The paint store will be at the northwest corner of the circle. (My geometry teacher is highlighting that sentence to justify some of the grades he gave me.)

In the plans filed with City Hall, Wall Development Group doesn’t provide additional details about what type of retail paint store it is bringing to town. But, based on multiple websites, Wall is listed as a major partner of the Sherwin-Williams brand of paint store. So, if you forced me to guess, that’s the brand I would pick. Lawrence already has one Sherwin-Williams store, near 27th and Iowa streets. Whether this would be a second location or a relocation, I don’t know. Again, it hasn’t yet been announced that it is a Sherwin-Williams.

It makes some sense to have a home services store in the area, as northwest Lawrence has been the fastest growing residential area of the city for awhile now. But a paint store is different from what was planned for the area.

That center-stage property originally was planned to house a two-story, 12,000-square-foot retail and office building that could house multiple tenants. But the new plans scrap that idea and instead propose to build a single 4,500-square-foot building for just the paint store.

Back when Bauer Farm was proposed in 2006, it was envisioned as a new urbanism project that promoted a walkable neighborhood with shops and other destinations. While the development did attract Theatre Lawrence and some sweet shops and sit-down restaurants, it also is home to more than a half-dozen drive-thru establishments and hasn’t exactly taken on that small downtown feel.

The development group, led by Lawrence businessmen Doug Compton and Mike Treanor, brought the project online just as the Great Recession was starting to take hold. Local commercial real estate agent Lance Johnson, who is now marketing the development, said the downturn caused the plans to change as prospects were looking for more traditional development opportunities.

But there are still two large lots left to develop in the project, and Johnson said he was excited about the possibilities. He said multiple parties have been interested in the vacant property at the corner of Sixth Street and Folks Road. At one time, the plans show that corner housing a bank, but Johnson said residential developers have shown strong interest recently. He said options ranged from apartments to senior housing to some duplex-style construction.

An even larger piece of property, though, is available just east of the Theatre Lawrence building. That seven-acre site long has been slated to be one of the major neighborhoods for the development. Johnson said he continues to market the property for residential uses. He thinks the area could help the development fulfill some of its potential as a pedestrian-oriented neighborhood. He noted that a lot of walkable destinations are in or near the neighborhood, including a grocery store, multiple restaurants, the theater and the major recreation complex at Rock Chalk Park, which is about two miles away. For households with kids, the property is basically across the street from Free State High School. For people who want to age in place or live next to a parent or older family member, the property is next door to the Meadowlark Estates Retirement Living Center.

“The city has talked about tiny houses and smaller lots and zero lot line development,” said Johnson, referring to several ideas that have emerged as part of the community’s affordable housing discussion. “You could get pretty creative with that seven acres.”

The property currently is approved for some of that denser development or zero lot line type of structures, such as row houses. The approved plans currently would allow for a mix of row houses, duplexes and a few single-family homes. As currently designed, the seven acres could accommodate almost 70 living units. 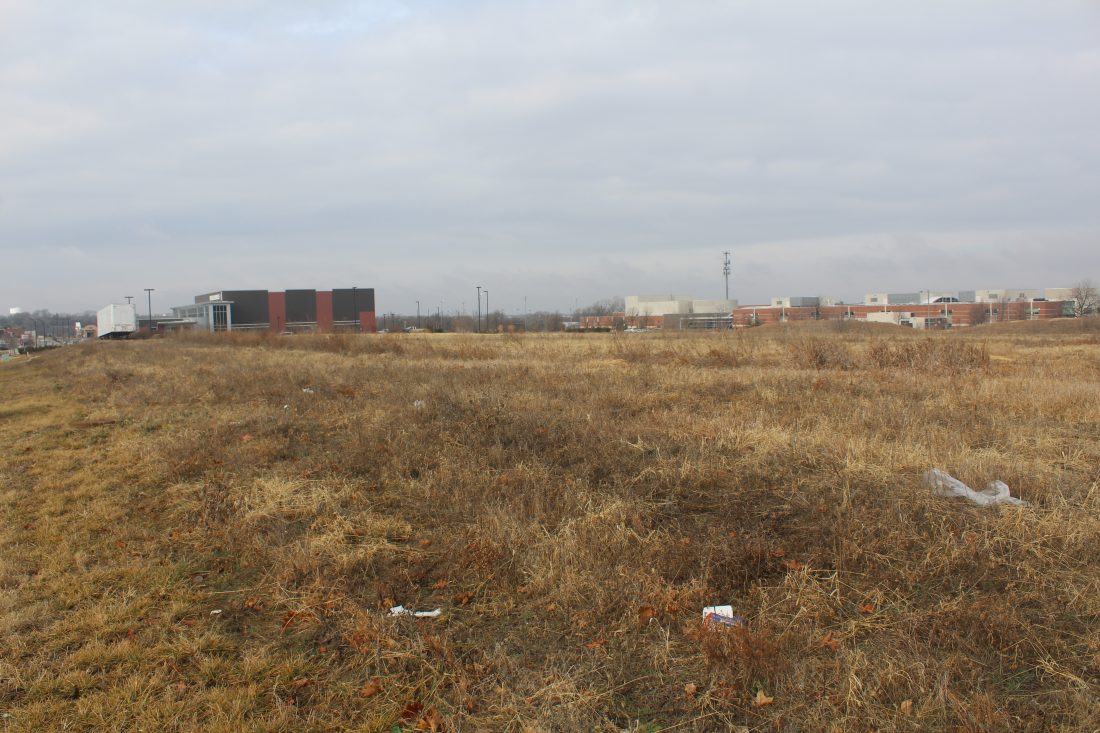 An approximately 7-acre lot in Bauer Farms could house a significant number of new homes or apartments in the northwest Lawrence development. The lot, shown above, is next to Theatre Lawrence and across the street from Free State High school.

Johnson, though, said future developers also could ask the city to modify the approved development plans, which is the process being used to accommodate the retail paint store.

As for that project, expect it to begin in the spring, if the city approves the plans. Johnson said he didn’t know when the other two lots may see development but said interest levels have picked up.

“This project has taken time, but we’re really starting to see it grow up,” Johnson said of the entire development, which in recent years has added a hotel, a bank, a pet supply store and a few smaller retailers. “It has been fun to see some of the recent activity out there.”