Dirt work has begun for an office/warehouse building that will be built a bit east of the 23rd Street and O'Connell Road intersection. The building, which will feature five to 10 office spaces that include a shop or warehouse space, will be near the Tractor Supply store, which can be seen in the background.

It can be lonely on a tractor. (Ask my prom date. No one was there to roll out the red carpet for us.) The folks at Tractor Supply Co. on the far east edge of Lawrence understand that lonely feeling. The store was built in 2010 near 23rd Street and O’Connell Road, and it was presumed that more retail development would follow. Now, construction has started on the lot next door, but it is not an exciting new retail project.

Plans have been filed at City Hall for a small-scale office and warehouse project just south of Tractor Supply Co. Large piles of dirt are on the site now, as excavation crews are preparing the site for what potentially could be two buildings that will be constructed on the property.

I don’t have a ton of details about what types of companies will locate on the site. The plans filed at City Hall list Jim Bruce of Lawrence-based Allen Contracting Inc. as a representative of the owner of the property. Officials with Allen Contracting, however, didn’t return phone calls seeking comment.

But according to the plans on file, crews will build an approximately 18,000-square-foot building as part of phase 1 of the development of the property. The plans indicate that the building could be subdivided into five to 10 smaller spaces for companies, with each suite devoting about a third of the space for offices and about two-thirds for warehouse and shop space. So, think about the type of service businesses and contractors that can benefit from some shop and storage space. Indeed, Allen Contracting is listed on the plans as taking one of the suites. The plans don’t list any other tenants.

The plans also call for a phase 2 that would build another 18,000-square-foot building on the site that also could be subdivided into smaller spaces. One feature that you don’t always see in office/warehouse projects is a bunch of carports. Plans call for 13 covered carports to be built along the eastern edge of the property as part of phase 1. Another nine covered carports would be built as part of phase 2.

Here are a couple of line drawings included in the plans on file at City Hall to give you an idea of how the building may look. 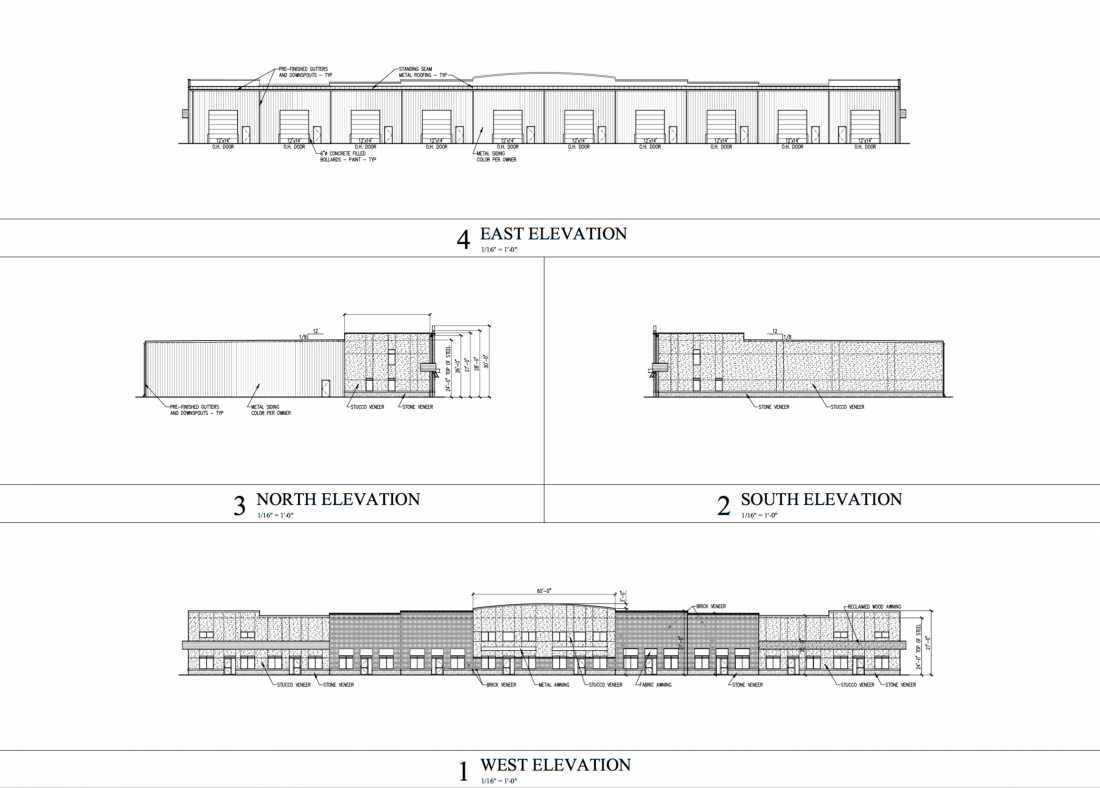 photo by: Photo courtesy of City of Lawrence as submitted by Phelps Engineering Inc.

Renderings show the proposed design of a planned warehouse and office building at 2450 Fairfield St., which is just south of the Tractor Supply store in eastern Lawrence.

Folks hoping for news of new retail development near 23rd and O’Connell will have to keep hoping. As we’ve reported, the property around Tractor Supply Co. has changed hands a few times since the original development was built. The largest tract at the intersection — once hoped to be a site for a grocery store — is owned by a group that includes the leaders of the Lawrence Kia dealership. A member of that group told me several months ago a car dealership at the site is possible, but nothing is imminent.

Lawrence businessman Roger Johnson owns several of the smaller lots that have frontage along 23rd Street. There is nothing new to report there either. But Johnson does continue to build more homes in the area, and that may be what is needed to get more retail into the development.

Johnson told me this week that he has opened up 40 new single-family building lots in the neighborhood just south of the Tractor Supply Co. development. That is in addition to the approximately 50 single-family homes that already have been built or are under construction in the new neighborhood. Johnson is marketing the homes as some of the lower-priced newly constructed homes in Lawrence. He said prices were in the $250,000 to $299,000 range. He said demand has been strong. Eventually, he said he also plans to develop duplexes on property that he owns farther east of the single-family neighborhood.

• While I’m talking about activity on the east side of town, I might as well pass along news about one eastside location that will have less of it in the future. Playerz Sports Bar has closed. The bar was in the shopping center at 19th Street and Haskell Avenue. According to a Facebook post from the owners, Dec. 27 was the last day of business for the bar. It had been in business about eight years, according to the business’s Facebook page.

At least two shootings have occurred outside the bar in the shopping center’s parking lot in recent years. The most recent was in November. Terry Dean Scearce III died in November after suffering injuries in connection with a shooting that occurred just after 2 on a Sunday morning in the parking lot. Two other people, a man and a woman, were shot in the parking lot that day but survived their injuries. Scearce was accused of shooting those two people.

The bar also was in the news for a 2016 shooting. One man was shot in the leg just before 2 a.m. as he was reportedly trying to break up a fight in the parking lot outside the bar.

In their Facebook post, the bar’s owners did not address whether the most recent shooting played into their decision to close the bar. Previous Facebook posts had offered prayers for the victims of the November shootings and sent love to “everyone involved — the victims, our staff, and all of the other patrons that were there and had to experience what was probably the scariest event of their lives.”

A couple of doors down from that location, a church has located in the shopping center. Church of the Living God from Topeka has a sign saying it meets at 4 p.m. on Sundays.