A downtown boutique is about to get four times larger, while pushing back against online shopping 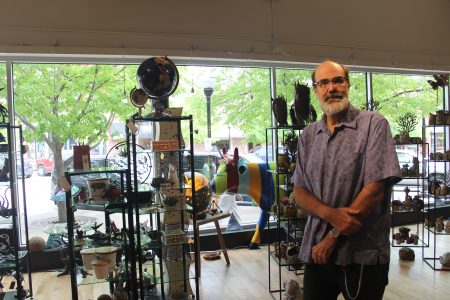 David Jess is preparing to reopen the Striped Cow in a restored and larger location in downtown Lawrence once restrictions are lifted on nonessential retailers.

The downtown Lawrence boutique Striped Cow is getting much bigger. (Join the club. As the saying goes these days, I’ve social distanced from everything but the refrigerator door.) But owner David Jess is betting this is an expansion to get excited about, hopefully even showing how brick-and-mortar retail can compete with online retailers.

As we reported in September, Jess struck a deal to buy the former Buckle building at Eighth and Massachusetts streets. He’s in the process of moving Striped Cow to that location, from its former home at 835 Massachusetts St.

“What we are trying to do is be a nononline store in an online age,” Jess said. “We have gotten into a niche that we have done really well with over the last few years.”

The niche might be best described as “funky,” although there are even different gradients of that category. Jess has owned Third Planet in downtown Lawrence since 1993. That store has a definite funkiness to it, with a niche in what some would describe as the hippie market. Jess doesn’t quite describe it that way, but said the Striped Cow is an evolution of that thinking.

“People have really responded to the uniqueness and funkiness of it,” Jess said. “Striped Cow is kind of an an offshoot of Third Planet, minus the bohemian feel. It is a little more mainstream and high end.”

The new location is about four times larger than the store’s old space. Shoppers should expect a major expansion in the number of silver and gemstone jewelry items. The store will go from two cases of jewelry to about 20 cases of jewelry.

“We just spent several hundred thousand dollars on jewelry in Tucson, and we will have all that on display in the store,” Jess said, noting that ultimately the store would have more than $1 million in jewelry inventory. “Most of them are one of a kind, which is why we don’t do internet sales. Every stone is a little bit different.”

Jess said he’s found that is a key to competing with online retailers: Do something they are not doing.

“Lawrence shoppers are savvy,” he said. “They want something that is hand-selected by us for them. It is a very old-fashioned process in a very modern time.”

Jess said every department of the store — which in addition to the jewelry sells bath products, stationery, purses, candles and many more items — is likely to be expanded. He said men’s grooming products are especially being expanded and will include about 60 product lines.

The previous spot was the location for a high-end barbershop that was one of the few in town that gave hot shaves with a straight razor. But Dan Fitzpatrick, owner of the shop, decided not to make the move to the new space. He told me he’s opening his shop in the back of Mildred’s Coffeehouse in the Crossroads District of Kansas City instead.

Jess, though, said the new shop would have plenty of items to attract male shoppers. In addition to the grooming products, he plans to greatly expand what the industry calls “Everyday Carry” items.

That’s a category that includes pens, pocket knives, wallets, small notebooks and many other items that a man might regularly carry on his person. A distinguishing feature is often that they are high-end products.

“It is the idea that the few things that I do own are nice,” Jess said. “A lot of people like that concept.”

Jess said he was also planning to add a couple of new departments to the store, including some furniture and a clothing line.

“The clothing will be something new for us, and we are just going to go for looks that aren’t well represented in Lawrence,” Jess said. 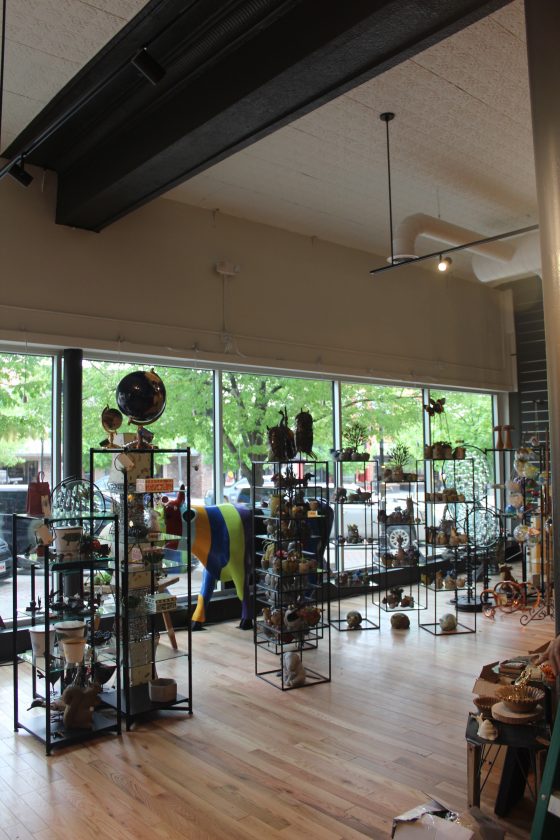 The Striped Cow has moved into the former Buckle space at 805 Massachusetts St.

Jess also thinks a lot of people will come into the store just to see the renovated building. The old 1860s era building previously housed a J.C. Penney and a Ben Franklin store at various points, Jess said.

When the building was occupied by The Buckle, its interior looked like a pretty standard chain store. But Jess tore down two layers of dropped ceilings in the building to find the original pressed tin ceiling and hammered copper around the main ceiling beam. Both have been restored.

“I’ve never owned my own commercial space before,” Jess said. “I’ve been tired of improving other people’s spaces. It was neat to do it exactly the way I wanted to this time.”

Jess hopes to open the new location shortly after the state lifts restrictions on nonessential retailers.