Local unemployment now near 14%, but another COVID chart is encouraging for Douglas County 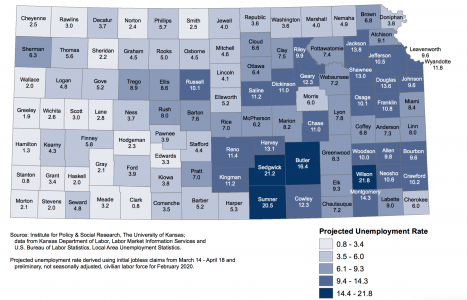 News and notes from around town, with a heavy dose of COVID-19 numbers, and information on a furlough policy that has some Hallmark employees upset.

• The unemployment numbers are still grim for Douglas County, but now we have more company. The latest estimate compiled by researchers at the University of Kansas pegs unemployment in Douglas County at 13.6%. That’s up from 11.3% a week ago, according to the estimates prepared by KU researcher Donna Ginther at KU’s Institute for Policy & Social Research.

When Ginther, who uses data and recent unemployment filings from the Kansas Department of Labor, first started preparing the estimates in early April, Douglas County had the fifth-highest unemployment rate of any county in the state. Now, it has the seventh-highest rate in the state, as high unemployment levels start to creep into more rural areas of Kansas.

This most recent report, which is for the week ending April 18, is the first time during the pandemic that any counties west of Salina have had unemployment rates at 10% or more. Reno County, home to Hutchinson, is at 11.4%, its neighbor Kingman County is at 11.2%, and Russell County is at 10.1%. The unemployment march seems to be heading toward central and western Kansas.

As for Douglas County, it continues to have the second-highest unemployment rate of any urban county in the state. Our sudden loss of university students and the economy’s reliance on a service sector that serves students are probably factors in why our unemployment rates are among the highest in the state. It also is a reminder of how, even by university community standards, our economy is pretty reliant on the university. Riley, home to Kansas State, for instance, is at 9.9% unemployment.

Sedgwick County, home to Wichita and a battered aviation industry, has the highest unemployment rate of any urban county, at 21.2%. Some aviation workers, though, have been called back to work in Wichita. It will be interesting to watch that number in future weeks.

You can see the unemployment rates for all Kansas counties in the map above. Statewide, manufacturing continues to be the industry laying off the largest number of employees, according to Kansas Department of Labor data. 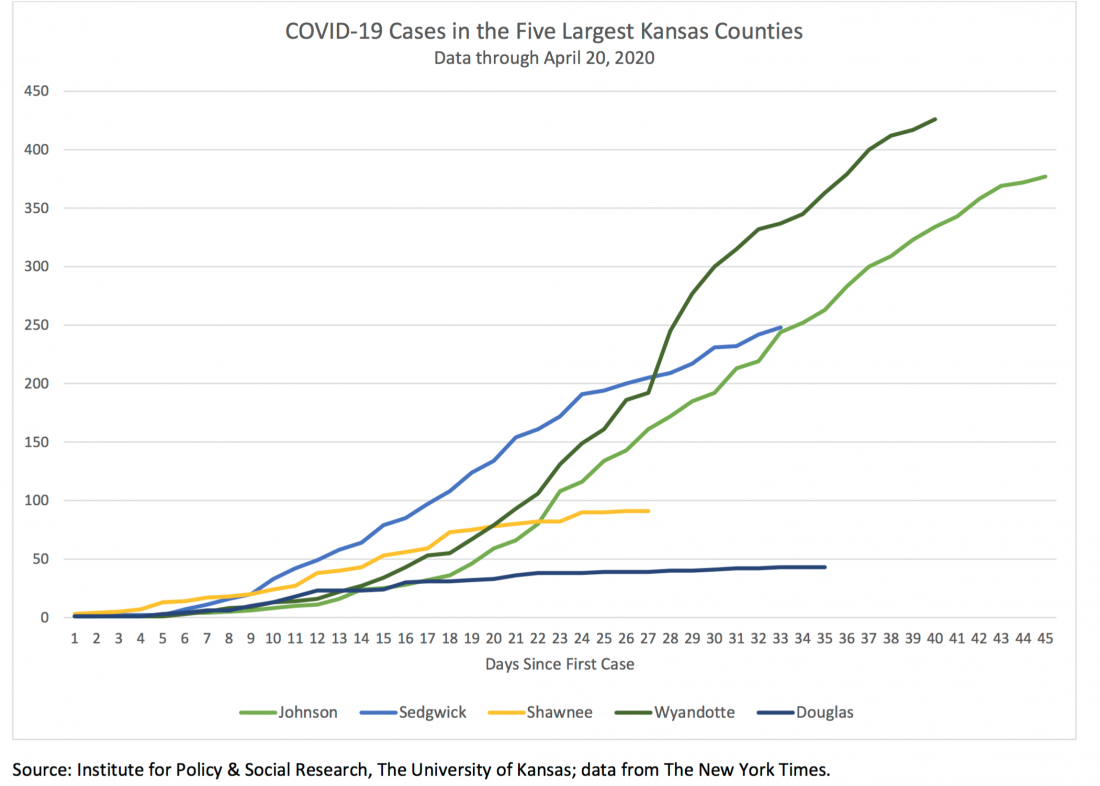 Douglas County trend line of COVID-19 has begun to flatten much more so than other urban counties in Kansas, as of mid-April.

• This chart shows a lot better news for Douglas County. It tracks the number of cases in the state’s five largest counties.

As we have been reporting day after day, the number of confirmed COVID-19 cases in Douglas County has been rising very slowly. This chart shows not every large county is so fortunate.

The chart doesn’t provide answers to why Douglas County’s curve is much different from others. It could just be that the smaller you are, the easier this is to contain. But certainly it could be that Douglas County’s early effort to put a stay-at-home order in place — it did so before the state — has paid off.

This could be an important chart in figuring out what life looks like in the coming weeks in Douglas County. We need to be rooting for improvements, though, for everybody on the chart. Neighboring Shawnee County is showing signs of flattening. That’s important for Douglas County, given the amount of cross-connections between the two counties. Johnson County, though, hasn’t shown as much of a flattening trend, and that could be problematic for Douglas County, which normally sends tons of commuters that way.

That, of course, isn’t the only difference between the neighboring counties. Wyandotte County is poorer — a poverty rate of about 20% compared with less than 5% in Johnson County — and it has one of the largest black populations in the state.

Combine those numbers with the fact that Wyandotte County’s line on this chart shows little sign of flattening, and that likely means Wyandotte County is of particular concern to health officials currently. 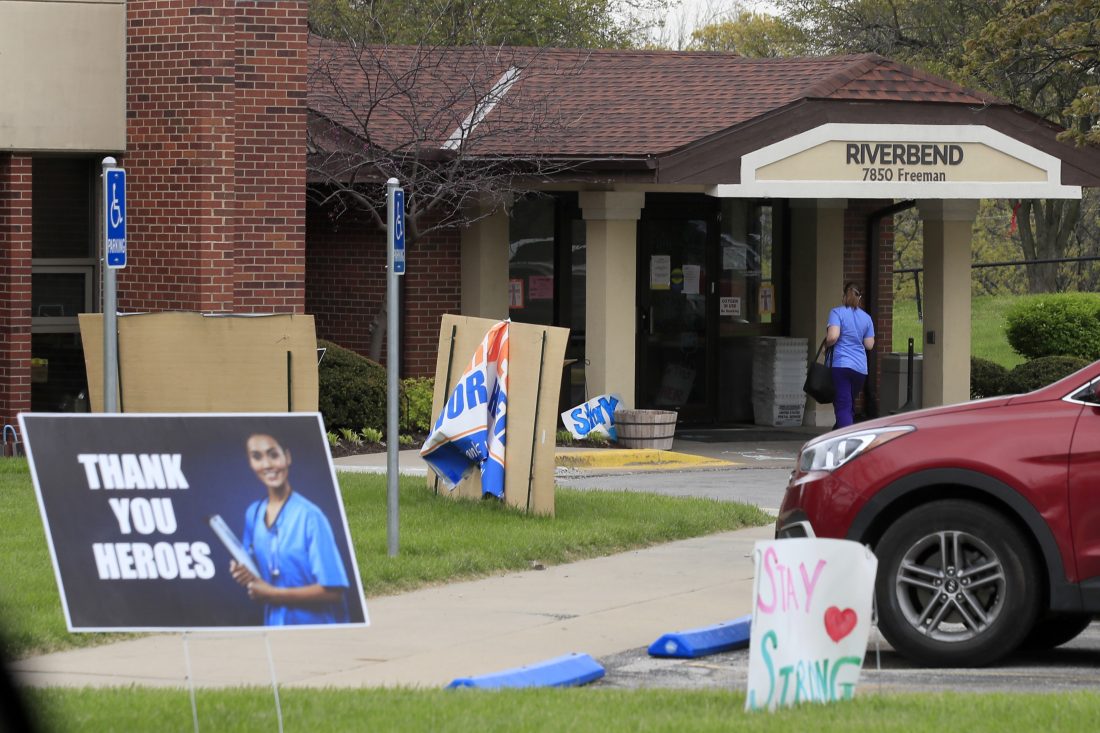 • I’ve had readers ask me about one other statistic that seemingly would be important to Kansas health leaders but is missing from the public data in the state: deaths by age.

The numbers presumably would be useful in helping determine the most vulnerable populations in Kansas. When people say senior citizens are an at-risk population, where does that line begin? Are numbers showing a jump in death rates for people over 65 or only over 75 or some other number?

Thus far, the public has had access to some national numbers but no Kansas ones. A KDHE spokeswoman on Friday morning told me that will change. After the Journal-World inquired about the lack of data, KDHE spokeswoman Kristi Zears said the state was working on adding it to its public website.

“We are working to include more data on our site for the death statistics, including age and gender,” Zears said. “Our concern has previously been to not release information that would be considered identifying.” 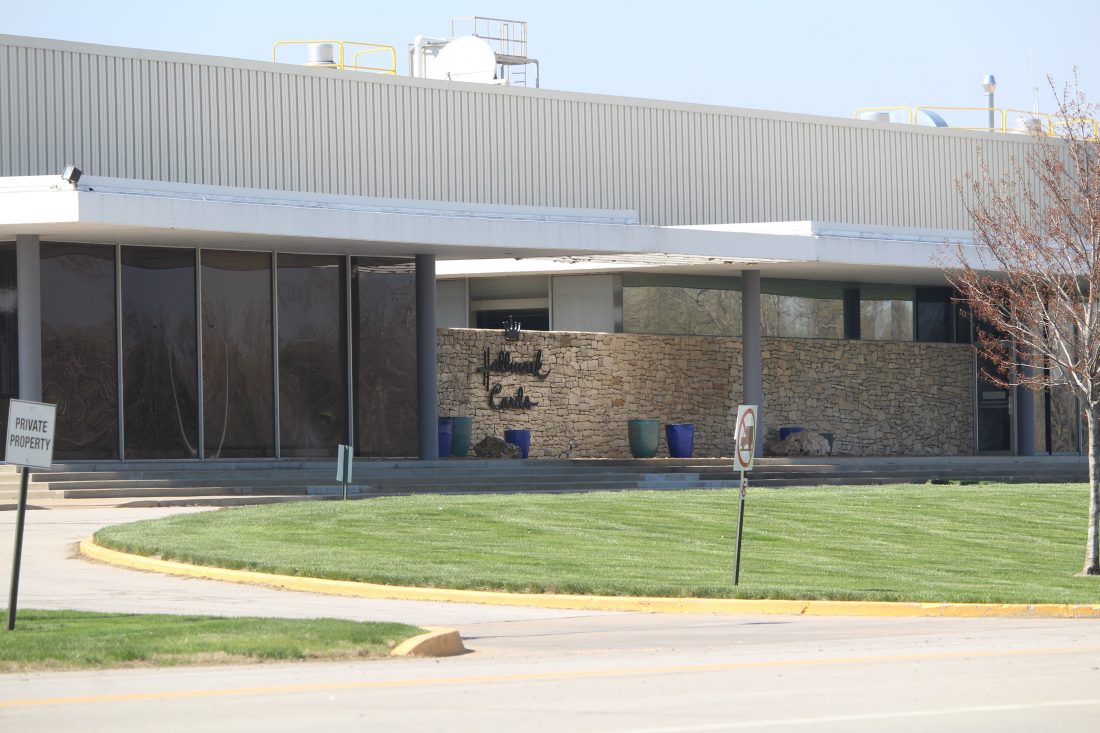 • On the topic of questions from readers, I’ve gotten a lot from employees of the local Hallmark production plant. As we’ve reported, the greeting card plant that employs more than 800 people in town has been temporarily closed during the pandemic.

That has created some confusion, as we’ve reported several times that Kansas law does not require furloughed employees to use all of their paid time off before becoming eligible for unemployment. That is accurate. But it also is accurate that employers can have their own policies that require employees to use all their paid time off prior to filing for unemployment, according to a spokeswoman from the Kansas Department of Labor.

“Under the Kansas Employment Security Law, there is no requirement that anyone utilize their vacation time or other paid time in order to be eligible for unemployment insurance benefits,” Julie Menghini, communications and legislative director for the department of labor, said.  “However, an employer may have a policy requiring employees to use their leave time.  If an employer is paying an employee vacation or other paid time off, those earnings will be considered wages and may render the employee ineligible for unemployment insurance benefits.”

I didn’t ask Menghini specifically about Hallmark, but rather just asked for a general definition of what is allowed. However, I did ask a Hallmark spokeswoman why the Kansas City, Mo.-based company was requiring employees to take paid leave time before being eligible for unemployment.

Spokeswoman JiaoJiao Shen said in an email response that Hallmark employees had been given two additional weeks of paid leave that coincided with the plant closure in late March. She also said Hallmark employees, even those on unemployment, remain on the company’s medical, dental and vision plans, and that Hallmark is paying full premiums for those benefits.

“These actions are to to keep Hallmarkers paid and eligible for Hallmark benefits for as long as we can,” Shen said.

Several employees, who did not wish to be named, have expressed concern to me that Hallmark’s paid leave policy is one that makes no distinction between vacation days and sick days. Thus, when the plant reopens, lots of employees won’t have any sick leave. Employees think that could be problematic, given the health guidance that people stay home if they feel sick.

“When it is appropriate for employees to return from furlough and an employee needs time off and does not have sufficient PTO to cover the absence, they are to work with their manager,” Shen said.

As for reopening the Lawrence Hallmark plant, Shen did not have a timeline for that to happen. But she said the facility would “reopen in phases with numerous return to work protocols.”