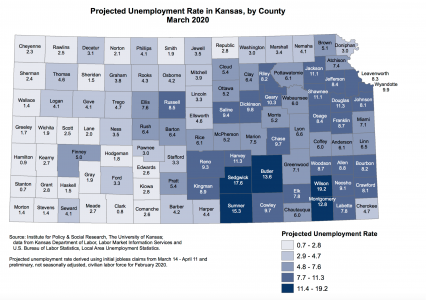 photo by: Courtesy: Institute for Policy & Social Research/University of Kansas

There are no shortages of industries to feel sorry for during this pandemic, but new figures suggest employees in the arts, entertainment and recreation sector may be the hardest hit in Kansas thus far.

That industry includes everybody from actors — which probably make up a small percentage in Kansas — to fitness trainers, which is one of the larger employee groups in the industry. Also included are professional musicians, movie theater attendants, museum employees, amusement park operators, casino workers and many others.

The findings come from calculations made possible by new data from the state’s March labor report, which was released Friday. The report listed the total number of employees in Kansas for each major industry just prior to when the pandemic started shredding jobs in the state. Combining that data with the weekly unemployment claims data allows for number crunching that shows which industries have the highest unemployment rates currently.

To be fair, the unemployment numbers for that industry and every other one in the state could be underreported because many people are having trouble filing unemployment claims due to massive technology problems with the state’s unemployment system. But they are the numbers we have to work with.

Here’s a look at the math for other industries:

• Other services (barbers and hairdressers are the most common occupation in this group, followed by mechanics): 51,500 workers, 11,291 unemployed, 21.9% unemployment rate;

There are many other categories in the state, but these are the ones I’ve been tracking for the last few weeks.

There are actual researchers, though, who are doing this exercise and others. Donna Ginther, director of the Institute for Policy & Social Research at the University of Kansas, has been calculating the unemployment rates by county because that data is slow to emerge from the state. I reported on her estimates earlier this week, when she projected Douglas County’s unemployment rate already was at 9.4%, making it the second-highest of any urban county in the state.

She has updated those numbers based on the latest unemployment filings. She now projects Douglas County’s unemployment rate is 11.3%. That continues to be the second-highest among any urban county in the state. Sedgwick County, home to Wichita and the battered aviation industry, has the highest rate of any urban county at 17.6%. Sedgwick County, though, has been overtaken by Wilson County — home to Neodesha, which has a strong manufacturing industry, including the headquarters for Cobalt Boats. Wilson County now has unemployment of 19.2%.

Overall, Douglas County has the sixth-highest unemployment rate out of the state’s 105 counties. That is a sign of how hard university communities are getting hit by the virus, although Riley County — home to Kansas State University — hasn’t yet seen its unemployment rates rise quite so high. Its unemployment rate is 8.2%, perhaps helped by the fact that many of its residents continue to work at the nearby Fort Riley Army base.

You can see the full list of counties in the graphic above.

As for an official unemployment rate for Kansas, the state released one on Friday, but it is meaningless. That’s because the March labor report was data only through March 12, which was about a week before the virus started affecting jobs. Thus, the state’s numbers show an unemployment rate of just 3.1% for March, which state officials readily acknowledged is nowhere close to the current situation.

We probably won’t get a more meaningful number from the state until late May.