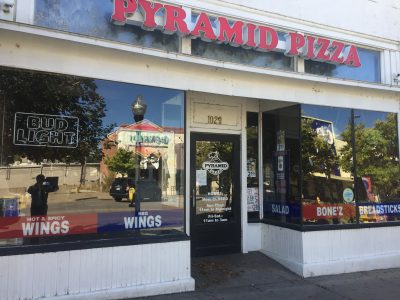 A sign on the door says Pyramid Pizza at 1029 Massachusetts Street has closed. The pizza place dates back to the late 1970s or early 1980s in Lawrence.

As the guy who got to deliver a Pyramid Pizza to comedian Bob Hope, Mark McKee is a bit more bummed about the closing of the longtime Lawrence pizza restaurant than the rest of us. He’s also the guy who might be able to do something about it.

As we reported earlier this week, Pyramid Pizza at 1029 Massachusetts St. seemingly has closed after more than 30 years in business. A sign on the door says the restaurant has closed and thanks folks for the memories.

Few people have more Pyramid memories than McKee, so I reached out to him. McKee is often credited with being the founder of Pyramid Pizza, though he told me he actually bought the business when it was two or three years old in 1981. McKee was a sophomore at KU, at the time.

Despite selling the business about 20 years ago, McKee told me he still owns the Pyramid Pizza name. News of the closing, which he was unaware of, has gotten the wheels of the Kansas City area resident spinning. He told me he is intrigued by whether there is an opportunity to open a new version of Pyramid Pizza.

“We don’t want to see the brand go away, so we are going to have discussions,” he said. “It has been around too long and means too much to us to see it just go away.”

McKee said he thinks the Pyramid brand still has a good reputation in Lawrence, and he would love to see it get some of its funky swagger back.

“We always just tried to be a little bit different,” McKee said.

How so? Well, Bob Hope is an example. First, for those of you under 40, Bob Hope is a legendary comedian, although he’s been drawing smaller crowds since 2003, when he died. But back in October 1982, he drew about 5,200 people to Allen Fieldhouse.

One of the 5,200 people was McKee. He came with a hot Pyramid pizza and was intent on delivering it to Hope, even though Hope hadn’t ordered it. He said the security guard at the fieldhouse that night was a fellow student. He liked Pyramid pizza and waved McKee right through to the stage level.

“I got about 40 yards from the stage, and Hope laughed and pointed and said ‘Hey, it is the pizza boy,'” McKee recalled this week.

So, McKee kept on walking, came on stage and gave Hope the pizza.

“He didn’t miss a beat,” McKee said. “He made a couple of jokes about pizza and everybody thought it was part of the show.”

I couldn’t confirm that story through the news accounts of the show that I read, but maybe some of you who were at the show that night could refer to the notes on your stone tablets and send me a telegram about whether you remember that. (Or just post it in the comments below.)

But it sounds like the sort of crazy thing Pyramid was known for. McKee said one of the restaurant’s regular promotions was to go to KU football games to give away free pizza. No, it wasn’t quite like the drill today where somebody in a lucky seat has a box of pizza delivered to them.

“We would just throw slices of pizza at the crowd,” he said.

McKee went on to grow the business to have Pyramid franchises in other, mostly college towns, including Columbia, Mo., and Manhattan. But the Lawrence Pyramid Pizza was the last one standing, he said.

Who knows if anything will come from McKee’s intrigue over reviving Pyramid Pizza. It is interesting to note, though, that McKee still has a pretty good connection with a celebrity comedian who probably could give the marketing efforts of a new Pyramid Pizza a boost. McKee is the brother-in-law of comedian and actor Rob Riggle. To be clear, McKee didn’t say anything about a Riggle collaboration on a Pyramid Pizza revival, but did tell me he is really fun to have as a brother-in-law.

Again, who knows what the future may hold for Pyramid, but I thought a business of that age deserved a couple more stories before we close the book on it. 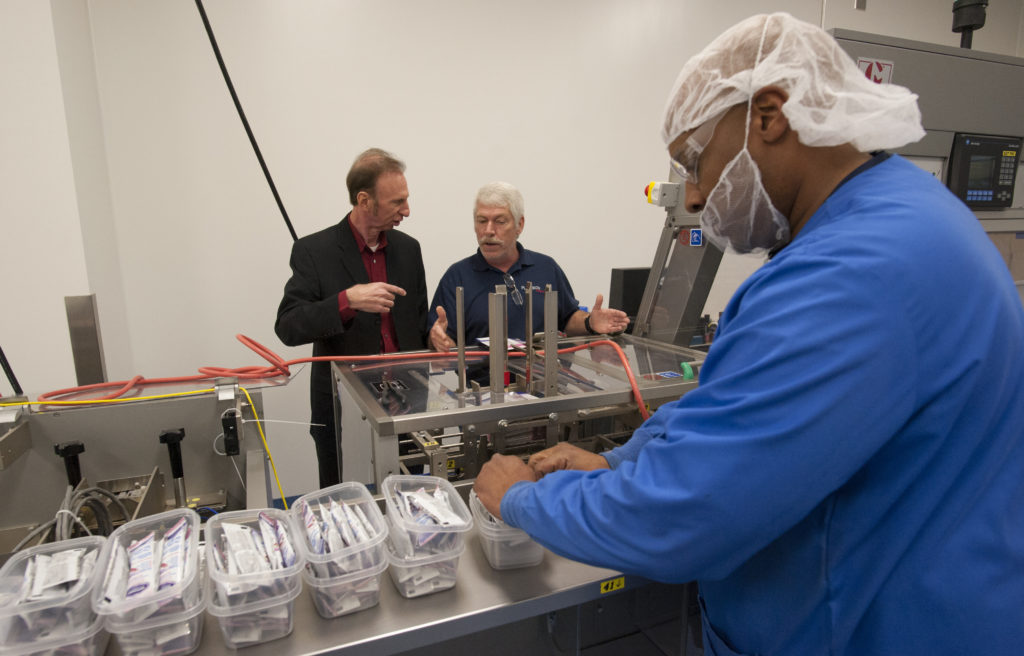 • It looks like we should be keeping our eyes open for a potentially significant expansion at the East Hills Business Park.

Plastikon has filed plans at City Hall for about a $1.2 million expansion of its manufacturing plant in the business park, which is along 23rd Street on the eastern edge of Lawrence.

I’ve got a call into the general manager of the plant to see what it might mean in terms of jobs at the facility. I’ll let you know when I hear back.

But according to the plans at City Hall, the project would add about 17,000 square feet of space onto the plant that currently has about 85,000 square feet of space. The company is in the business of both making plastic containers for the drug industry, and also filling those containers for health care companies, according to the company’s website.

Business has been good in recent years. The company in 2018 completed a 50,000-square-foot addition at the facility, and foreshadowed that other additions could be coming in future phases. Back in 2017 when county officials approved an incentives package for the company that included free land at East Hills Business Park, the company projected the 50,000-square-foot expansion would add between 40 and 60 jobs to the 22 existing jobs at the plant. At that time, company officials said the jobs would pay a minimum of $14 an hour, with most in the $21 to $26 an hour range.

The project is a clear sign that activity has started to pick up in the city’s main industrial park. The biggest news in the area came with the approval earlier this month of a plan for U.S. Engineering Metalworks to build a 100,000-square-foot manufacturing facility in Lawrence VenturePark, which is adjacent to East Hills Business Park. The plant, which will do custom manufacturing work for a variety of heating, cooling and plumbing products, is expected to employ 80 people with an average wage of nearly $73,000, the company has said. It will become the first company to build a plant in VenturePark, and with those wages is one of the more significant economic development wins for the community in years.