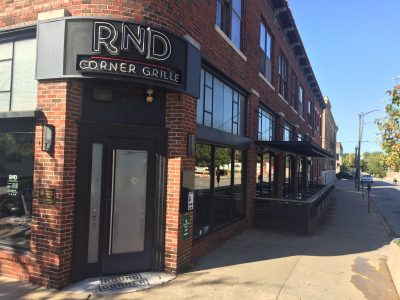 Ta Co., a Mexican restaurant with some Asian influences, will open in the RND Corner Grille location at Eighth and Massachusetts in November.

An upscale restaurant in downtown Lawrence soon will be replaced by one with a comfy couch and a good 7-layer bean dip. Those are the kinds of twists and turns you get when you put a veteran food truck chef in charge of opening a new restaurant.

In November, Ta Co. will be opening in the space at Eighth and Massachusetts streets currently occupied by RND Corner Grille. Jay Draskovich — the chef behind Drasko’s Food Truck and Catering — has joined the ownership group of RND Corner and will be in charge of the new restaurant.

The new restaurant will have a much different menu than RND Corner, and a different vibe, Draskovich said.

At times, some of those margaritas may be served on a couch instead of a table or booth. Part of the remodel, which will begin in October, will involve removing several tables and chairs to make way for a lounge area that will include a couch, comfy chairs, a Mexican chandelier (I’m not sure either, but I once got bean dip on a lamp) and a big screen TV.

The bean dip, which will be one of the restaurant’s appetizers, is a good example of the food philosophy Draskovich is aiming for — fun and approachable but a bit gourmet. The 7-layer bean dip will get its gourmet feel through homemade refried beans, plus other locally sourced ingredients.

As the name suggests, though, tacos will be a big part of the menu. The preliminary menu has a beef short rib taco with arbol chile and pine nut salsa, a marinated shrimp and pork belly taco with pickled scallions and queso fresco, and even a duck confit taco, and a fried avocado taco. The menu also will include a traditional al pastor with either a hard shell or a soft shell.

But there also will be a third shell option at Ta Co., which is the option that turned Draskovich from a food truck chef that specialized in barbecue into a brick-and-mortar restaurant owner. His barbecue food truck had a corner of the menu devoted to something called a puffy taco. It was a taco filled with Korean shredded chicken topped with kimchi soy ginger lime slaw. The taco featured a puffy shell, which simply is a fresh corn tortilla that is deep fried, which causes it to puff up. Draskovich said it became a big hit with the food truck customers.

“They ended up really loving that taco,” he said. “They would kill me if I took it off the menu.”

That got Draskovich thinking that if he ever did open a brick-and-mortar restaurant, maybe tacos are what he should focus on rather than barbecue. Yes, there are an awful lot of restaurants that serve tacos in Lawrence, but you won’t hear very many of them say what Draskovich says: “We are not an authentic Mexican restaurant.”

Instead, he said Ta Co. will have a lot of items on the menu that blend Asian and Latin influences to create something different than your traditional taco, although those will be on the menu too. 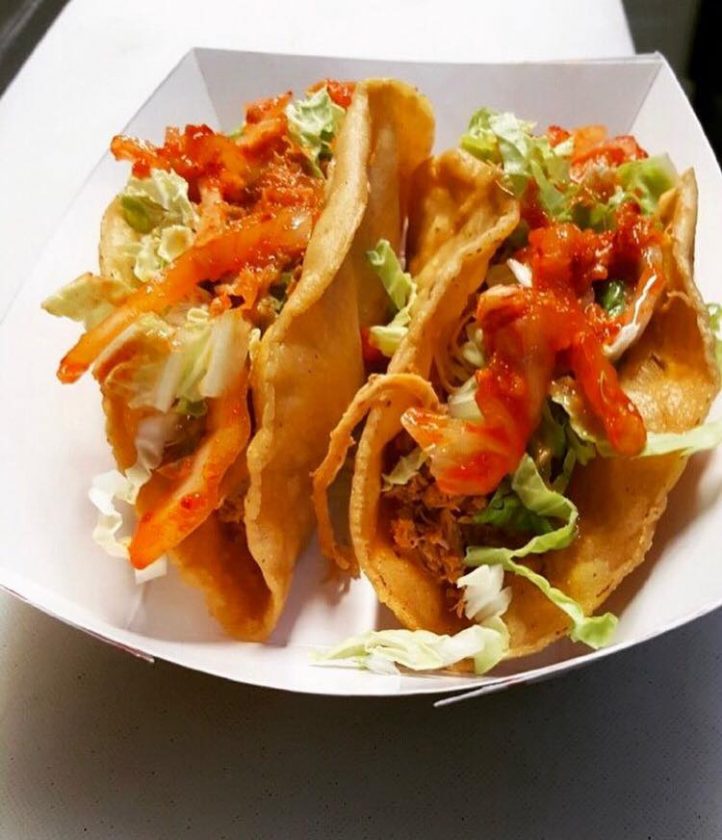 Puffy tacos are a part of Drasko’s Food Truck and Catering, and will be a featured item at Jay Draskovich’s Ta Co. restaurant in downtown. Draskovich said he will put his food truck business on hold later this year while he gets the restaurant open. However, he said he’ll continue to own the food truck and hopes to reopen it for catering events in the future.

The puffy Korean chicken taco is evidence of that blended philosophy, and so too will be a featured appetizer: a mussels dish with cilantro avocado butter in a miso broth. Try finding that next to the salsa at other local restaurants.

Don’t worry, though, Draskovich has figured out the importance of salsa.

“It is the first thing you taste at a Mexican restaurant, so it had better be good,” he said.

He said Ta Co. plans to offer nearly a dozen different salsas, many of them mild but one very hot one that features ghost peppers.

Spice of a different nature is expected to come via the tequila at the restaurant. Draskovich is arranging with a local liquor distributor to have a little-used, high-quality brand of Mexican tequila imported to the restaurant via barrels so that it can be served much like a house wine.

“It will make awesome margaritas,” he said.

But first there is construction work to do at the site. The last day for RND Corner Grille — which opened in late 2015 and serves everything from sandwiches to salmon, steak and pasta — is slated for Oct. 9. Then work will begin to remove much of the dark interior of the restaurant and replace it with bright Latin-themed colors and a funky mural — one part of it has Yoda with a taco and a margarita — by local artist John Sebelius.

Draskovich hopes the restaurant will be open to the public by mid-November.

• It sure looks like a Lawrence pizza institution has closed its doors. All indications are that Pyramid Pizza has gone out of business after more than 30 years of serving pizza in Lawrence. I’ve been keeping an eye on the location for a week or so, and it clearly hasn’t been open. There is now a sign on the door for that says: “Closed. Thank you for all your love and support over the past years. We will miss serving you.”

I don’t have word on what happened to the business that for years had a location closer to the KU campus, beneath the famed college bar The Wheel, until it moved in 1999.

It had a location on Ninth Street near KU, and for some years has been in the far southern part of downtown Lawrence at 1029 Massachusetts St. It was known for its “honey-dipped” crust and speciality pizzas like the King Tut, which was piled high with beef, Italian sausage, Canadian bacon, mushrooms, tomatoes, red onions, black olives, green peppers and extra cheese.

Based on information from the Journal-World’s archives, it looks like Pyramid Pizza opened for business in Lawrence in the late 1970s. Again, I’ll let you know if I hear more information about what happened or whether there is a future for Pyramid. But for now, we’ll use a phrase that I’m sure the mummies use frequently around the pyramid: That’s a wrap. 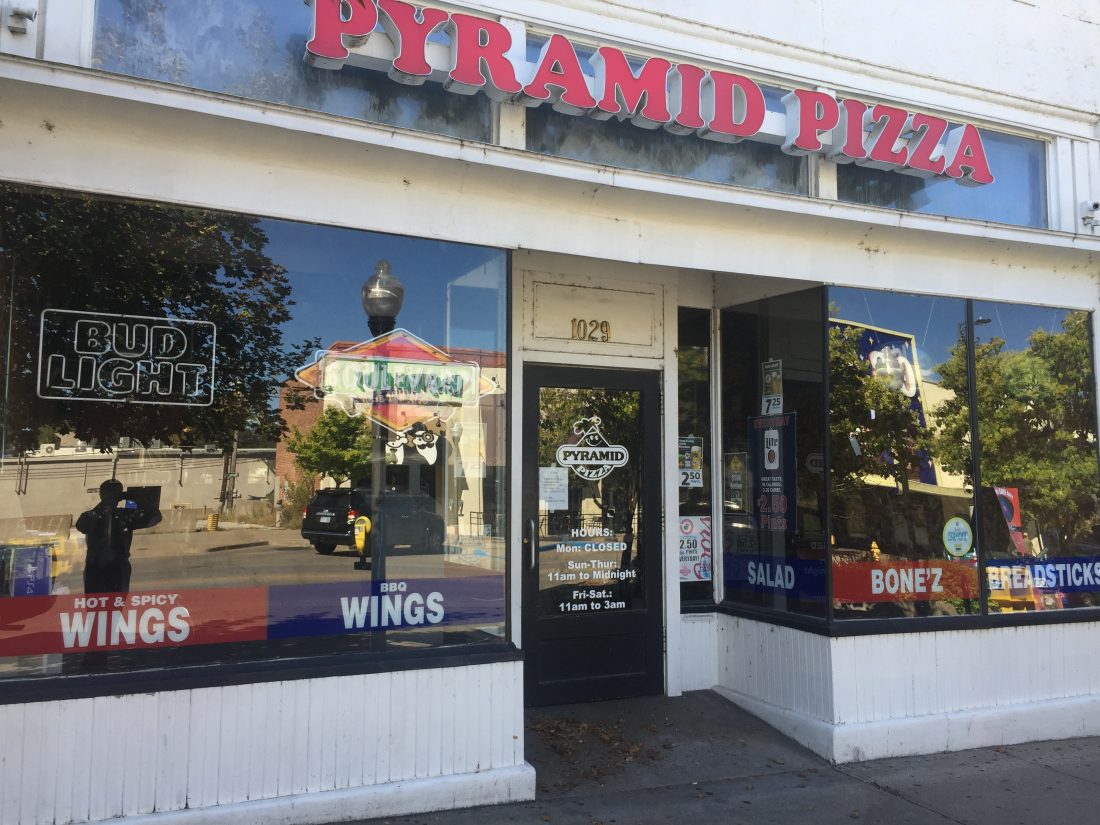 A sign on the door says Pyramid Pizza at 1029 Massachusetts Street has closed. The pizza place dates back to the late 1970s or early 1980s in Lawrence.