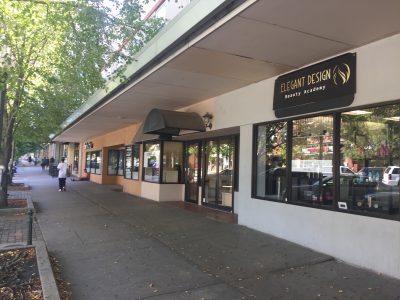 This is the time of year where I sometimes do have luck finding a cheap facial. It is called a Halloween mask. But soon, cheap facials and a whole lot of other spa services, will become a year-round offering at Ninth and Massachusetts streets.

Elegant Design Beauty Academy is hoping to make the center of downtown the center for beauty and spa education in Lawrence. The business is opening a full-service beauty school in the spot that formerly housed the women’s clothing stores Saffees and Envy at 911 Massachusetts St.

Owner Hayley Horne had been teaching in a beauty academy in Kansas City since 2016, and had been part of the industry since 2007, when she began to believe that many beauty schools weren’t providing all that they could. She ended up interviewing more than 200 beauty professionals to get their views on the state of the beauty school industry.

“A lot of it was a lack of instructors,” Horne said. “A lot of people said they felt like they had come out of school basically teaching themselves.”

Horne said Elegant Design Beauty Academy would operate with a policy of having no more than 25 students per instructor. The academy will offer programs in esthetics, manicuring, cosmetology and a special instructor training program, which will allow current licensed professionals to receive the training they need to become instructors.

Eventually, Horne expects Elegant Design to have about 120 students in downtown Lawrence. As part of their training, those students — the ones that have advanced far enough in the program — will start offering a variety of services to the general public. The beauty academy will have 10 stylist stations for hair cuts, coloring and other such services. It also will have four pedicure/manicure areas, six facial beds and a suite in the downstairs portion of the academy that can be rented for bridal parties or other events where groups want to get spa services together.

Horne said the academy generally would offer services to the public for about half the price you would pay at a professional salon. She expects the academy will do a lot of business that way in Lawrence.

“There are a lot of people who love to get a facial but can’t afford to,” Horne said. “For example, we get teenagers all the time who are struggling with their skin, and it becomes a real self-confidence issue. To get a facial for $20 makes it a lot more feasible.”

Elegant Design’s primary business, though, will be training people to enter the beauty industry on their own. Classes range from a $2,400, 350-hour manicuring program to a $7,500, 1500-hour cosmetology program, according to information on the school’s website. The school also will be offering classes to junior and senior high school students in the area.

Horne said the school would have both day and evening sessions, which will allow people to choose to go to school either full or part time. She said that depending on the route people chose, a manicure program could be completed in about three months, while a cosmetology program would take 12 to 18 months.

Horne grew up in the Lawrence area, which was a major reason she decided to open the school here. But she also thinks there is a shortage of training opportunities in the Lawrence area. While there is at least one Lawrence-based school providing training for hair services, she said many people were driving out of town to learn manicuring and esthetics care, which covers a variety of skin care treatments.

She said it would take several weeks for students to advance far enough in their training for the school to begin offering services to the public. She said that by Christmas she expected the school to be open for services.

In other news and notes from downtown:

• The beauty academy will fill one of the larger vacant retail spots in downtown Lawrence. Now, there are signs that another one will be occupied in the coming months. The spot that formerly housed The Buckle at 805 Massachusetts St. has a new owner.

Lawrence businessman Doug Compton has sold the large double storefront space to a group led by Wichita businessman David Jess. In a brief conversation, Jess told me the space definitely would remain retail rather than being converted into a restaurant or some other such use.

But he said it was a little too early to know what specifically would come of the space. Jess is involved in the ownership of the unique downtown retail spots Third Planet and Striped Cow. He said he was interested in using the space to expand Striped Cow or some version of that business, which sells everything from handmade jewelry to bath salts to candles.

“The space we are in right now for the Striped Cow isn’t big enough for us at all,” he said. “We haven’t been able to express ourselves the way we want to.”

But whether he’ll figure out a way to move Striped Cow into that spot is uncertain. He said he now is mainly focused on getting construction crews into the building to make some basic improvements. He said he would probably know more about a tenant for the building in early 2020.