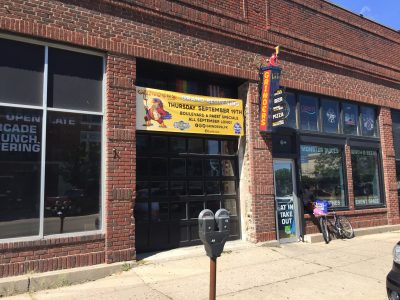 After being closed for about three months, Grinders reopened its Lawrence restaurant on New Hampshire Street in downtown Lawrence. But now it's closing for good.

I can assure you that Olive Garden does not fly its all-you-can eat breadsticks in from Italy. If it did, my table alone would need its own FAA tower. Maybe a flight control tower will be the newest addition to downtown’s skyline, though, because there is a restaurant touting it flies rolls for its Philly cheesesteaks in from Philadelphia.

The restaurant isn’t exactly new. Rather it is revamped and reopened. It is Grinders LFK, which closed its location at 733 New Hampshire Street about three months ago. It reopened this week. The idea of flying in fresh Amoroso Rolls from Philadelphia for the Philly cheesesteak sandwiches also isn’t new. But it was a fact often overlooked because the image of the Kansas City-based restaurant — founded by a hipster K.C. restauranteur who prefers to go simply by the name Stretch — was all about being edgy. Thus, it featured dishes like Trailer Park Tots, Big Ass Fries and LFK in its name.

The new Grinders will have some of those same dishes, but plans to dish out less of the edgy vibe. New general manager Clint Anderson said he thinks the former version probably “missed the mark a bit” on its imaging.

“There is still a slight edge to the place, but overall it is family friendly,” Anderson said. 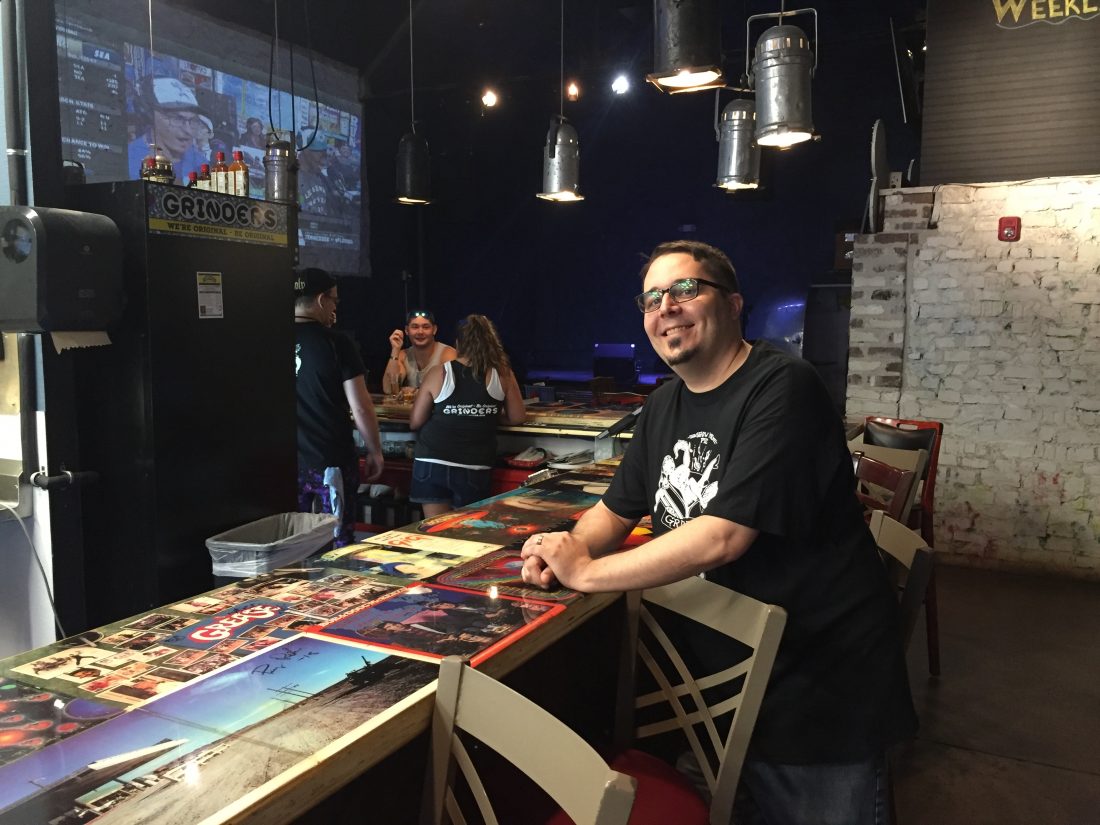 Clint Anderson is the new general manager of the Lawrence Grinders location. He said he’s hired an all-Lawrence management staff, which he said should help give the Kansas City-based restaurant more of a Lawrence feel.

Anderson would be happy enough if people just associated Grinders as a place to get a really good Philly cheesesteak.

“Our bread and butter is still an authentic cheesesteak,” Anderson said.

The bread helps the restaurant lay claim to the “authentic” label. Twice a week a plane from Philadelphia delivers rolls from Amoroso’s — a Philly bakery that dates back to 1904 and supplies many of the restaurants in that city — to the Lawrence and Kansas City Grinders location.

The restaurant also uses ribeye steak rather than some less expensive cuts of meat. For the sake of full disclosure, I should mention Grinders also offers a turkey version. (It seems like that should be illegal, but of course, turkey-eaters say the same thing about my cholesterol levels.)

Then there is the cheese. Anderson said Cheez Whiz is always recommended, but for those people who don’t like their cheese spelled with a ‘z,’ there are other offerings that include provolone or a white American cheese. And, of course, there are the traditional veggies of onions, green peppers and mushrooms.

Another geographic-based dish is a mainstay on the Grinders menu — New York style pizza. Anderson said the restaurant serves a thin-crust style pizza that aims to be authentic to the New York traditions, if that’s what you want. You pick your own toppings. The restaurant has about a dozen different traditional toppings. But it also a few unusual toppings that include pulled pork, ribeye and Cheez Whiz. In addition there are some premium toppings like roasted red peppers, cream cheese, fresh mozzarella, anchovies and artichoke hearts.

Both the Philly and the pizza were on the menu before the restaurant closed. Anderson said much of the menu is the same. The food wasn’t the focus of the revamp. Instead, Anderson said one of the biggest changes was to get a much more local management staff at the restaurant. Anderson — who was with Lawrence-based Set ’em Jacks for nearly 10 years — said his strong recommendation to the owner was to have a Lawrence-heavy management staff. That’s how it has worked. All the managers in the restaurant are from Lawrence. Anderson — who has been in town for 14 years — actually is the manager who has lived in Lawrence the shortest amount of time.

He said having that type of staff in place should make it more likely that the restaurant really will reflect the styles and tastes of the local community.

One of those tastes is live music. A large part of the back-half of the restaurant previously was devoted to arcade games. Most of them, except for a handful like Pacman and Golden Tee, are gone. In their place is a live music stage. Anderson said he plans to book a variety of genres, with everything from country to reggae already on the schedule.

The venue won’t aim to compete with the longtime music venue The Bottleneck, which is next door. Instead, it hopes to complement its offerings. On nights when The Bottleneck is having a show, Grinders will try to have music that starts earlier in the evening. The shows won’t require a ticket and will be open to all ages. Anderson is thinking Grinders could become a good preconcert stop for those planning to go to The Bottleneck, or might be a place for people who are wanting just a smaller taste of the live music scene.

“The plan is just to bring more live music back to the block,” he said. “Between The Bottleneck and us, there is a good chance there will be live music when you come down.” 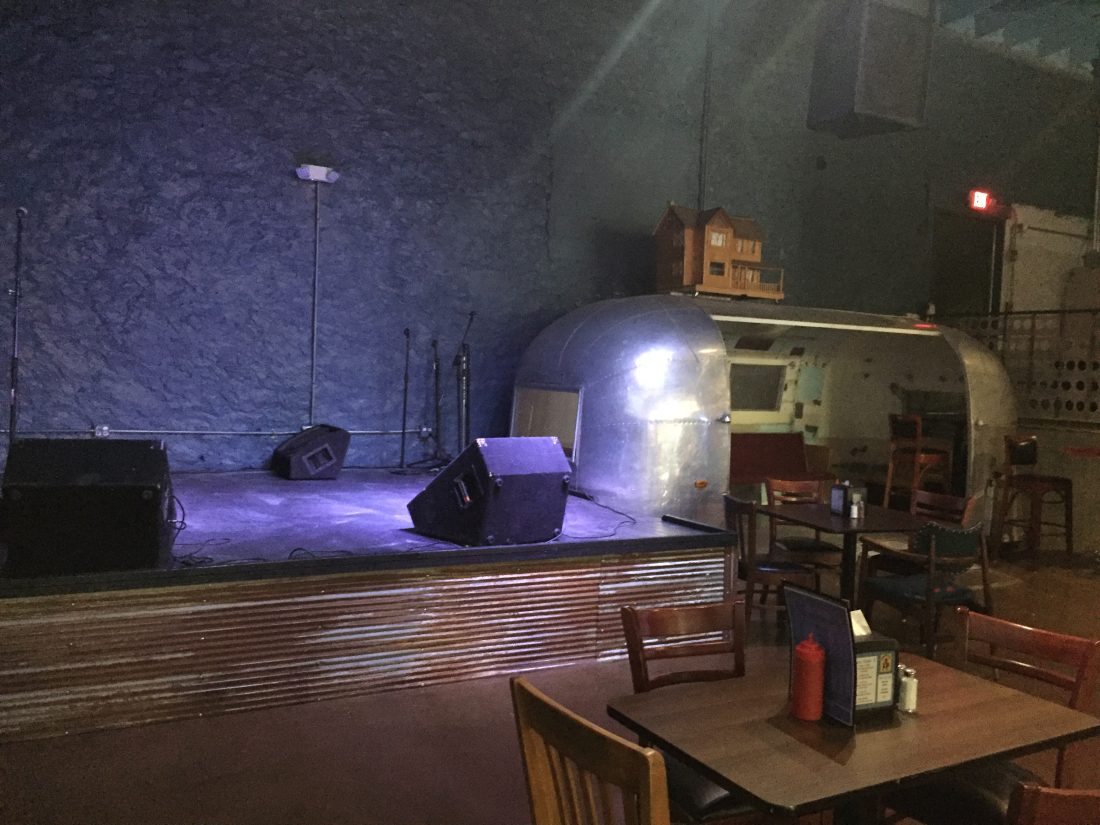 Lawrence’s Grinders location has added a stage for live music. The Airstream camper next to the stage will be used as a “green room” for bands, or just for customer seating.