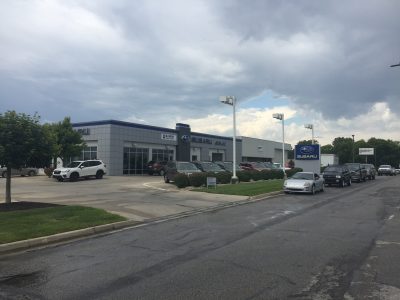 A few news and notes from around town:

• I don’t know if you ever wonder what causes a Kansas City company to decide to expand into Lawrence, but I do occasionally. Most of the time, the answer is college kids. But every once in awhile, it is Goldilocks. At least that is what I’ve found as it relates to some of the big changes happening in the local auto market.

The change is now official at one of Lawrence’s largest auto dealerships. Manhattan-based Briggs Auto Group is out and Kansas City-based McCarthy Auto Group is in at two locations near south Iowa Street.

We reported in March that McCarthy had reached a deal to buy the Lawrence Nissan and Subaru dealerships from Briggs. But the deal seemed slow to materialize. Indeed, McCarthy officials recently confirmed that completing the deal with various manufacturers and others took a bit longer than expected. But McCarthy held some festivities last week formally announcing that the dealerships are now under the ownership of McCarthy.

John McCarthy, chairman and CEO of the McCarthy Auto Group, was on hand for the event, and I got a chance to ask him why he wanted to expand into Lawrence. He cited the Goldilocks factor. Lawrence is living in an awfully nice spot right now. It is not too large but also not too small.

“It just seems like there is a close feel here still,” McCarthy said. “It is the type of community where you can still build a lot of relationships. I love that the community still has neighborhoods.”

McCarthy has been in the auto business in Kansas City for about 30 years. He operates nine dealerships in Missouri and the greater Kansas City area. The closest dealerships to Lawrence had been in Olathe. But he cited an operation that he owns in Sedalia, Mo., as perhaps being most similar to what he’s looking to do in Lawrence. Like Lawrence, Sedalia isn’t part of the larger Kansas City metro area. In that community, the dealership has gotten involved with several Sedalia-based youth organizations and other nonprofits. He thinks the dealership will take a similar approach in Lawrence.

“We definitely believe in the idea of you receive when you give,” McCarthy said.

As for the auto dealerships, McCarthy said big changes aren’t planned to the facilities — both are located in the Lawrence Auto Plaza near 31st and Iowa streets. Instead, the company is focused on getting McCarthy people and processes installed at the location, which he said should improve the service customers receive after a sale.

“We are looking to establish relationships with our customers for years,” McCarthy said.

• The last year has produced a lot of change in the auto business in Lawrence. Remember that Lawrence-based Dale Willey bought both the Honda dealership and the Dodge Chrysler Jeep Ram dealership, while the owners of Lawrence Kia have added a Mitsubishi dealership, among other changes. Now the question may be whether we are about to see a year’s worth of change related to the grocery industry.

The surprise announcement that Hy-Vee is closing its store on Sixth Street in November has lots of people wondering whether a new player will try to enter the Lawrence market by taking Hy-Vee’s west Lawrence location. Plus, there continues to be talk of a downtown grocery store, with the latest thought being that one will locate in the old Journal-World printing plant near Sixth and Massachusetts.

Indeed, local speculation will be worth keeping an eye on. But it also is worth watching some of the national news coming out of the grocery industry. It sure looks like the idea of having groceries delivered directly to your home is about to get a lot more competitive.

Amazon and its delivery service that uses Whole Foods have gotten a lot of attention, but last week retail giant Walmart announced a plan to compete. The retailer announced that it plans to bring a Delivery Unlimited Service for groceries to 1,400 stores later this year. The company is offering a $98 a year plan that will allow customers an unlimited number of grocery deliveries, as long as each order is greater than $30, several national outlets have reported.

It is not clear if or when the service may make its way to Lawrence. The Walmart website is touting that grocery delivery is now available at the south Iowa Street store. A tab on the website indicates that is a new offering. How broad of a delivery area the store has and whether it is part of the new unlimited delivery program were unclear.

But the fact that delivery is now available from the Lawrence store seemingly means the unlimited delivery option is on its way. A press release from the retailer states the service will be available in all 200 metro areas where Walmart currently is offering grocery delivery.

Certainly, Walmart is not the only grocer offering such services. Dillons, Hy-Vee and many others are in the business, but the trade journals I monitor seem to think this latest move by Walmart represented a significant escalation in the home delivery grocery movement.