A look at how gasoline prices are changing as new competition comes to Lawrence; not all parts of town are benefiting 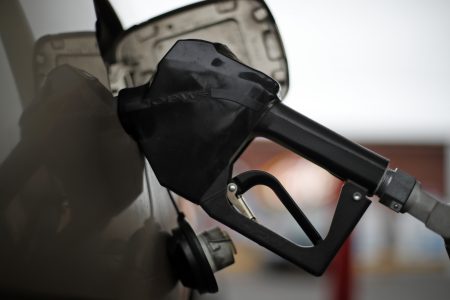 Big swings just aren’t for the playground anymore in Lawrence. You’ll also find them as you drive around town looking for the best gasoline prices.

After years of gasoline prices being pretty much the same no matter where you drove in Lawrence, there are now noticeable differences around town. The differences seem to be centered on the new Casey’s General Store at 1703 W. Sixth St.

That store, which is the first Casey’s in Lawrence, is selling standard unleaded gasoline for $2.34 a gallon. The convenience store across the street and just to the east of Casey’s is selling gasoline at $2.39 a gallon, which is also the price the Cenex location in North Lawrence is advertising.

Granted, there are many other pockets around town I didn’t check Tuesday morning. For instance, I’m not sure whether the lower prices are extending westward on Sixth Street. Maybe some of you fine readers noticed this morning. If so, make a mention in the comments online.

But clearly, Lawrence’s gasoline market is in a little bit of flux right now. For those of us who watch gasoline prices, the question is whether this is a new normal or whether it is short-lived. Casey’s has only been open a little more than a month. Perhaps the chain is running prices artificially low to attract business while it is new.

I’m not sure that is the case, though. The $2.34 a gallon is much closer to what Casey’s is selling gas for in nearby communities than the $2.45 a gallon that is prevalent throughout Lawrence. As I’ve reported many times over the years, gasoline in communities as close as Eudora has been significantly cheaper than in Lawrence. The main difference for the longest time was those communities had a Casey’s and Lawrence didn’t.

That will be the thing to watch: Will Casey’s view the Lawrence market significantly differently from how it views its other nearby markets? In other words, will Casey’s settle into a pricing strategy that sees gasoline being 10 cents to 20 cents a gallon more expensive than it is in communities that are just five to 10 miles away? We’ll see.

If the answer is no, then things may get even more interesting. Casey’s is still planning to build a second store in Lawrence. Although work hasn’t yet begun, City Hall officials tell me Casey’s is still moving forward with plans to build on the site of the former Steak ‘n Shake restaurant just west of 31st and Iowa streets.

If Casey’s is going to be more aggressive in pricing, then that may spark more competition in the southern part of the city once that second store opens. No official word on when that store may open, but it obviously is months away given that construction hasn’t begun.

• For awhile in late 2018, Lawrence residents were experiencing some of the cheapest gasoline prices not only in the state but the entire country. The fuel survey conducted by the auto and travel club AAA found Lawrence fuel prices were the 14th lowest of any metro area in the country.

But the same survey by AAA is now showing a more normal pattern: Lawrence is tied for the highest gasoline prices of any metro area in the state. Lawrence is tied with the Kansas City, Kan., area. But, to be fair, Lawrence gasoline prices aren’t that much higher than they are in Topeka, which isn’t always the case. Lawrence prices are quite a bit above the statewide average, though. The statewide average checks in at $2.34 a gallon. Here’s a look at the averages for the metro areas.

We are all doing better than last year, though. At this time in 2018, gasoline prices were averaging $2.74 a gallon in Lawrence and $2.66 a gallon statewide.

If you are getting ready to travel elsewhere in the state, here’s a look at a Kansas map from AAA that gives you an idea of how much fuel prices are by county.