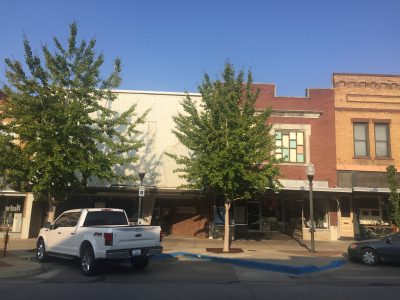 The former Prairie Patches building at 821 Massachusetts St. is set for a major renovation. Plans call for the white facade to be removed and for a more original looking front to take its place. The building will feature a multi-paned, colored window like the one to the right of the existing building.

Uber may come in handy today when you don’t want to carry a pocket of quarters and mess with parking meters in downtown. But years ago, an Ober’s was the handiest of places, especially if you had a fancy turkey pull on your calendar.

Before you think I’ve had one too many pulls of something, let me explain why I’m bringing up the name of a long lost Lawrence business. A large Massachusetts Street building is getting a major facelift, and it is going to end up looking like it did in the early 1900s when it housed Ober’s, your “Head to Foot Outfitters.”

You are probably more familiar with the building at 821 Massachusetts St. as the former home of Prairie Patches, a longtime embroidery and gift shop that closed after more than 25 years on Massachusetts following the retirement of its owner.

As the photo above shows, the building is probably most distinctive for what it doesn’t have — any upper-story windows. Instead it has a big white facade that makes a salesman with barrels of white paint very proud, but probably doesn’t do much for downtown architectural aficionados.

As we’ve reported, the building was purchased by Lawrence businessman Doug Compton, who owns multiple properties downtown. He’s filed plans with the city to get rid of the facade and bring back a much more original look to the building. Lawrence-based Paul Werner Architects is designing the restoration. The plans show that the old windows — which featured multiple panes of colored glass — once again will become a prominent element of the building.

The final product may not look exactly like the photo below, but it will be close. The photo was included as part of the plans as a reference point for what is to come. 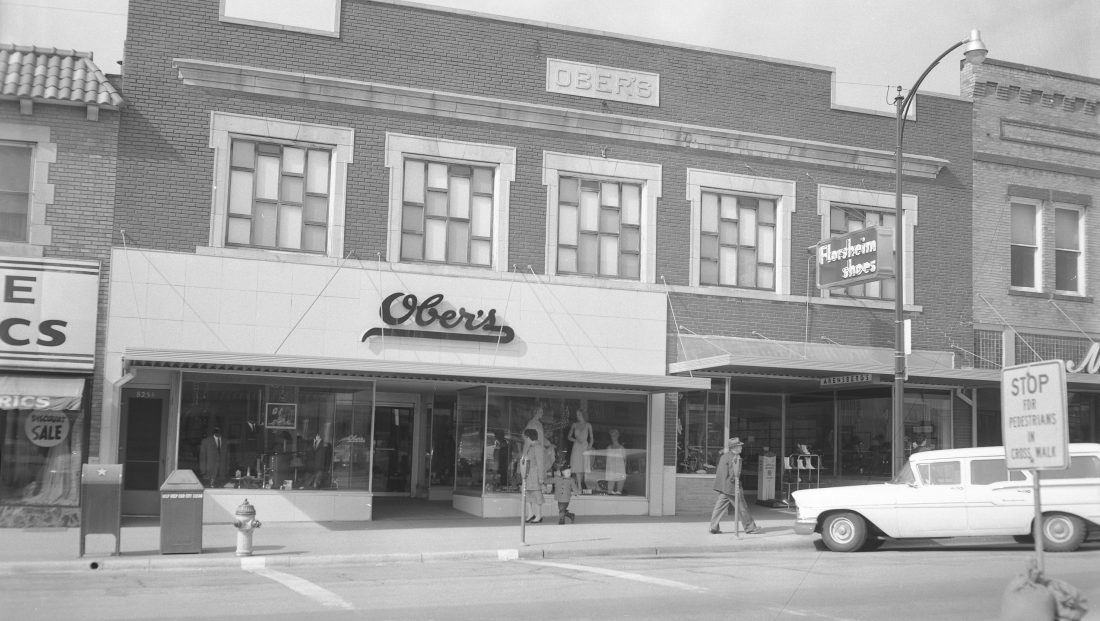 This undated photo shows a picture of the old Ober’s clothing store at 821 Massachusetts Street. The building is set to undergo a renovation that will return the facade to a look similar to the old Ober’s design.

The line drawing below shows more details about the actual plans Paul Werner Architects has filed with the city. 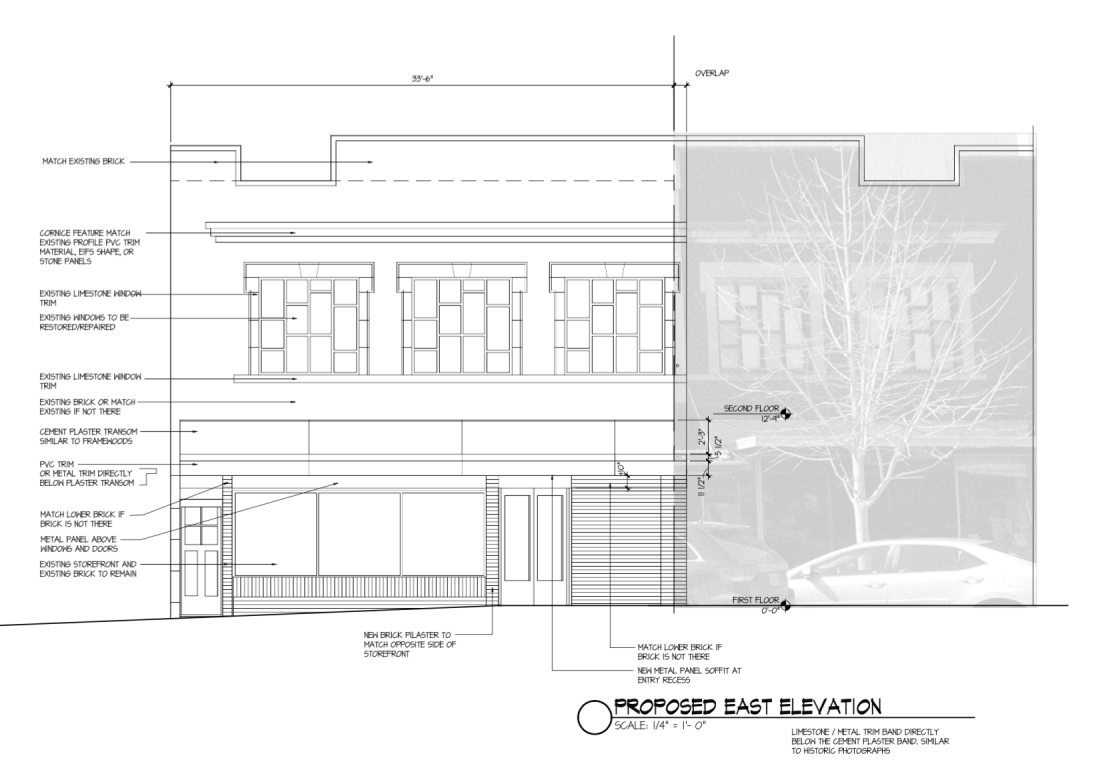 photo by: Photo courtesy of: City of Lawrence/Paul Werner Architects

A rendering of the proposed design for the 821 Massachusetts Street building shows how it change the look of the existing structure.

The plans don’t show that the stone block with Ober’s embossed on it will remain. Regardless, it is still fun to remember that old business, which I know very little about. My friend Mr. Google told me it was a men’s clothing and shoe store. This article from a 1920 national business magazine is a lot of fun. It tells how the store kept file cards on thousands of customers, noting things such as whether they were golfers, whether they were in a fraternity, whether they had children and much more. The store’s owners then would use that information — including student data it got from the university — to send out individual letters to personally invite people to the store.

“If the Phi Gamms are going to have their annual pig dinner and dance on a Friday night, Harry Walters of that fraternity receives a letter on Monday with a few suggestions on the proper togs for the occasion,” the October 1920 article in Business magazine notes.

But don’t think that Mr. Ober was only a Phi Gamma man. The article also mentioned that Beta men would be sure to get a letter prior to the fraternity’s annual turkey pull. But Ober certainly was a fraternity man. The article notes that fraternity men are naturally the best-dressed on campus. And as a 1920 letter to a recently enrolled student notes, “the store has devoted its life, you might say, to the careful study of the distinctive tastes of college men.” Further, from the letter to Mr. Edward H. Jones of Eskridge, Kan.: “We believe you will find it advantageous to wait for your fall outfit until you come to Lawrence. It won’t take us but a few minutes to fit you out, and ‘college styles are different.'”

Fun stuff. As for the new look for the old building, Compton told me construction work should begin in the coming days. He said the search continues for a retail tenant on the ground floor. The second floor — which is empty now — will be converted into office space. Current plans call for two large executive offices, although it may be divided up differently depending on who takes the space.

Compton said he’s excited about how different the building will look.

“I’m sure at one time that facade was appropriate, but it is not to my taste,” Compton said. “I just want to bring it back to its original look.”

• I’m also waiting on word of a new retail tenant to take the space formerly occupied by The Buckle at Eight and Massachusetts streets. Compton confirmed to me that he has reached a deal to sell that building, which has been one of the larger vacant spaces on Massachusetts Street. The clothing chain The Buckle moved out of the space in early 2017, and it has been empty ever since.

I’ve certainly heard that the new owner intends to use the space for retail uses rather than a restaurant or something like that. I don’t have the identity of the new buyer yet, but I’m working to get it, which of course, may shed light on what’s to come in the space. 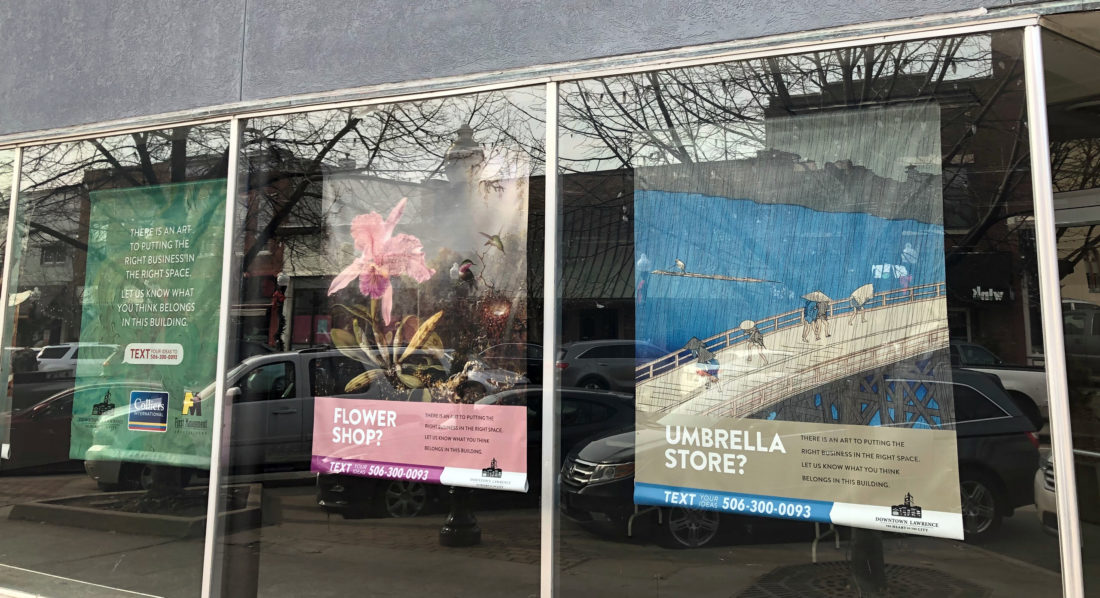 Downtown Lawrence Inc. has put up a series of banners in the window of the former Buckle store at 805 Massachusetts St. The vacant store is pictured Friday, Dec. 7, 2018.