As city posts lackluster growth of families, a downtown business that serves children is set to close 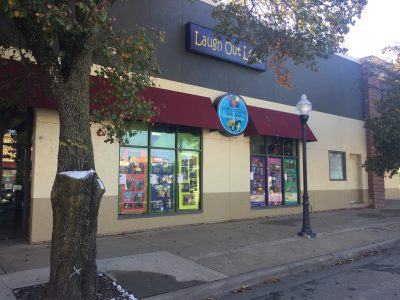 The Laugh Out Loud Family Zone, on 10th Street between Massachusetts and New Hampshire streets, is pictured Thursday, Oct. 31, 2019.

The days around Halloween are a good reminder of why kids need a place to burn off excess energy. (Even unloading the family U-Haul of discount candy doesn’t wear them out.) Soon, area parents may have one fewer place to take their kids. The owners of Laugh Out Loud Family Zone have announced they are closing their business early next year.

For nearly eight years, Laugh Out Loud has offered indoor playground space, a rock climbing wall, a puzzle and game room, kids karaoke and other activities at its location near the corner of 10th and Massachusetts streets. It has been great fun, but it hasn’t been great business.

“It has never been a profitable business,” said Christie Peterson, who owns the business with her husband, Charles. “But, while profit was a goal, it was never the driving force.”

But now Peterson needs to spend more time with her two kids. She said the business would close at the end of April, although she is holding out hope that somebody else decides to buy the business and keep it open. She said some discussions were underway with people who both were interested in keeping the business as a for-profit enterprise or converting it to a nonprofit entity.

Peterson said the nonprofit idea was intriguing. It would allow the business to apply for grants and other such assistance that a for-profit business often doesn’t receive.

“I think it is a great model, but you have to find the movers and shakers to make it great,” she said. “I don’t have the expertise in the nonprofit world to do that.”

If someone doesn’t come along to take over the business, Peterson said she planned to become an advocate for local government to become more involved in providing activities for children.

“I’m going to start showing up at City Commission meetings advocating that Lawrence needs a children’s museum, which is basically the role that we have tried to play,” Peterson said.

Her research has found that communities similar to Lawrence in size have nonprofit children’s museums, she said. The Iowa Children’s Museum, which is just outside Iowa City, is the one she has studied most closely. It has 28,000 square feet of interactive exhibits and play areas. It is a nonprofit organization that receives a mix of funding from governments, economic development organizations, private businesses and individuals, according to its website.

Peterson said she thought such a venture could be a good investment for the community. Some census numbers show Lawrence’s growth in families with young children has been lackluster in recent years. Athough not all census numbers paint a negative trend for Lawrence family numbers, one that does is a statistic that measures the number of households that have a family member younger than 18. In 2017, Lawrence had 7,583 households. That was down nearly 2% from 2010. That drop seems odd for a community that overall is posting population growth.

Although I didn’t do a comprehensive analysis, I did quickly look at a few other area communities that are generally growing. Olathe and Overland Park — long havens for families — saw such households grow by about 2.5%. Several college communities, though, really saw much higher growth of households with kids. Columbia, Mo., posted growth of about 8%, Ames, Iowa, about 9%, Manhattan about 10% and Iowa City about 13%. For whatever reason, Lawrence looks much different in that regard.

Though Lawrence’s decline hasn’t become a crisis yet, that’s the type of trend that can create long-term pain for a community. The school district already is seeing some years — including this year — where its overall enrollment has declined. The community will be in an odd position if it has spent tens of millions of dollars on school building improvements and there are consistently fewer students in the district.

Peterson said she didn’t know why Lawrence’s population of families with children wasn’t growing more rapidly. But, she said, it is worth asking whether part of the reason is because there are not a lot of children’s activities in town.

“So many people have told us that there are already so few things to do for children in town,” Peterson said.

Peterson said many parents found places like Laugh Out Loud really important. She took the unusual step of announcing the closure of the business months before it happened, in part, because the business sells multimonth memberships. Since making the announcement, she’s had an outpouring of parents tell her that the business has made their lives a lot easier.

Peterson said it was not unusual during weekdays for parents to allow their children to play for hours at a time while the parents sit to the side with a computer.

“I’ve had people get their degrees online while their children are here playing,” she said.

Another customer largely wrote a novel while sitting on the sidelines of the play area.

Peterson said she hoped to know in the next couple of months whether someone else would be taking over the business, but said her decision to exit the business after April was firm.