Local sales tax collections fall for the month; Lawrence on the edge of moving into negative territory 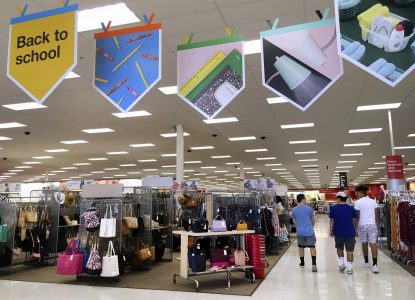 In this July 31, 2018 photo, shoppers walk into a Target store in Methuen, Mass. (AP Photo/Elise Amendola)

I certainly understand the temptation to go cheap when doing back-to-school shopping. When my son heads off to college, I’m going to make him grow his own bean-bag chair. Maybe some Lawrence shoppers got into that mode as well, as the latest sales tax report for the city showed some weakness during the important back-to-school shopping season.

The city recently received its sales tax check for October, but because of lag times in the reporting process, the figures from the October report actually show sales that were made more in the August time frame.

The numbers show sales tax collections in Lawrence fell by 2.3% — or about $52,000 — compared with the same period a year ago. The one-month downturn in Lawrence was a little steeper than what happened in other communities. Communities, on average, saw a decline of 1.4% for the month, according to figures from the Kansas Department of Revenue.

The Lawrence decline ended a streak of four straight months of the city posting year-over-year increases in sales tax collections. That midyear winning streak was much appreciated because the first part of the year had the city on a downward trend.

Combine the slow start to the year with the relatively strong summer, and you get a year-to-date total that basically is a wash. With 10 of the 12 reporting periods in the books, Lawrence’s total sales tax collections for 2019 are 0.2% greater than the same period a year ago. Here’s a look at how Lawrence’s year-to-date totals stack up with some of the other large retail centers in the state:

Normally a drop in sales tax revenues would be a pretty big dent to the city’s budget. However, as we’ve been reporting all year, the city has seen a real spike in the amount of use taxes it collects. People pay use taxes when they buy items online or when they buy an item at an out-of-town store but have it delivered to their Lawrence home.

The city hasn’t yet released its monthly budget report for October. But the September report showed that combined sales and use tax collections for the city were about $700,000 greater than a year ago. Collections also are coming in slightly above what the city budgeted to collect in 2019. Collections are about 0.3% above budget through September, according to the report.

But if October sales tax collections are the beginning of a new trend, the city could face a budget shortfall by the end of the year.