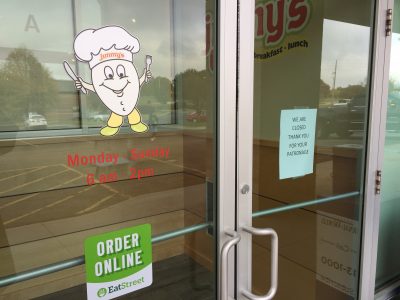 Jimmy's Egg closed both its Lawrence locations recently, including this restaurant at Bob Billings and Wakarusa drives, and its downtown location at 10th and Massachusetts streets.

One early sign of trouble for the new Jimmy’s Egg restaurants in Lawrence was when adult customers would come with crayons in hand to scrawl “(Expletive) Kobach” on the diner’s tables.

But the trouble grew from there, the diner’s owner said, with some people writing the same phrase on his car and smearing excrement on its windshield and door handles. Where the trouble was going to stop was unclear to local franchise owner Morrie Sheets, so he closed the two Jimmy’s Egg locations in Lawrence on Monday. Both the downtown location at 10th and Massachusetts streets and the West Lawrence location near Bob Billings Parkway and Wakarusa Drive had been open for less than half a year.

“I hate it because I love that city, but it has become so radical,” Sheets said. “I didn’t really have a choice. I had to do something before someone got hurt.”

Sheets, though, does know Wink Hartman, who was Kobach’s running mate in his unsuccessful bid for the Kansas governor’s seat in 2018. Hartman is a Wichita businessman who was an early investor in the parent company of Jimmy’s Egg. As such, Sheets said Hartman basically served as his “banker” on the Lawrence deals but played no role in the operation of the Lawrence businesses. He said Hartman has been his banker for 10 years, well before Hartman became Kobach’s running mate. For his part, Sheets said he’s largely nonpolitical.

“I just got caught up in all of this,” he said.

Kansas campaign finance records show that Sheets and his household donated $4,000 dollars to Hartman’s campaign in 2017 and $2,000 to Kris Kobach’s campaign in 2018. He also gave a $100 contribution in 2017 to Kelly Arnold, the then-chairman of the Kansas Republican Party who briefly ran for Kansas Secretary of State. 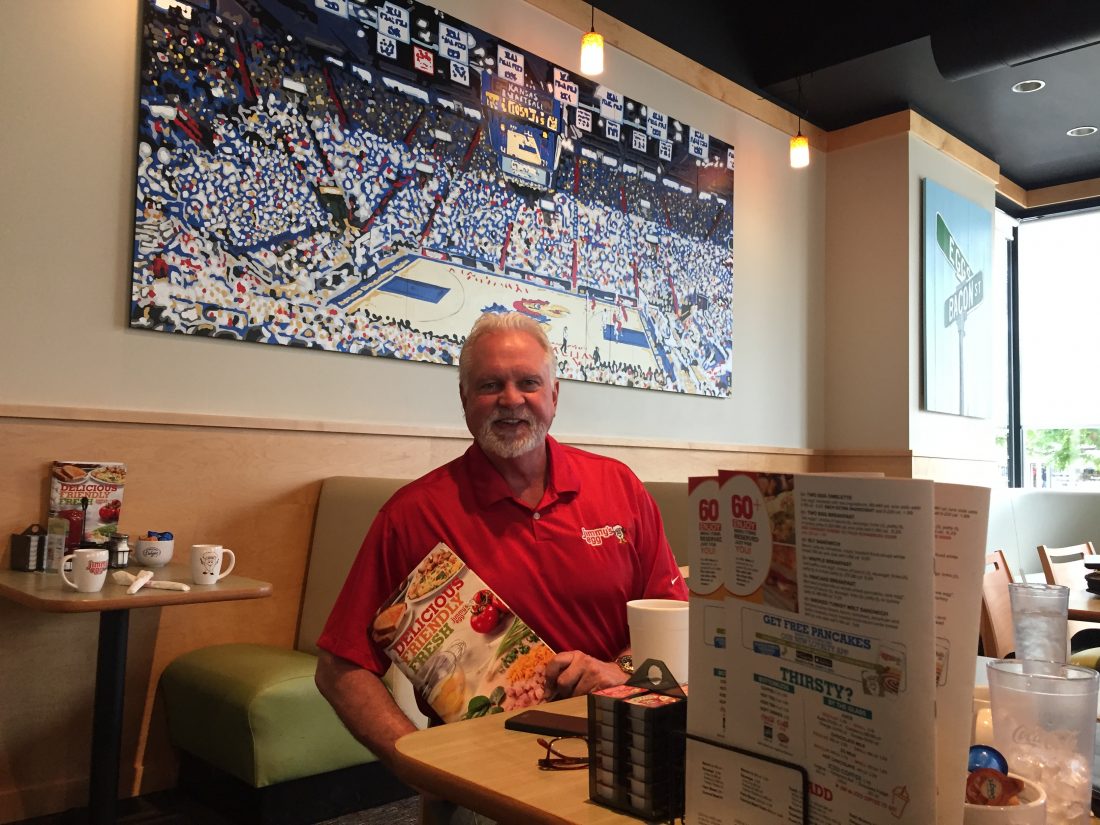 Morrie Sheets, managing partner of the Lawrence and Kansas locations for Jimmy’s Egg.

Many Lawrence residents quickly became aware that Hartman was part of the Jimmy’s Egg brand. The Lawrence store at 10th and Massachusetts streets was preparing for its opening during the gubernatorial campaign, when Kobach and Hartman were frequently in the news. The original article about the restaurant chain coming to Lawrence mentioned Hartman’s connection to the chain.

Sheets said several Lawrence-based internet message boards soon were having regular conversations about the restaurant and its connections to Kobach. Sheets said that no matter how much he tried to tell people that Kobach had no role in the restaurant, a significant group of people continued to insist that if you disagreed with Kobach’s politics, you needed to boycott the Lawrence restaurants.

“There are a bunch of hatemongers out there,” Sheets said of one particular message board about Lawrence activities. “It is tough to beat that when they are writing hate stuff.”

Sheets said closing the Lawrence restaurants just months after they opened cost him about $1.4 million in business losses.

“And the funny thing is, I don’t even know Kobach,” he said. “Actually, it is not funny losing that much money.”

Sheets, who owns Jimmy’s Egg locations throughout Wichita and Kansas, said he decided to open the two restaurants in Lawrence, partly, because of how highly he thought of the Lawrence community. He attended the University of Kansas about 30 years ago and has continued to come to the city for university connections.

“The whole market has changed in the 30 years since I was there,” Sheets said. “Everybody used to love everybody.”

Sheets said he was particularly sorry about what happened to employees with the closing. In addition to bearing the brunt of the anti-Kobach rhetoric, they also suffered the shock of suddenly losing their jobs.

“I met some nice people up there and had great employees,” Sheets said. “I’m just crushed, but life goes on.”

He said he’s considering the closings as another lesson learned in Lawrence.

“I guess I’ve gotten more out of my KU education,” Sheets said. “I went to KU once and now I’ve been back and learned that it is a different town.”

The Journal-World unsuccessfully reached out for comment to Hartman and also tried to make a connection with an anonymous user who started one of the original online discussions about Kobach and Jimmy’s Egg.